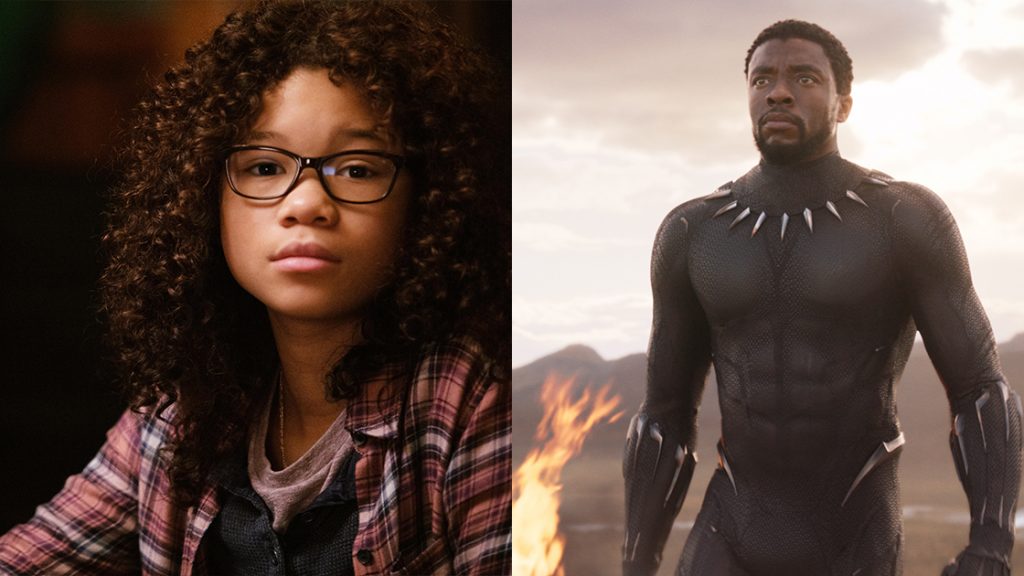 Black Panther and A Wrinkle in Time Dominate the Box Office

If you’ve gone to see Black Panther or A Wrinkle in Time (or, likely both), you’re a part of history unfolding at the box office. With $41 million this weekend, Black Panther held as the #1 movie in America, and A Wrinkle in Time was a close #2 at $33 million. This weekend pushed Black Panther over $1 billion worldwide, leapfrogging Rogue One and landing at #21 of all time box office sales. These are impressive stats to be sure, but what makes them so inspiring is that both films were made by black directors.

The box office race can be competitive and it can be a race to the top spot. Black Panther director Ryan Coogler and A Wrinkle in Time director Ava DuVernay seem to have nothing but respect and admiration for each other. At the January Black Panther premiere, DuVernay shared an image of their films posters side by side and shared how the two edited their films next to each other on the Disney lot.

We edited our films across the hall from each other for 8 months. We talked in our edit bays, on walks around the lot. About our films, our dreams. Tonight, his comes true. On my way to the #BlackPanther premiere with a full heart for my fam, director extraordinaire #RyanCoogler! pic.twitter.com/lrxBNRsqeC

For the opening of A Wrinkle in Time, Coogler returned the affection by writing an emotional letter to DuVernay for ESPN. Coogler noted not only what a capable and creative storyteller she is, but also how DuVernay is single handedly tearing down barriers to diverse creators.

“She made a show called “Queen Sugar” and mandated the use of female directors and key creatives a full two years before the great Frances McDormand shared with the world what an inclusion rider was,” Coogler wrote. “Ava is inclusion, equity and representation.”

Active on Twitter, DuVernay answered a fan question today about inclusion riders – an option for A-list talent to demand a diverse cast and crew in their contract. DuVernay has a history of tapping talented women and minorities for her projects, and A Wrinkle in Time was no different in front of and behind the camera. DuVernay said she didn’t need to be contractually obligated to have a diverse cast and crew. She just picked great people.

The choices that Coogler and DuVernay made on set are creating a precedent for diverse storytelling. They are undeniably proving that a diversity of voices produces stories that people want to see.