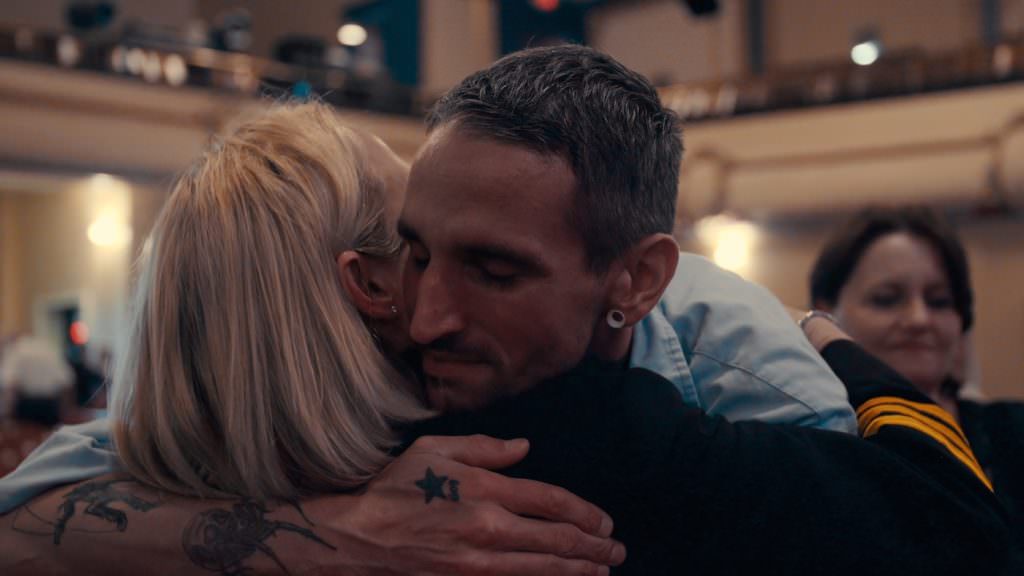 Director Elaine McMillion Sheldon is a native of West Virginia and saw the consequences of opioid addiction in her own community.

In her short documentary Heroin(e), which is now streaming on Netflix, she takes a closer look at the crisis while focusing on three female leaders who are making a difference on the ground.

The feature is set in Huntington, West Virginia. In the movie’s opening moments, the film notes that Huntington “has been called the overdose capital of America” and “its overdose death rate is 10 times the national average.”

Instead of focusing on the community’s pain, Sheldon focuses on the hope exemplified by a deputy fire chief, a drug court judge and a volunteer who delivers food and a Christian message to women on the streets. Jan Rader, Huntington’s deputy fire chief, is often called to the scene after a person has overdosed, hoping to save that person’s life. Patricia Keller serves as a judge in drug court, hoping to rehabilitate those who appear before her. Necia Freeman is a member of the Brown Bag Ministry. She offers the women she encounters food and a Christian message, hoping to get them to change their lives before it’s too late.

Each of these women serve their community day after day, working to stem this growing epidemic.

Sheldon and her husband Kerrin James Sheldon produced the film together and recently received an Oscar nomination in the category of best documentary short subject. It isn’t only the Academy that has embraced the film. The documentary has also earned the attention of individuals in the faith-based community, members from the medical community and public officials. Last Thursday, for instance, the film was screened for elected officials and the media at the West Virginia’s Governor’s Mansion. That screening was one of the many held to champion this film and further the conversation about this important topic.

I recently had the opportunity to chat with Sheldon about choosing this difficult subject, finding these three women, and how her opinion of the crisis changed over the course of filming.

Below is a slightly edited transcript of our conversation.

How did you originally choose this subject?

[The opioid crisis] is obviously something the whole nation’s waking up to and trying to figure out how to cope with but it’s something that my home state of West Virginia has been dealing with for a long time. We have an overdose death rate that’s twice the national average. I have classmates that I knew from middle school and high school that had overdosed. Some who were seeking treatment. It just got to the point where I felt like we needed stories about what was being done on the ground — about resilience — and so I wasn’t really interested in making a film that just added more grim statistics into the world because I felt like we were hearing a lot about a problem and not having conversations around solutions.

How did your original vision of this project compare to the final project?

I pretty much approach any documentary with an open mind of ‘what happens happens and that’s where we’ll go.’ I can’t necessarily say that we had a huge vision of where this would go. We really didn’t know where the stories would lead us. We had no clue that Jan would become the first female fire chief [in West Virginia]. We didn’t know how Mickey [a recovering addict revived by Rader and the fire department] would do over the course of a year. I can’t say we had huge expectations about where the film would go but it certainly kept us on our toes and the film becoming a 38 minute short [a parameter designated by the Center for Investigative Reporting] was really helpful. We had been filming with these incredible women and the Center for Investigative Reporting is who came on to fund short films about women making change so it was just the perfect alignment and helped us to narrow down the footage that we had already shot and go back and shoot more.

How did you originally choose these three women?

We first were interviewing people on the Mayor of Huntington’s drug control policy board and we were interviewing people on that board just trying to get a sense of how they were handling this and Jan Rader is on the drug control policy board as a member of the fire department and so we were introduced to her. Very quickly after that interview with her, [we] kept reaching back out…

It started with Jan and she’s so well-connected and we were able to earn her trust that she started introducing us to other people as well and that’s how we found the other two and then we spent time in drug court — not filming, just sort of observing and seeing how things functioned — before the judge allowed us to start filming and then we spent time with Necia Freeman. In the film, you see her go out at night but we filmed her in other scenerios as well that just didn’t fit into the short format… We wanted to keep throwing people in these different scenes with these women and feel the energy that they have on the ground cinematically.

How did you set limitations on what you could and couldn’t film especially in the scenes after overdoses occur?

The biggest agreement we had with the EMS and fire squad was that we wouldn’t get in their way so we were limited. Obviously the most important thing is ‘is that person [on the ground] being helped’ and so we were shooting in a way that we were trying not to invade their privacy so if we could avoid it, we were avoiding faces and those types of things especially with the women that Necia goes out and helps. We didn’t want to reveal them because that could hurt what she does every week. It could hurt the trust that she has with those women so we were trying to use her arm and parts of the car to block the women’s faces.

Then once the overdose victims actually were revived by EMS, I had a conversation with them [saying] ‘I just filmed this’ and then asked for their permission and then had them sign release forms…

In previous interviews, you talked about wanting to make this story because you’re from West Virginia. What insight do you think you bring to this subject that others might not?

Appalachia has been economically distressed for decades and the opioid crisis is fueled by that and certainly those statistics from an outsider looking in, you must think ‘wow, this place is completely helpless. What a depressing place. I can’t believe anybody would choose to stay there’ and the reality is that those things are very real but there are also people combatting those things with very little resources which is why it’s important to draw attention to them and give them a larger platform but I just think because we’re from here and because we have a passion for seeing this place not completely fail, we’re able to look through that poverty, look through the drug abuse, look through all those things and find a spirit within an actual human being that keeps them going.

These are a universal stories. It doesn’t matter what the crisis is. The most resilient humans are the ones that can find this sort of inner strength to keep moving forward day in and day out when seemingly it feels like they’re not making much of a difference. I think an outsider looking in would maybe miss the inner resilience and inner spirit of people because maybe they themselves haven’t witnessed it.

In what way did making this movie change your opinion of the crisis?

I think that when you look at this problem from far away, it seems kind of unsolvable and ‘how will we ever get out of this.’ When you’re able to get close to the people on the ground making the change, you realize how much difference one person who cares in the community can make and that recovery is possible. There are lots of people in long term recovery. They’re going to lead the effort that going to help make that change.

You recently received your first Oscar nomination for this film. Had you ever thought about that as a possibility or was it a complete surprise?

It was a complete surprise. We were really excited about it. We never considered it as a possibility. It’s a huge honor honestly working with Netflix and they’re able to market the film and get the film out to audiences where they actually see [it]. It has a huge impact on the visibility of the issue and the conversations we can start so it’s a huge positive for the topic and the film so it’s great.