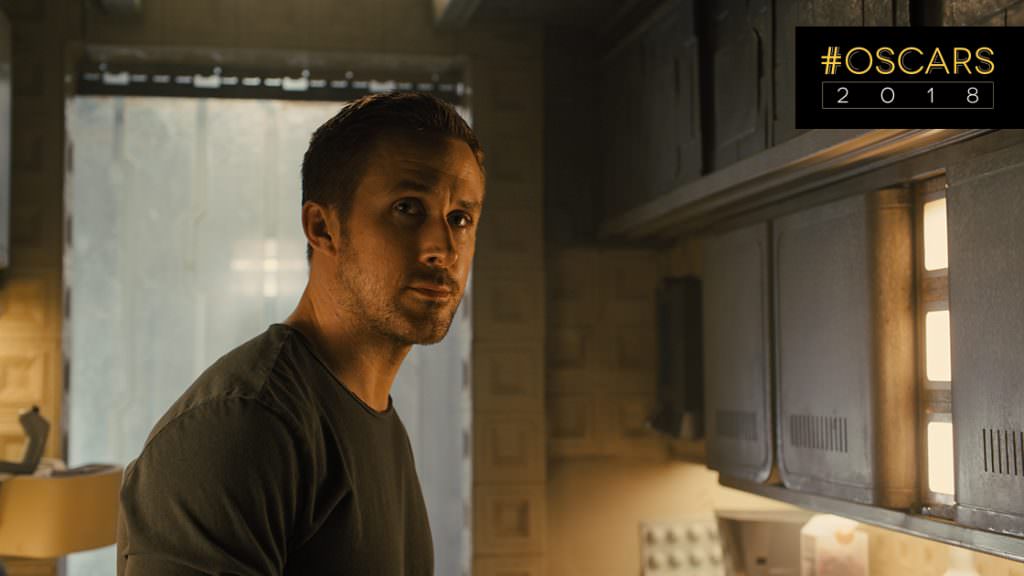 Doug Hemphill and Ron Bartlett are sound mixing legends. They’ve both been nominated for Academy Awards before – Hemphill for Life of Pi, Bartlett for Pi and seven other films. Yet, when they talk about their latest Oscar nomination for Blade Runner 2049, they are first and foremost fans. The pair worked with Blade Runner director Ridley Scott eight years ago on a re-master of the 1982 original. They can each tell you what they love about everyone else’s work on the film as eagerly as their own, and they both love the on screen and behind-the-scenes details. When director Denis Villeneuve called for them to work on 2049, they jumped at the dream opportunity.

“We had just watched Denis’s films and were great admirers of his work, but he called us,” Bartlett said. “We didn’t go after him, which was a real delight to get a call from someone with that much talent.”

Villeneuve had been quickly building an canon of impressive work, with titles like Prisoners and Sicario. Then came the gorgeous and intelligent alien contact thriller, Arrival, which solidified his immense abilities in the sci-fi realm. Bartlett emphasized that Villeneuve’s clarity of vision helped guide their work in the editing bay.

“[Director Denis Villeneuve] had such a keen sense of emotion and storyline of the characters and what they’re feeling and what it means to be human,” Bartlett said. “He really brought that out in the new one. I think that’s what makes it a really powerful film.”

“We were really responding to what Denis was trying to do thematically,” Hemphill added. “That brought forward a real road map for us for where to go emotionally with the track of the film, which I think we did very successfully. Expanding, contracting, what we call breathing. Letting the track breathe.”

The complex concept of designing, editing, and mixing sound in film can be difficult to grasp. When done well, as is the case for Blade Runner 2049, it almost seems so natural it’s easy to forget it’s been carefully engineered to tell a very specific story. Hemphill and Bartlett mixed hundreds of tracks to set the right tone.

“The analogy we would probably draw is like in life, there’s a lot of noise you want to get rid of,” Hemphill explained. “You want to focus in on the elements that are important for you to be happy as a human being. It’s the same in a movie. If you don’t have people who know what to get rid of, and who are able to ask if the sound makes the film better, and if it doesn’t make the film better, get rid of it. That’s what we’re doing.”

“You can put in all kinds of stuff, but if you’re not judicious about what you need or what you don’t need there, you’re doing a disservice,” Bartlett added. “If you don’t have those people to make those choices, you’re not going to get the story. It’s not going to be nearly as impactful or emotional.”

Hemphill admits that people often expect a detailed, mathematic explanation of their craft, but it comes down to instinct. As sound mixers, they focus on what sounds right for the scene.

“A lot of it is taste, but a lot of it is making judgment calls on what pushes the story and the narrative forward,” Hemphill explained. “What focuses it, delineates it, and moves it forward for the audience. So much of that comes down to taste.”

“It focuses you down to a very specific detail instead of giving you a wash of things,” Bartlett added.

“You don’t want to have to go to a movie and decide what you’re supposed to be listening to,” Hemphill laughed. “We’re supposed to help you with that. Our job is pointing you in the right direction.”

One of the most masterful aspects of Blade Runner 2049 is its intimacy. Fight sequences are very specific and shocking deaths are punctuated by silence. At times, less is more, and it makes intense sequences that much more wrenching when the sound is being masterfully manipulated, pared down, with only the most crucial, elemental sonic traces left. Rather than a pulsing bombardment of sound, Hemphill and Bartlett manipulate the levels to draw the audience in. In visual art, it would be the emphasis on white space. In sound, it is quiet.

“We’re pretty sneaky about setting something up and then, when you take something away, it has a really big impact even though you’re doing less,” Bartlett revealed. “It’s a set up for when you’re feeling very tense, but then we pull things away and it reveals something that’s more bucolic or nice and pleasing so you feel that release.”

“A good example is out in Las Vegas in the desert,” Hemphill said. “All you’re hearing out there is footsteps, and then it cuts to almost complete silence. It’s wonderful because it really gives you the space to go into the movie and enjoy it and be a part of the movie.”

K (Ryan Gosling) is openly a replicant in Blade Runner 2049, a major variance in storyline from the original film. His very life hangs on his ability to execute other replicants without feeling. The LAPD keeps his emotions in check with a baseline test in which he has to repeat a series of words and phrases. The assault of sound and seemingly arbitrary recitation is overwhelming.

“Our whole idea with that was to make it very oppressive and claustrophobic,” Bartlett explained. “It was so intense. When that shuts off, you’re like, ‘Thank God we’re out of there.’ That’s the feeling you want to get out of that. He has no freedom. He has no free will. That’s a key story for him as a replicant.”

The most dramatic release comes in K finally succumbing to his wounds alone in the snow. One of the most meaningful and tragic moments in the film comes quietly. Despite attempts to strip him of emotion, K proves a replicant who has a higher sense of purpose. He can feel.

“With K dying, for me that was such an emotional scene,” Hemphill said. “He becomes a human being. He sacrifices his own life for someone else. That was a big deal to me. I love that scene.”

Hemphill and Bartlett had endless praise for their extended creative team, including Oscar nominated sound editors Theo Green and Mark Mangini. The sound team collaborated to create an endless list of interesting effects in Blade Runner 2049 from the Spinners (flying cars) to the sea wall to the futuristic city and more.

“We did old mechanical stuff that was also married with very high tech stuff,” Bartlett explained. “The gene machine, where they’re looking at their genes and all that, was really fashioned over an old Moviola. We used a lot of cool clunky type sounds along with high tech sounds. It’s a great marriage of the two.”

Hemphill pointed to an unlikely source of inspiration.

“You’ve got to go back to your childhood to understand this,” Hemphill said. “Mark Mangini worked for Hanna-Barbera for years. Ron has done work in cartoons. I grew up on cartoons. You have a lot of the culture of these weird little mechanical sounds that really are our homage to what we grew up on with cartoons. As musical creatures, you respond to musical sounds. You’re hearing the evolution of that in the film, and I think it makes the film a lot better.”

The team put thought into not only specific sound elements, but also entire atmospheres. To really immerse the audience in the world of Blade Runner, they had to decide on the contrast between the different locations. Even within the city, being on the street is a different experience than being in an apartment.

“As far as outside with the billboards, the idea there goes back to the original Blade Runner with the rain and the different languages, the polyglot of people,” Bartlett explained. “We call that defiant chaos. You’re always focusing in on certain things throughout, but all of it had such a rich tapestry of everything going on at once. You felt like it was really impressive down on the street level. Then if you went up into the higher levels, like the higher buildings. You get up to the rooftop with K and Joi. It was very soothing with the chanting voice, the beautiful rain. It was levels of different emotion as you went from bottom to top.”

Ben Wallfisch and Hans Zimmer composed the film’s score. The team tapped into the original Vangelis Blade Runner score by using a Yamaha CS-80 synthesizer. The incredible score left multiple tracks to select from in each scene.

“It’s not like we arbitrarily said yes or no to those,” Bartlett explained. “Denis had a very specific focus in mind about what the score would sound like. We would go through and play all the tracks individually and let him decide what he liked and didn’t like. That would dictate what the cue did for the film. We would take the elements that were left and reposition and balance them with everything else to get that vision clear.”

“The whole idea that the music cue was to be an operatic movement from when they took off in the spaceships to finally K’s death, it’s supposed to be one big Aria or operatic event,” Bartlett said. “That really was what Denis was after. We had to take that kind of direction and figure out what we do with sounds with that to make it happen.”

Discussing the music, Bartlett and Hemphill turn back into undeniable fans.

“Hans wrote a melody for when you first go to the sea wall,” Bartlett said. “It’s such a beautiful moment in the movie.”

“The sea wall and they’re holding the sea at bay, and the sea and the oceans are where life begins,” Hemphill pointed out. “Those are all little things and they have a reason for being there.”