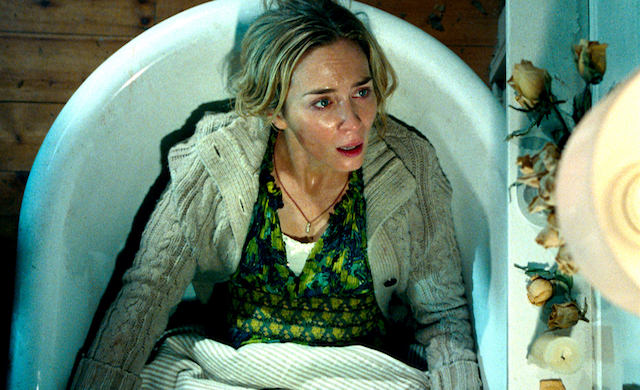 A Child’s Toy Turns Deadly in A Quiet Place Teaser

“If they hear you, they hunt you,” the trailer for A Quiet Place warns. A new look at the terrifying thriller aired last night during the Super Bowl. Though shorter than the first teaser, the spot offers a new look at the dangerous world the family lives in. The world has been plunged into silence as the spot opens with Emily Blunt standing in front of multiple television screens broadcasting a catastrophic event. There’s some kind of invasion, but is it human or otherwise? And how far does it reach?

The name of the game is silence. Make a sound and you’ll be killed. That’s hard enough for adults to do on a normal day, but it’s extra strenuous for the film’s two small children. Even innocent play could be deadly. Krasinski, who also directed the film, and Blunt’s characters are seen traveling through the forest with their children when their youngest accidentally turns on a toy rocket ship and the sound echoes through the forest. Krasinski rushes towards his son as something in the forest stirs, awakened by the noise.

The spot is full of horror movie aesthetics such as claw marks on the wall and Krasinski turning the corner, shotgun in hand and a wild look in his eye. The family of four are obviously fending off someone – or something. Just what is out there remains unseen, leaving us desperate to know what predator is hunting the family.

The trailer ends with the two children hiding in what appears to be silo, but they’re not alone for long as something jumps out of the shadows towards them before the scene fades to the title. The spot, like the teaser, is cryptic but definitely attention grabbing. We’ll be holding our breath wondering who is out there.