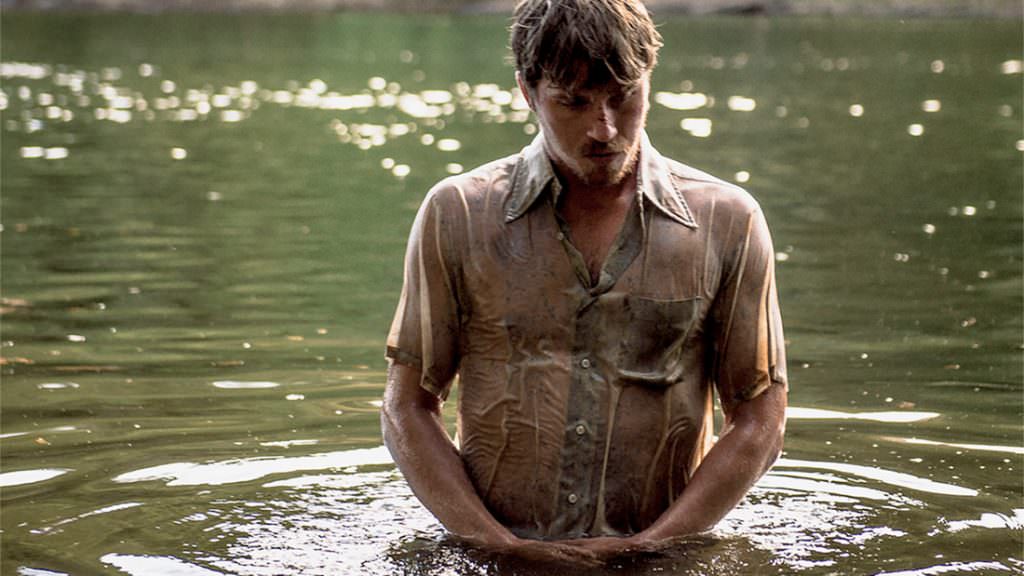 Sundance 2018: Burden Cinematographer on Lensing a Timely Look at Racism in America

Australian cinematographer Jeremy Rouse moved his wife and two children to a small town in rural Georgia in order to join director Andrew Heckler’s debut drama Burden. The film, based on an astonishing true story, is a part of this year’s Sundance Film Festival’s U.S. Dramatic Competition, and is one of the most timely films screening here—in a year in which many of the entries deal with, either directly or indirectly, our current, extremely anxious political climate, racism in America, and our values as a nation.

Burden is the story of Mike Burden (Garrett Hedlund), a reticent repo man living in a small town in South Carolina in 1996. Mike was orphaned as a child, and the man he ultimately looked up to, and now reveres, is local Klan leader Tom Griffin (Tom Wilkinson). Griffin stokes Mike’s racism, bitterness and animosity, turning him into a rising Klansmen. Enter Judy (Andrea Riseborough, absolutely everywhere lately, thankfully), a single mother who has no place in her life for Mike’s toxic worldview. Through Judy, Mike starts to question everything he’s “learned” from Griffin, and ultimately breaks from the Klan. This violent cataclysm leads Mike to Reverend Kennedy (Forest Whitaker), an African American preacher who has more room in his heart than Burden knew was possible.

While the above synopsis sounds almost unrealistically optimistic, it is, as we mentioned, based on a true story. Burden provides both an unflinching portrayal of the neo-Confederate heritage of the modern South and a quietly, cautiously optimistic story of how a single person’s change of heart speaks to what is still possible in a country that has yet to reconcile its racist past, which, as the Bard of the South William Faulkner wrote: “The Past isn’t dead. It isn’t even past.”

We spoke to Rouse about wading into this explosive material in explosive times, why being Australian offered him just enough critical distance not to get overwhelmed by the material, and how he approached filming scenes that he knew would be very, very difficult to watch.

What were your first impressions of the story?

I first saw a 60 Minutes story with the real characters, and I was completely blown away by the story itself, and the friendship that came out of their journey. As an Australian, I don’t have a first hand knowledge of American culture, but the themes are really clear, and I was really excited to get involved and try to find the language to create a world that’s really believable, and work on a subject that’s really important and timely.

What was going on in America during production? I’m curious about the timing of the shoot, and how you reacted to it as someone coming from Australia.

Trump was getting voted in when we were shooting, and it was really interesting, and troubling, that as we were filming, he was being publicly endorsed by the KKK. We were shocked at what was happening, and even though this film is set in the 90s, we really wanted to service the story and do justice to its timeliness. I wanted to find the film language that created a sense of truth and honesty, but that wasn’t too conspicuous. The camera work and the style of filmmaking needed to serve the actors and these intense scenarios as honestly as possible. Then Charlottesville happened, and it was just, wow, this is incredible that this is still happening, so this film just felt really important.

As a cinematographer, what’s your biggest challenge in approaching material like this?

One of the biggest challenges is speaking at length about the style. Andrew [Heckler, the director] saw it as handheld, off the shoulder and immediate. When you put a camera on a tripod, actors have to stop on a certain mark, and Andrew was really focused on not having to mark actors like that, to give them freedom. What comes with that is trying to find a style of handheld that’s observant, but also intimate.

In a film as emotional as Burden, and especially with you choosing handheld, is a lot of what you were doing with the camera reactive?

You’re definitely reacting to the energy of the actors, so if they’re not moving, I try to not move too much, and if they’re moving, I try to move with them. I try to let the camera settle and be still and observational when called for, and then in other, more intense moments, we inject a bit of energy into the camera movements.

How do you modify your technique when the story takes a darker, scarier turn?

It’s about building a tone and a feel for the whole film, so when the story is heavy and dark, I don’t feel I need to over amplify that with lighting or any of the facets of film language. So rather than do that, I try to create a naturalistic environment, and that suits creating a space that is believable.

How do you shoot the scenes that you know are going to be very, very difficult for an audience to watch?

There are a couple of moments that are really difficult, and at one point we discussed not even filming these scenes. They were that offensive, but we decided we had to, because this is what happened and this is the world. From a technical point of view, the question I asked was ‘How much does the viewer need to see, how graphic does it need to be for the viewer to understand what’s happening and be able to process it?’ It’s a scene by scene breakdown. We look at the information that we have, and how graphic what we’re shooting needs to be to relay that information. We ask ourselves how much we can suggest rather than show. It’s trying to find that balance between what’s acceptable and what’s difficult, and still have impact. For a cinematographer, this involves restraint in coverage, lens sizes, and, when they’re necessary, close-ups. It’s a scene by scene analysis of where to place the audience so they’re not being forced.

How much of an advantage, if at all, do you feel being Australian was while filming Burden?

I think it was an advantage, I suppose. I can completely understand this story, as we have our own issues with race, tolerance and co-existence, with our indigenous people. We grew up embracing immigration, but now we have this ‘White Australia’ kind of community, these small-minded conservatives. I feel I could look at this story, understand it, but also analyze it from a distance. Certainly to not be American and not be quite as emotionally invested was, perhaps, a help.

How much research did you do before filming?

What was interesting was when we were looking into the klan, seeing Mississippi Burning, but trying to actually understand who they are today, that was an interesting kind of analysis. Looking at who they are and what they stand for—they’re a community of people who are unhappy and lost, and they pass along this senseless hate from generation to generation. As Mike Burden sees in the film, there’s an opportunity to change, and if one person can change, more can too. But no matter where you are in the world, there are issues with race, and certainly Australia has them, too.

Where was the film shot?

The film’s set in Laurens, South Carolina, but we shot in Georgia. The production chose Georgia for its tax incentives. So we extensively scouted up to an hour and a half outside of Atlanta, and ended up finding a place called Jackson, Georgia, 90-minutes south of Atlanta. It’s the real south, and for me that was one of the most interesting things, I’ve ben to LA, New York, to all the kind of major American cities, but to be in the south was really one of the most interesting parts for me, as an Australian. I was shocked at how different it is down there, it’s a whole new experience, meeting people who run church organizations and wear NRA t-shirts. It was also really mind opening, too. My wife and two young kids stayed with me in a little cottage, with an old slave quarters in the backyard—that was really sobering to see.

What did you shoot on?

We shot digitally, on the Arri Alexa. I was hoping to use a set of Panavision vintage lenses, but I couldn’t find them, so we shot with some older lenses, two full sets, as I love older glass. I like lenses that aren’t too sharp, that 4K TV look is quite clinical in some respects, and unforgiving. So we settled on some old lenses, some Canon K35 lenses, with intense flares, and we used that for certain sequences or second unit photography landscapes, to get a more expressionistic look.

I’ve seen a number of incarnations, from first assembly all the way through, but when I finally saw the cut which we ended up color timing—it was really great, I was really excited. For the me the most important thing was seeing how incredible those performances are, between Garret and Andrea and Forest, and I felt thankful that I didn’t mess it up [laughs]. My job was to help give them the space to become these people, and hopefully when others see this film and see these characters, they come away with a feeling of hope…which seems especially important in these times.