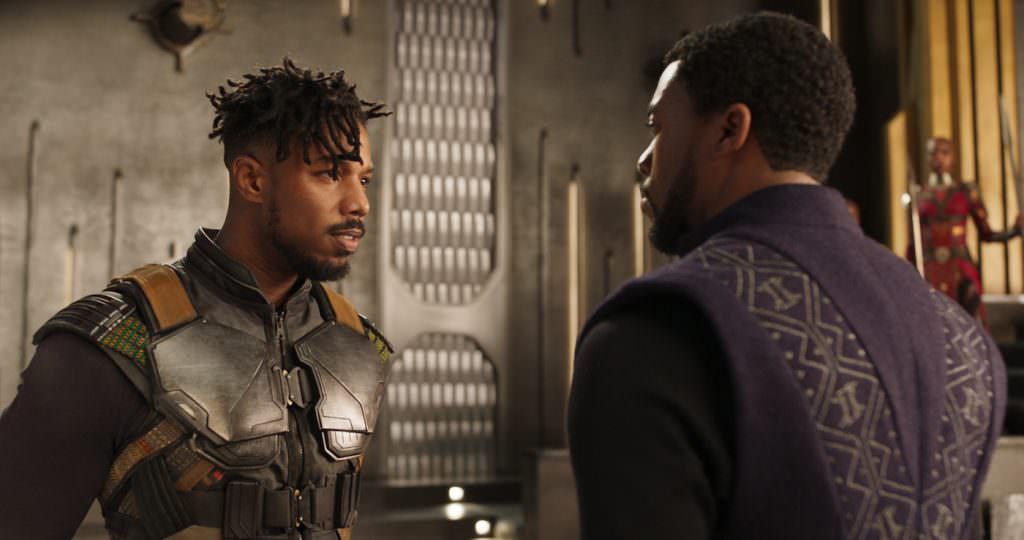 Marvel Studios had been promising a new Black Panther trailer during last night’s National Championship game, and they delivered in a big way. The new look at writer/director Ryan Coogler’s film includes fresh footage, a thumping new song from Kendrick Lamar and Vince Staples (Lamar is producing and curating the entire soundtrack), and a focus on the battle between Black Panther, now also known as King T’Challa (Chadwick Boseman) and Erik Killmonger (Michael B. Jordan, just as jacked as he was in Coogler’s Creed). Black Panther has yet to make a misstep—the marketing campaign has teased just enough to whet our appetites, showing us a Marvel film that looks unlike any in the studio’s history.

The focus here is primarily on Killmonger’s challenge to T’Challa’s throne. In one particularly riveting moment at the 1:03 mark, Killmonger appears to have T’Challa surrounded, and issues a list of demands: “I want your weapons. Your secrets. It’s all mine now.” At this point, he unleashes his gold-tinted version of the Black Panther suit, and the two go claw-to-claw in what’s likely to be one of the film’s most pivotal scenes.

There’s also a few lighter moments, showing the bond between T’Challa and his sister Shuri (Letitia Wright), who addresses him with  mock formality and then a fantastic Wakandan greeting. And a brief glimpse of a moment between T’Challa and some actual panthers lounging in a tree suggests a crucial moment in the film, one that might take place in the spirit realm.

And finally, this spot also functions as a closer look at the incredible world of Wakanda that Coogler and his team (including production designer Hannah Beachler, costume designer Ruth E. Carter and DP Rachel Morrison) have created. Wakanda has long been an important location in Marvel history, a mineral rich, highly technologically advanced and secretive nation where not only Black Panther reigns, but the materials for Captain America’s shield were sourced, but seeing it through the eyes of this incredibly talented filmmaking team has been one of the chief pleasures we’ve derived from the Black Panther trailers and spots thus far.

In five weeks time, we’ll finally see Black Panther in theaters when its released on February 16. Our guess is we’ll be parroting the same thing the new trailer states—all hail the king.