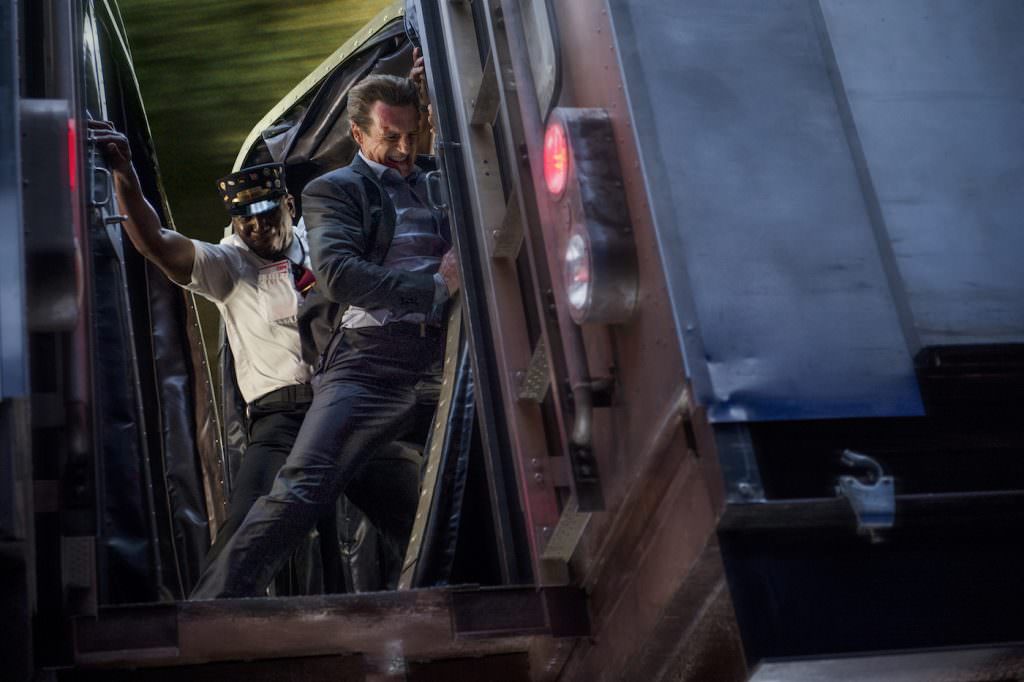 When cinematographer Paul Cameron got the call from Spanish director Jaume Collet-Serra to film The Commuter with Liam Neesom, the Los Angeles-based director of photography faced a daunting question: How do you spend an hour of screen time in the cramped confines of a train and make it look exciting? The answer came to Cameron in the middle of the night, he says. “I envisioned this rig, drew it out and sent it to pre production saying ‘Here’s what I think we should do.”

The tech-savvy Cameron, who helped pioneer high-def digital techniques in 2004 when he shot Michael Mann’s Collateral, decided to exploit the ceiling of the train car where Vera Varmiga’s Joanna challenges Neesom’s ex-cop Michael MacCauley to hunt down bad guys during his afternoon commute from Manhattan. This “train” was in fact a 30-ton set perched atop wheels, undergirded by a giant hydraulic jack and located inside a Pinewood Studios soundstage in England.

“I designed this custom camera rig that travels down the center of the car, but instead of moving along a track on the floor, it travels on the ceiling,” Cameron explains. Using Alexa Mini Arri cameras, a Stabileye Stabilized Head and Z Axis Pan device, Cameron automated the rig to move up, down and sideways as it tracked the action. “We could follow Liam in one direction down the center of the aisle, then move the camera to ‘arm’ around him and chase him back the other way, tracking over the other passengers’ heads as they sat in their seats,” he says. “We wouldn’t have been able to do that with a Steadicam.”

The movie’s big fight sequence appears as one seamless shot but actually required seven precisely blocked set-ups. Cameron says, “Jaume was very specific about where the actors would be and where the punches needed to happen, so we programmed those shots as motorized camera moves.” Director Collet-Serra also detailed a plan that spelled out close-ups, mid-range frames and wide shots. Cameron says, “He came up with this little bible for how to shoot the movie. When Liam first gets on the train, we’d only shoot with 30 to 75 millimeter lenses. Then for the next 21 minutes, we only used 14 to 21 millimeter lenses. Jaume had this very disciplined way of shooting.”

Amid the tightly choreographed sequences, Cameron from time to time used his lightweight camera rig to grab more spontaneous moments as they happened. “For some scenes, Liam didn’t want to tell us in advance what he’d be doing, which is why I wanted to keep things small and compact,” Cameron says. “Any time I needed to move a camera quickly, I could just snap it off the rig, throw a backpack on and go to the next shot.”

To properly illuminate the car interior and blue screen exteriors, Cameron worked with production designer Richard Bridgland, who furnished the soundstage car with seats salvaged from an Ohio scrap yard. Cameron arranged for lights to be embedded atop each window frame. Those lights could then be calibrated with automated dimmers to simulate afternoon, dusk and night. “There were a lot of different types of light coming through the train window that we needed to take advantage of visually,” says Cameron.

To document authentic eastern seaboard light, Cameron went to New York, got on a commuter train and filmed interiors and exteriors as he traveled from Grand Central Station, past underground tunnels in the Bronx and through the bucolic Hudson Valley. “We referenced those plates so, for example, we could re-create the reality of sunlight filtering through the trees outside of New York at four o clock and know exactly what it looks like when the light hits the faces of the passengers on the train.”

The Commuter varies its visual rhythms periodically with aerial shots Cameron filmed from a helicopter as it flew over the buildings of Manhattan and the Hudson Valley countryside. Blending the aerial images with digital elements and soundstage interiors, Cameron always had an ultimate destination in mind for The Commuter. “We just wanted embellish this movie train and make it a dramatic world,” he says. “We took every opportunity to make the train feel dynamic and exciting.”