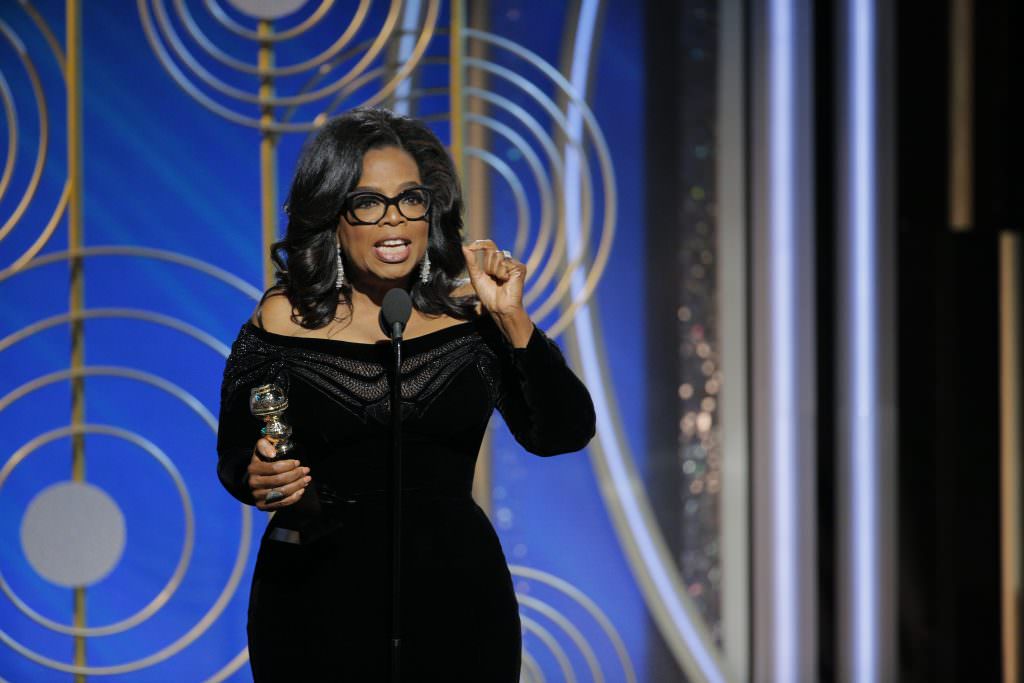 Cecil B. DeMille Honoree Oprah Owns the Night at the Golden Globes

This year #MeToo movement, which led to Time Magazine’s ‘Silence Breakers’, which led to the Golden Globes theme of the night, ‘Time’s Up,’ was given a moment of such overpowering clarity, conviction and brilliance that it will stand the test of time. We are, of course, talking about Oprah Winfrey’s incredible acceptance speech for the Cecil B. DeMille award. We will be talking about it for a long time to come.

When it comes to stars, who has listened more closely and productively to people suffering than Oprah Winfrey? No one, and this was part of what made it so divine to witness her breathtaking, tearjerking speech as last night’s biggest honoree. Host Seth Meyers nailed it when he joked, “Oprah Winfrey is receiving the Cecil B. DeMille Award tonight. What a tremendous honor for Cecil B. DeMille.” As Winfrey accepted the award for outstanding contributions to the world of entertainment, we were all reminded of the outstanding contributions she’s made to empowering the underrepresented, speaking truth to power (and now, truth from power), and finding a way to speak about incredibly difficult topics with grace, clarity and, incredibly, optimism.

As the guest of honor, Oprah had front and center seating, and her presence was felt long before she took the stage. Presenters throughout the night stuttered and gaped at her regal presence, shouting out to her from the stage (Rachel Brosnahan, who won Best Actress in a television comedy series, had a particularly wonderful reaction to seeing Oprah). Presenter Reese Witherspoon gushed over her A Wrinkle in Time costar when presenting Oprah with the award. Witherspoon was at the center of the Time’s Up campaign, inviting costume designer Arianne Phillips to create the pins worn by the Golden Globes attendees. Witherspoon summed up Oprah’s status perfectly: “There are a lot of people known on a first-name basis, but there’s only one person whose name is a verb, an adjective and a feeling, and that is Oprah.”

Oprah’s recognition represented a monumental leap forward in inclusion. She was the first African American woman to receive the award, and although we can hardly think of anyone who could have beat her to the punch, it could not have come soon enough.

No one could have broached more difficult topics in a more uplifting way. In a potent opening, Oprah illustrated the poverty she grew up in and the dreams she had that no one ever thought she could achieve. In 1964, Winfrey recalled the transformation within her when she watched the incomparable Sidney Poitier win the Oscar for Best Actor, opening up possibilities she never even imaged before that moment. She would go on to singlehandedly take a sledgehammer to the barriers placed on a woman, let alone an African American woman, rising to the absolute pinnacle of power in Hollywood and across the media landscape.

Winfrey then highlighted the gut wrenching story of Recy Taylor, a 1944 gang rape victim, who never saw justice but stood up for empowerment all her life. Her comments on the lessons learned and the light ahead drew cheers from the crowd. “Recy Taylor died ten days ago, just shy of her 98th birthday. She lived as we all have lived, too many years in a culture broken by brutally powerful men. For too long, women have not been heard or believed if they dare speak the truth to the power of those men. But their time is up. Their time is up.”

If you haven’t watched the speech, you will want to. Have tissues nearby.

Winfrey’s A Wrinkle in Time director, Ava DuVernay, noted on Twitter the social impact that Oprah’s Golden Globes recognition represents as Hollywood continues to use their platform for social change.

Last time I was at the Golden Globes, it was as a Best Director nominee for SELMA and it was all about #OscarSoWhite. Tonight, it’s to celebrate @oprah and it’s all about #TimesUp. Let’s keep these conversations going. Here’s as good a place as any. ?? pic.twitter.com/XtDe5iYEEX

The Golden Globes were a celebration of some fabulous films and television shows, and stunning performances, but this Golden Globes will be remembered primarily for Oprah’s stunning speech and the overwhelming sense of change that is sweeping the industry. We should remember to revisit Oprah’s words to remind us of what’s worth fighting for, and those brave women who have been fighting for it all along.