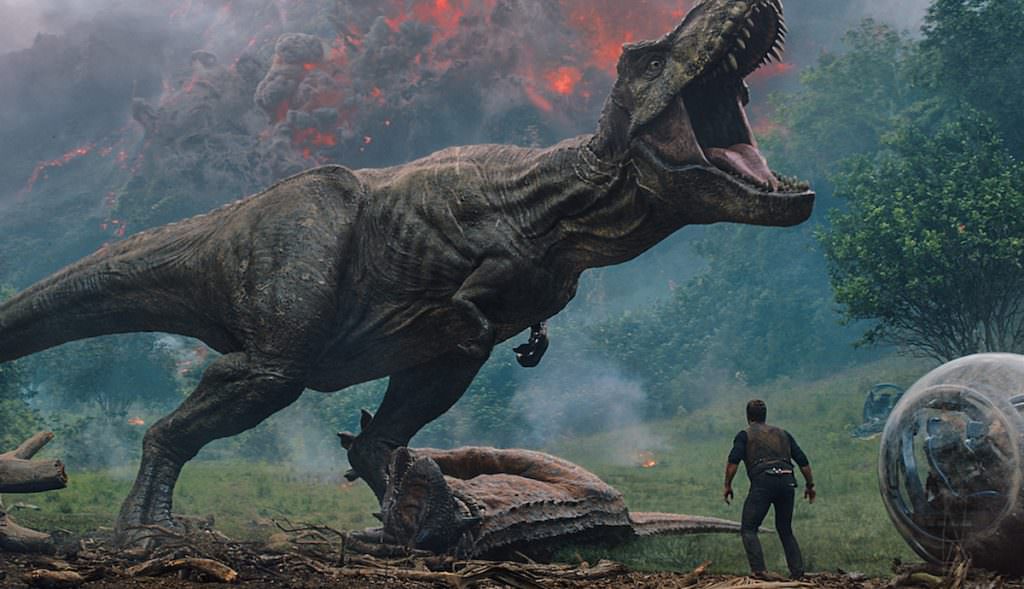 After a week of promising teaser trailers and one very cool behind-the-scenes featurette, the new Jurassic World: Fallen Kingdom official trailer is finally upon us, and it’s been worth the wait. Within a few seconds right at the top, the trailer confirms what we all sort of assumed—Owen Grady (Chris Pratt) and Claire Dearing (Bryce Dallas Howard) are no longer dating. Despite being on the path to romance by the end of Jurassic World, the Fallen Kingdom trailer begins with Owen grilling Claire on who she’s dating now. “An accountant? A ventriloquist? You love a dummy.” “Owen,” Claire cuts in, “stop it, this is not why we’re here.” It’s good to see these two back to their bickering.

The reason they are here (here being a bar) is because Claire now runs the Dinosaur Protection Group, and she needs Owen’s help living up to the group’s title. She wants Owen to help the DPG help save the dinosaurs of Isla Nubla before the island explodes (more or less). As Owen understandably quips, “What could go wrong?”

Once Owen accepts Claire’s offer and they’re on the island, they’re reunited with some old friends (Blue, the velociraptor Owen raised from a baby), some new ones (Justice Smith), and the insane predicament of trying to save animals that will gladly kill you from the larger threat of an exploding volcano. The trailer is essentially two scenes splice together; the terror on the island, with Owen, Claire and Justice Smith’s character fleeing both a stampede of terrified dinosaurs and the falling, superheated rock spewing from the volcano, and Ian Malcolm) Jeff Goldbloom, ta da!) explaining to what appears to be a congressional panel about the relative merits of letting the dinosaurs live or die. Goldblum gets in his signature line, “Life finds a way,” while we watch our human heroes and dinosaur friends all go plummeting off the side of a cliff in a suicidal jump to avoid the volcano’s insensate wrath.

Directed by J.A. Bayona (A Monster Calls, The Orphanage) and written by Jurassic World director and screenwriter Colin Trevorrow and Derek Connolly, Fallen Kingdom is the first movie in the franchise to offer up something even more dangerous than a dinosaur or an ambitious human; the earth itself.

“They were here before us, and, if we’re not careful, they’ll be here after us,” Malcolm says of the dinosaurs. Yet from everything we’ve seen from Fallen Kingdom thus far, it’ll be a wonder anything survives this film.

Featured image: A T. Rex saves the day (for the time being) in Jurassic World: Fallen Kingdom. Courtesy Universal Pictures.