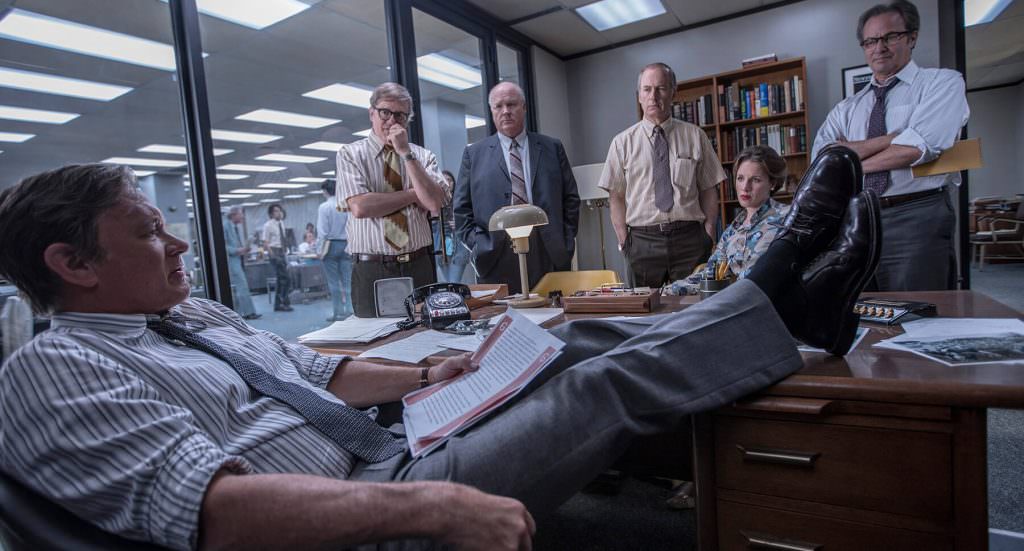 The Post, Steven Spielberg’s latest film opening December 22nd, recounts the Washington Post’s part in bringing the Pentagon Papers to light, on the heels of the New York Times. For the first time, Spielberg is working together with Meryl Streep and Tom Hanks, playing the newspaper’s first woman publisher, Katharine Graham, and its editor, Ben Bradlee. Set in the early 1970s, with much of the action taking place in the paper’s colorless newsroom, production designer Rick Carter and set decorator Rena DeAngelo interviewed many of the real players from this moment in history to create realistic setting for what is both a powerful feminist story and a moment in history with concerning echoes in the present. We talked to DeAngelo about designing for  a particularly culturally relevant film, working with Spielberg for a second time (her first film with the director was Bridge of Spies), and setting the scene for Streep and Hanks.

The Washington Post’s offices seem incredibly realistic, based on everything we think we know about what a newsroom would look like in the early 70s. How did you set up that color palette?

When we set out on this movie, the only reference we had was All the President’s Men and everything was really colorful. After finding the perfect location to recreate the newsroom we set about trying to find any images of what the offices looked like before they moved into their new building and the Watergate era. There were very few visuals to be found, so lucky for us when Deb and I traveled to DC we met with Evelyn Small, Katherine Graham’s long-time assistant, she had a pile of photos from that time and we got our answer. The newsroom was gray and all business, not the brightly colored bullpen of All the President’s Men. Prior to that period, [the paper] was in a different building. So I assumed they had gotten new furniture when they moved, and I got confirmation of this when I met Sally Quinn, Ben Bradlee’s wife, and from some other people who had worked there. They kept saying how gray everything was. So I just assumed that meant the building they were in since 1956, with gray, heavy desks, since that’s what the furniture was of that period. We decided to keep it monochromatic.

I had spoken with the costume designer, Ann Roth, and she had showed me what Meryl was wearing, what other characters were wearing, and though there were 1970s pops of color, there were also a lot of men in white shirts. So, what better way to let the characters pop out, than by keeping the set monochromatic. And the typewriters, the black telephones, they were just the colors they were. I didn’t want to copy All the President’s Men, and we liked the idea of making it colorless. It was [only] 1971, so it didn’t feel right to have a lot of poppy color in there, yet.

What was your process like, working together with Rick Carter?

This was my first time working with Rick, and he assembled a fantastic team of ladies to tell this story of feminism. You work differently with every designer. Rick kept telling me from the beginning that it was a designer’s movie. We talked about what we thought the set should be. When we all realized that everything was supposed to be gray, he was like fantastic, go with that. Working with Rick, we spent the first weeks researching to death, talking to the families of Katharine and Ben, getting a general sense of what the feel of the places were. Then we took our own license. With a fictional character, you try to figure out who the character is and make their house reflect who they are. In this case, Bradlee was a family man, he comes from that New England sort of Kennedy stock, so his was more of a family home. Whereas Katharine was a socialite, she came from big money, and everything had to be perfect at all time, and her home was more for show, for entertaining. Katherine Graham’s biography proved very helpful in deciding how her home and office should be decorated.

You have a ton of experience with this sort of mid-century aesthetic, given your work on Mad Men, Bridge of Spies and The Help. How did this become your specialty of sorts?

It came about organically. I just kept getting these movies. It started with Mad Men, then Across the Universe and The Producers. I just seem to keep falling within this range! I’m actually ready to move on to a different time period. I don’t even have to do that much research for it anymore—I know what the refrigerators look like, what kind of flooring would be in the kitchen.

This film is so relevant, given the current government pressure on media. How did you feel, working on  movie that has echoes in the current events of today?

I dove into the chance to work on this movie. Rick called me and told me what it was about. At that point it was relevant, but it’s gotten so much more since we started the movie. Steven said, had Hillary been elected, he probably wouldn’t be making this movie. We had so many women working on the film—it was just a thing. It felt good to have so many women working on such a feminist story, watching Katharine come into her own, and realize she had the power to override these men, to take her place as the publisher. It’s really nice to work on something so relevant, and it’s why the conversation about this movie is going to last well into next year and past the Oscars. Steven kind of has his finger on the pulse, he knows what’s going on!

And how was working with Steven Spielberg again?

On this movie we did everything in 16 weeks. They got the scripts in March, we started shooting in April, and we finished in August. On this film I really got to interact with Steven. I’ve never seen anyone come to work more prepared. He believes in every single thing that he’s doing, and he makes decisions where it seems odd and then you watch the movie, and of course genius. I would do it again and again.