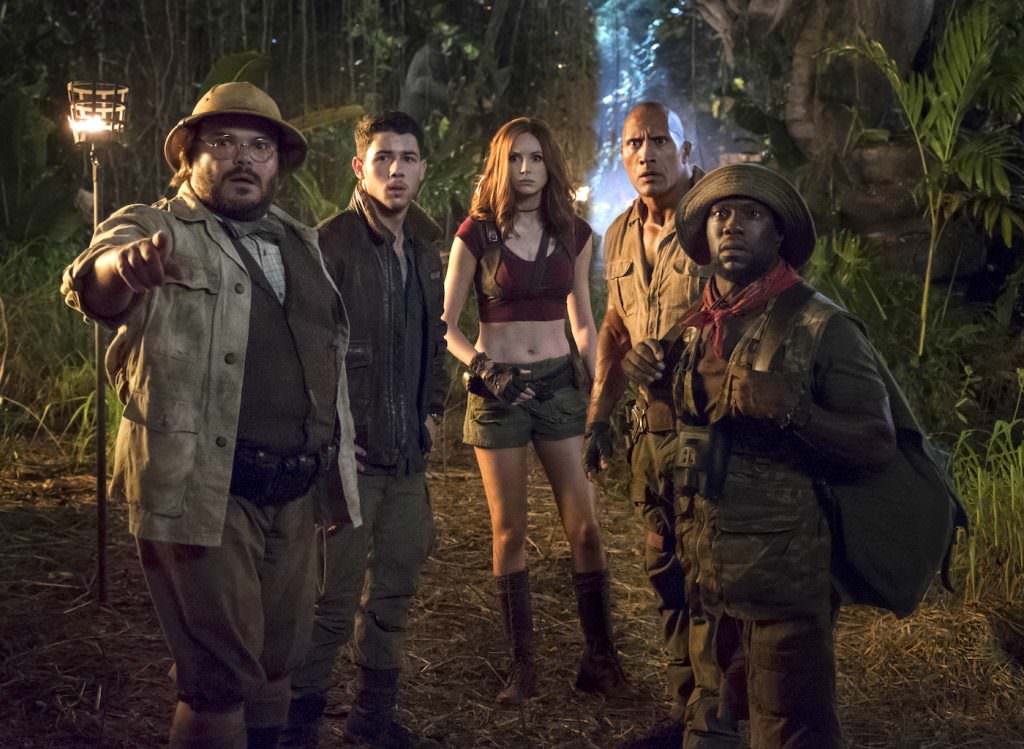 Jumanji: Welcome to the Jungle Scores Big With Critics

We had a good feeling about Jumanji: Welcome to the Jungle. While the teasers and trailers were all appealing, and the cast was clearly fantastic, the main reason we thought the sequel to the 1995 original was going to be really good was we had a chance to speak to stunt performer Jahnel Curfman, who doubled for Karen Gillan (best known as the lethal android Nebula in Guardians of the Galaxy). Gillan’s character is the avatar Ruby Roundhouse, a serious butt-kicker who gives Dwayne Johnson’s Dr. Smolder Bravestone a run for his money. Curfman clearly had a blast working on the film, but she was especially impressed with how hard the cast worked to really sell the stunts, and her enthusiasm for the production gave us a pretty good feeling that Jumanji: Welcome to the Jungle was a sequel that was made with serious ambition. Curfman really liked what she saw on set, especially Karen Gillan’s effort.

“Karen was an absolute dream to work with,” Curfman told us. “She is such a hard worker and really pushed herself physically to make Martha (her character) a complete bad ass. She really held her own with the boys.”

Welcome to the Jungle follows four teenagers who discover an old video game console (much like how the kids in the original found an old board game), and who are literally drawn into the game’s jungle setting, becoming the adult avatars they choose. It’s a clever conceit, and gives the film a larger canvass for the action than the original’s suburban setting did. It’s also a body-swap adventure/comedy with four massively talented actors playing teens trapped in their bodies, investing intellectual and emotional capital in the idea of a timid teenager becoming an adult with the physique of the Rock, but beneath Dwayne Johnson’s bulging muscles, the teenager remains. Ditto for the rest of the avatars, giving the performers an opportunity to do a lot more than run around a jungle having adventures.

Directed by Jake Kasdan, and starring Gillan, Johnson, Kevin Hart and Jack Black, Welcome to the Jungle arrives in theaters today, and critics seem just as enthused as Curfman was. Here’s a brief, spoiler-free roundup of what they’re saying.

Jane Horwitz, the Washington Post: “It is smarter and more humorous than the first movie, and its digital effects – which include stampeding albino rhinos and mountain-scraping aerobatics – are far snazzier, as one would expect.”

Gary Thompson, the Philadelphia Inquirer: Jumanji reboot Welcome to the Jungle a happy surprise – a movie that turns out to be good (almost clean) fun, and is much more interested in character and comedy than special effects.”

Katie Walsh, the Los Angeles Times: “Their cognitive dissonance is what gives Jumanji its humor, and the film relies on the star personas of Johnson, Hart, Black and Gillan to deliver it.”

Lindsey Bahr, Associated Press: “Jumanji: Welcome to the Jungle is a very sweet, and generally entertaining body swap lark with some nice messages about being, and believing in, yourself.”

Rafer Guzman, Newsday: “You may ask: Though good for an initial laugh, how long can this wrong-body comedy shtick pay off? The answer: pretty much the entire movie.

Bill Zwecker, Chicago Sun-Times: “In the end, the filmmakers have given us one of the most fun movie-going experiences I’ve had this year. Huge kudos go to Johnson, Hart and especially Black for providing some truly entertaining performances.”