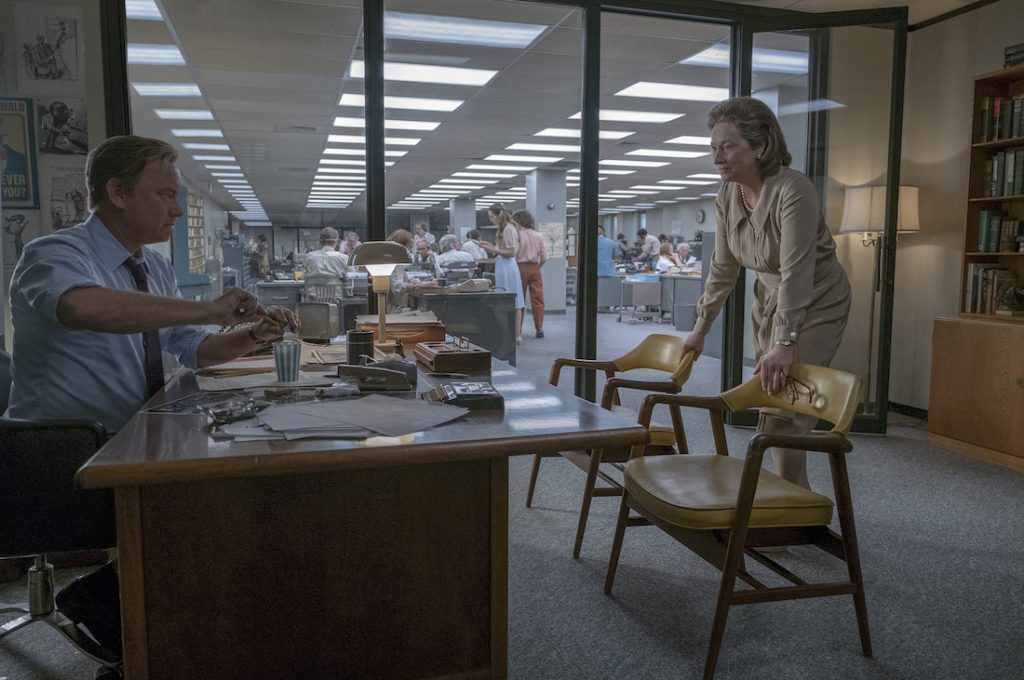 It’s difficult to imagine a more timely film than Steven Spielberg’s The Post. Starring Meryl Streep and Tom Hanks, The Post covers the monumental and hugely controversial publication of the Pentagon Papers back in the 1970s, focusing on the absolute necessity of a free press in any functioning democracy. It goes without saying that The Post comes at a time when our current president attacks the press nearly daily, smearing any story he doesn’t like as “fake news,” and suggesting, as he did just last month, that it might be “appropriate” to challenge NBC’s license (as well as other networks), for publishing stories critical of the administration. The chair of the FCC disagreed, promising the commission will “stand for the First Amendment.”

The Post looks at a cover-up that was much larger than any one president (in fact, it spanned four presidencies.) Tom Hanks stars as The Washington Post’s editor Ben Bradlee, and Meryl Streep as the paper’s publisher, Kay Graham, and looks at their roles, as well as a group of journalists at both the Post and The New York Times who published the Pentagon Papers, exposing the public to the lies that had been sold to prop up the disastrous Vietnam War. The cast is uniformly excellent, including Sarah Paulson, Bob Odenkirk, Zach Woods, Alison Brie, David Cross, Carrie Coon, Bruce Greenwood, Jesse Plemons, Michael Stuhlbarg, Bradley Whitford, and Tracy Letts. The script is by Liz Hannah and Josh Singer (Spotlight), and Spielberg put it together, as he’s capable of, in an incredibly short amount of time. Spielberg became attached to the project last March, and the film is already done and ready for its awards season rollout.

The Post, a thrilling drama about the unlikely partnership between The Washington Post’s Katharine Graham (Streep), the first female publisher of a major American newspaper, and editor Ben Bradlee (Hanks), as they race to catch up with The New York Times to expose a massive cover-up of government secrets that spanned three decades and four U.S. Presidents. The two must overcome their differences as they risk their careers – and their very freedom – to help bring long-buried truths to light.

The Post arrives in theaters on December 22, 2017. There’s never been a more important time to re-learn why there is no America, as we know it, without the fourth estate.