Writer-director Alexander Payne has won two Academy Awards and 17 more Oscar nominations for films that specialize in low key stories about flawed characters. But unlike Nebraska, The Descendants, About Schmidt and Sideways, his new movie Downsizing (opening Dec. 22) goes high concept: Matt Damon stars as a five-inch human who tries to leave his problems behind by living in the pint-sized “Leisure Land” community alongside normal-sized earthlings. Visual effects supervisor James E. Price used three-D printers and 80-year old camera tricks to conjure what he describes as Payne’s “Spectacularly banal” aesthetic. “In his films, Alexander likes to focus on performance, so right away we decided not to rely on digital doubles,” Price says. “We had to figure out a way to shoot actual performances by real life actors and fit them into the scene as five inch figures as realistically as possible.”

Price earlier produced epic-scaled effects for popcorn movies like Pacific Rim and The Lord of the Rings: The Two Towers. Here, there were no explosions, no monsters, no fantastical landscapes. Still, it’s a startling sight when wee Norwegian Jorgen Asbjørnsen (Rolf Lassgard) stands at a tiny podium and tells an auditorium full of normal-sized scientists that he’s figured out an eco-friendly method for shrinking people.

To bring the scene to life, Price resurrected old school “Forced Perspective” techniques used in 1935’s Bride of Frankenstein and the 1959 Disney movie Darby O’Gill and the Little People. “We defined our scale for the small people characters as being one fourteenth normal size, so an actor who’s five foot ten shrinks down to five inches high,” Price explains. To create the illusion that miniscule characters share the same space with full-scale adults, filmmakers filmed each sequence twice. “For the Jorgen scene, we shot the auditorium normally and got shots of the actors interacting with Jorgen, using a five-inch 3D-printed doll as a stand in for composition, framing and eye lines. Then we very carefully measured the distance from the camera before we could shoot the green screen element,” Price says. “If the camera was ten feet from the full sized podium, we pulled the camera back 140 feet. By scaling up the camera distance fourteen times, Dr. Bjornson then appears fourteen times smaller to the camera. That way, when we composited him into the scene, he really looked like a small person.” 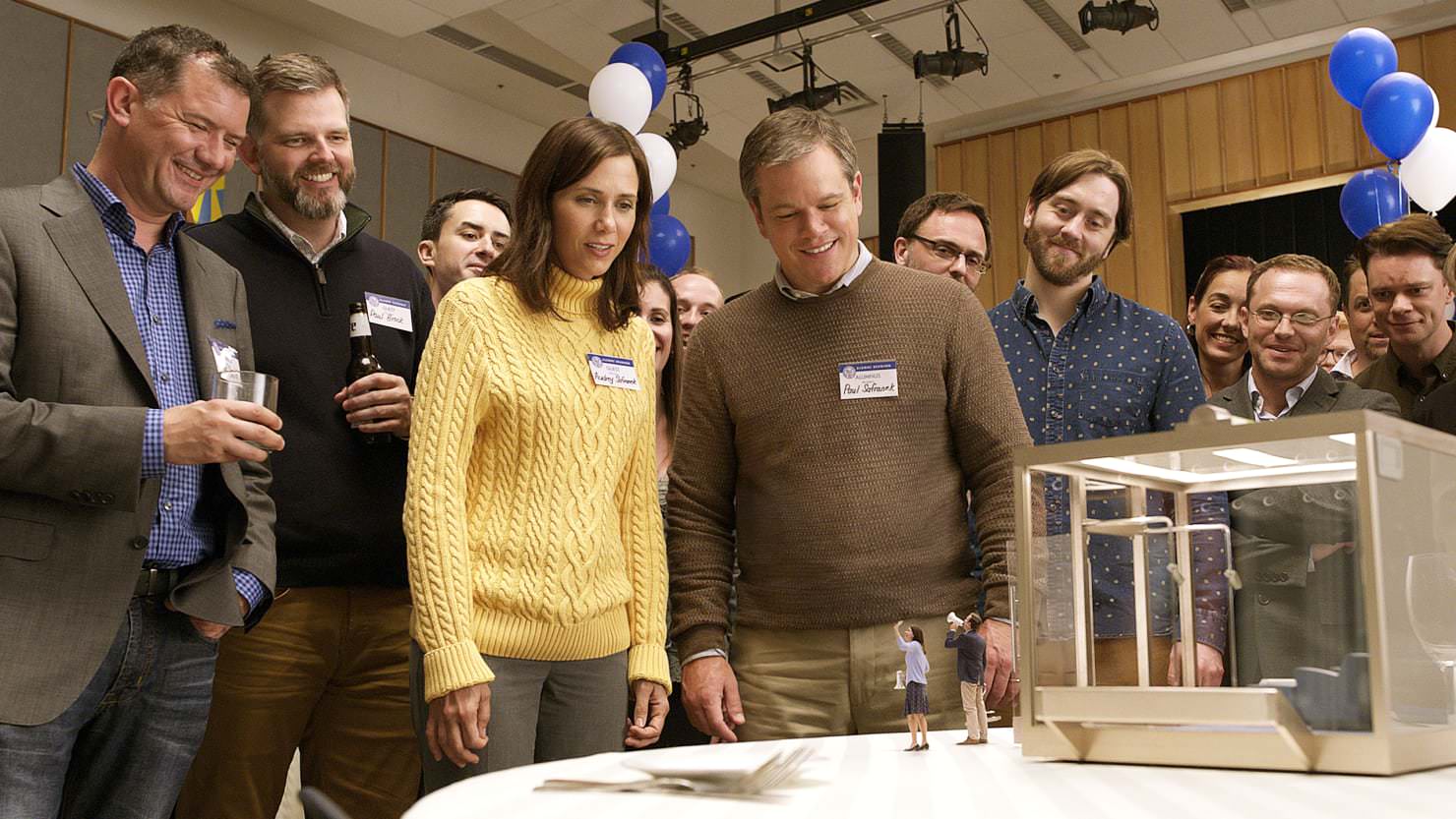 In the world of Downsizing, clusters of Lilliputian citizens go from place in busses outfitted with a “travel box” not much bigger than a carton of donuts. To mimic the jostle of an actual bus ride, filmmakers built a jumbo travel box 12 feet in the air and situated it on top of a motion base capable of being jiggled up and down from six separate angles. Price says, “Actors arrived at the soundstage, climbed up a ladder into the “Travel Box” and took a seat. Then we moved them around with this motion base that had different settings like ‘100 percent Shake’ or ’80 Percent Shake,’ which we could dial up or down, depending on the shot.”

Price and his team precisely synched travel box movements to the live-action bus shots previously filmed by Payne. “After Alexander made an edit of the scene, we took those backgrounds, tracked the camera in the computer and sent that data to the motion base set of the travel box, so everything matched perfectly. You don’t necessarily notice it consciously but by getting the travel box movement just right, I think it really helps the audience accept the little people as being real.”

Miniaturization sight gags periodically inject jolts of novelty, as when pint-sized Damon uses a pen taller than he is to sign gigantic divorce papers so he can make his signature visible to the naked eye of normal-sized lawyers. But for the most part, Price designed Downsizing effects to underscore larger themes. “This movie defies genres,” Price says. “It’s not science fiction per se, its not a comedy or love story per se, it’s not a family movie per se, but Downsizing has elements of all those things. It was exciting to do this fresh take on fairly traditional visual effects in a way that doesn’t distract from the story.  Deals with issues like over population, the environment, commercialism, materialism, this movie has a lot to say.”