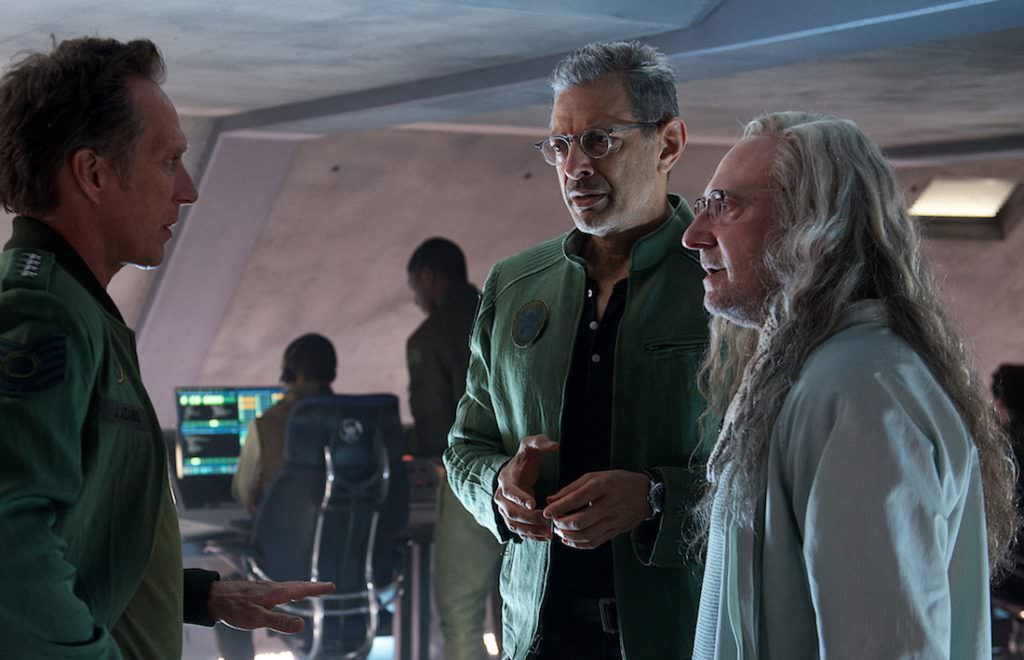 Twenty years after the humans united to fight the invading aliens, with the help of computer virus uploaded by a nerdy genius David Levinson, played by Jeff Goldblum, the aliens have returned, and Jeff Goldblum has, too, in Independence Day; Resurgence.  In an interview, Goldblum talked about returning to the role of David Levinson two decades after the first film. But any conversation with Goldblum is guaranteed to be wide-ranging and he asks at least as many questions as he answers, always vitally engaged and curious.

What was different this time?

Not too much!  Little details here and there, but acting in the same role. [Director Roland] Emmerich was more masterful and technologically they had more budget on this one, although the first one was a big movie. We were on big sound stages in Albuquerque, and they built enormous sets.

Were you filming on green screens pretending a tennis ball was an alien?

There was a bunch of CGI. So yes, there are tennis balls and blue screen and “Strike the camera,” and “Here’s what you’re looking at, here’s where you’re both looking and here’s what’s passing you, so make it up.” But they had technologically created some visualization aids to let you go here. “Here’s what you’re looking at when you look out there,” so they can show you kind of a mock up. But I still haven’t seen the finished movie. I don’t know how many shots of special effects there are, but there are lots, and they are extravagant. I think four different companies all around the world are the shoemaker’s elves working on them, so they are just hot off the press for its release.

You have a great line in the trailer about how the aliens seem to always want to blow up the landmarks.

You liked that? I made that up. I don’t want to toot my own horn here. It was me and the wonderful Liam Hemsworth. He’s a very sweet guy, wonderful actor. We’re just looking at blue screen and somebody is just talking us through it and while we’re doing it, and you’re looking out and as you know the gravity from the huge ship is pulling all the cities off of their foundations and, as it’s passing by, dropping the cities on other cities. So it’s a horrible scene of carnage and destruction that only Roland Emmerich can do in that spectacular way. But we’re just imaging all this horrible stuff and he says, “Yeah, as you’re passing these things, just keep talking, you know, say anything you want to say.” It’s in the trailer but I don’t know if it will make the movie or not.

You tend to play very intelligent and knowledgeable characters. Are you a techie?

I’m not really, no. I’m not a techie. My dad was a doctor and playing these characters got me a little interested in science. I saw Neil deGrasse Tyson’s recent Cosmos series. Love him.  I’ve read a bunch of Richard Dawkins, Sam Harris, and Daniel Downey, who I just met on a boat trip. Yeah, I’m very interested in that kind of stuff but myself, no, I play one on the movie. I don’t know much about anything.

What has David Levinson been up to?

At the beginning of the last movie, his father thought he was underemployed, working for a cable company. His dad would have said an under achieving cable technician. But they thrust me into extraordinary circumstances in that first one. My job now is I’m the director of the space defense agency. That means I protect the planet along with international allies because, in a lovely way, just like the John Lennon song "Imagine," we’ve all come together

We’ve collaborated and put down all our arms against each other and realize that we’re in the same boat. One tiny family on a tiny fragile beautiful and precious planet, and the thought of losing it we can’t abide. And so I’ve taken some of the alien technology and used it with our own to solve some problems like climate change and environmental things and energy things, and we’ve rebuilt because we’ve lost like 3 billion people. It was the biggest war that the human species have ever engaged in and very transformational. I was an environmental activist in the first one. So I was thrilled to do that, because I don’t think military things were exactly in my sweet spot. It was a challenge to try to assess and analyze who they were, what they were up to, where they were from, and if they are coming back, and what possible threats we may face and to prepare ourselves accordingly. So we have a military base on the Moon and one on a moon of Saturn.

We’ve got orbiting satellites with big defensive capabilities and defensive plans and all that. But we are kind of in the dark. I’m conscientious, but it’s challenged every bit of my resourcefulness in these 20 years. I’ve been taking it very seriously, seeing less of my dad, seeing less of New York. I’m all over.  When we first meet me in this film I’m in Africa, looking for something, working on something and then it all goes down to July 2nd, 3rd, and 4th. Once again 20 years later and some questions are answered, at least somewhat, in this movie. Who they were, what they were up to, why they would come back, etc, etc.

Who else was out there?

There are some interesting answers to some of those questions that are species transforming. My character is, of course, wildly inflamed with curiosity and burdened with the responsibility with this new crisis.

If you could have in real life any of the technology in the movie, what would you pick?

Well, more than technology I would dream of having a human family that was united and not ignorant about fussing over territory or cliquish fantasies of one kind or another, and united about what we know about who we are, with all of us on the same page and in the same boat.