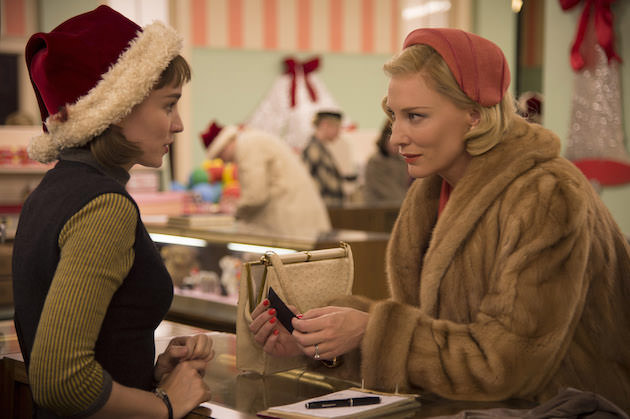 Carol, a beautiful adaption of Patricia Highsmith’s novel The Price of Salt, about the evolution and dissolution of a relationship between two women in New York in the early 1950’s, opens today. Cate Blanchett stars as the title character, a lovely housewife in a convenient marriage (Kyle Chandler is Blanchett’s cuckolded husband) who embarks on a relationship with a younger store clerk, Therese (Rooney Mara). The film was directed by Todd Haynes and shot on a tight budget, a fact which is apparent in neither its cast nor its precisely executed aesthetic. To that end, we chatted with costume designer Sandy Powell and production designer Judy Becker about how they managed to recreate the look and feel of the 1950’s for a song, from scouting New York City lookalikes in Cincinnati to using Blanchett’s own expertise on costuming.

The Credits:  The 50s are a pretty well-documented period, fashion-wise. What did you use for specific inspiration?

Sandy Powell:  I started with researching images from the period, a mix of street photography and photos of real people in real situations, like a person in a shop, for instance — the kind of world that Therese would have come from. Then Carol’s looks came more from fashion photographs. I looked at the back issues of Vogue from the exact months in which the film takes place. 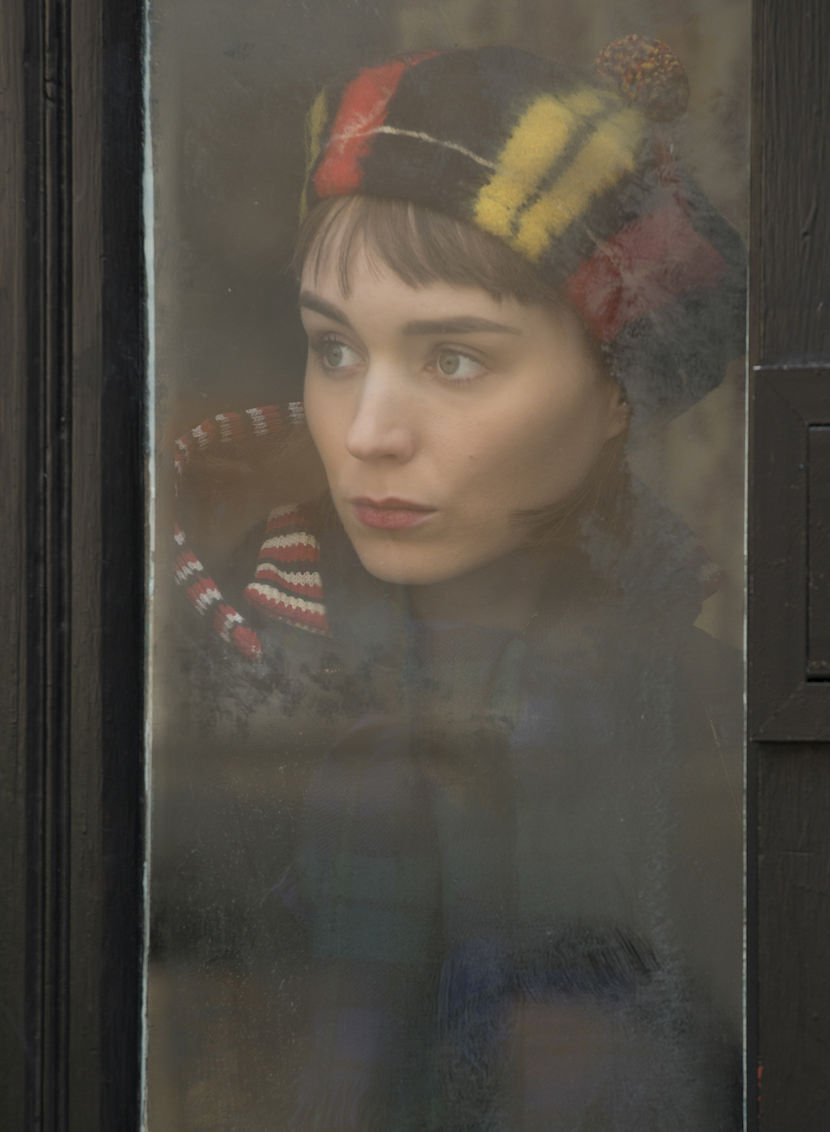 Following that, how did you source and create the resulting impeccable wardrobe?

SP:  We rented vintage pieces from companies, of course, and tried different things to see what worked.  A lot of Carol’s customs were made for the film, though — her coat, suits.  Therese’s wardrobe did include more vintage, but the rest of it was original.

Did you work with any other designers for the shoot?

The only other designer I worked with was Ferragamo.  They created new shoes for the film, but they were based on the company’s original designs.

How would you compare the work on Carol with prior films — particularly since you’ve worked with Cate Blanchett several times?

SP:  Well, in terms of positive, it certainly helps to work with the same people.  This was the third time I worked with Cate, and it really helps to know with an actor what works and what doesn’t.  And then this was my first film with Todd [Haynes].  The more you do with someone, the more you get a shorthand as to what is going on in somebody’s head.  Todd is such a great director, so that’s the best experience one could have.

In terms of difficulties, there aren’t difficulties creating a period. But this was an incredibly low budget film. We had to be really creative and resourceful with limited resources and time — we had very little time to get it together.  But it pushes you to be extra creative.  It would have been nice to have a little bit more though.  And the problem with the film looking so expensive on such a low budget is that the next producer thinks you can work miracles! 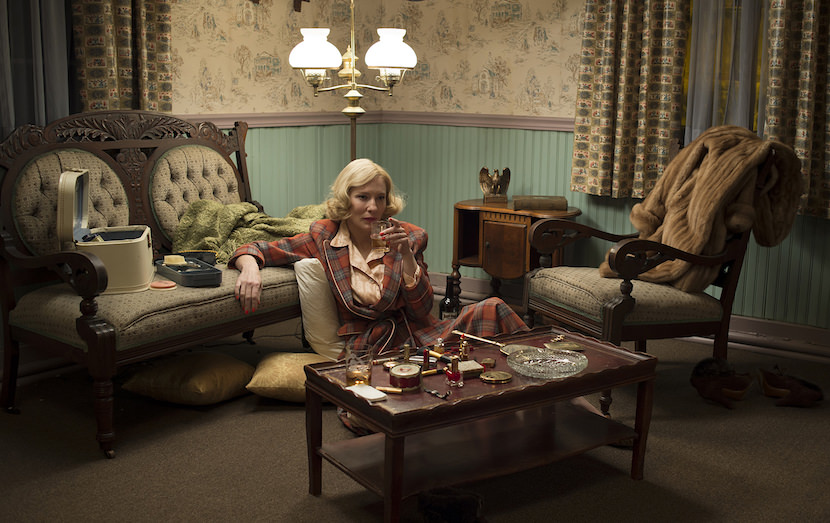 Cate Blanchett on the set of CAROL. © 2015 The Weinstein Company

Can you tell us a bit more about working with Cate Blanchett?

SP:  The first time I worked with her was when she played Katherine Hepburn in The Aviator, which was of course a dream character.  The second time was with Cinderella [Ed.: in which Blanchett played an impeccably turned out evil stepmother] and we were already talking about Carol.  She understands clothes and knows how to wear them and can put something on and make it work, but she can also tell you straight off if something isn’t working. Not all actors can do that.

In a way, Cinderella was timeless, but Carol was all about its time period. And yet the clothing has similarities…

SP:  Cinderella was timeless, but it was also 19th century, and with Blanchett’s character, I looked at the 1940s. [Those looks] really helped me jump forward with Carol, so some of the reference images are the same. It was such a great shape, I was quite excited to keep going with it.

The Credits: Where was the film primarily shot?

Judy Powell:  We shot the entire film in and around Cincinnati, and also a little bit in Kentucky. We started by scouting in New York, which is where I live, and where the DP (Edward Lachman) lives, and Todd was there. We went and looked at some of the original places that we’d need to replicate, the ones that would be more difficult. We looked at the New York Times building, because we knew there’d be a crucial scene there. We also knew we couldn’t replicate Times Square, but needed to find something believable. And we needed to look at Bloomingdales, because there are things that have changed a lot around there, but also many that haven’t. Then we looked at a house in New Jersey. Carol was based on a real life woman, whom Pat [Highsmith, the novelist] had met and maybe been infatuated with. We looked at her house in New Jersey, and the train station, where she would have been dropped off by Carol. 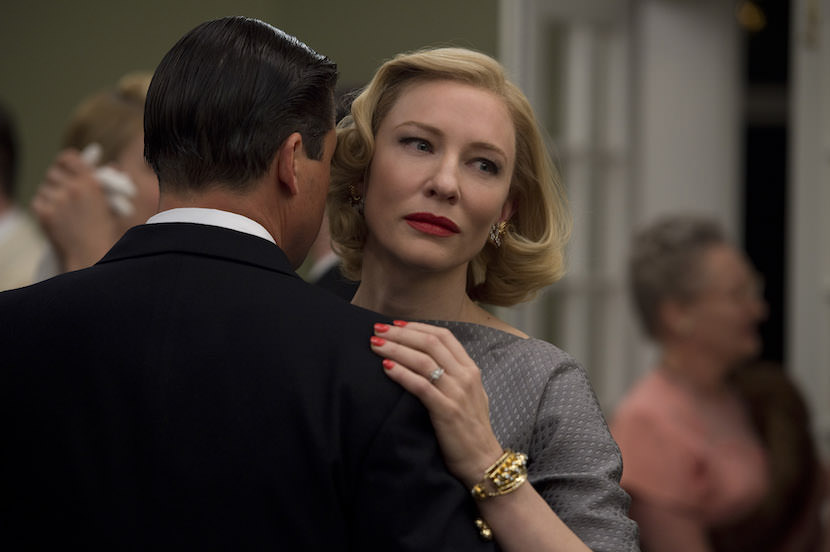 That was the first round. When we went to Cincinnati in the fall of 2013, we did a grid of the entire city — Todd loves to go scouting, which is great — and made a check list all together.  In terms of the locations, we did a lot of scouting. It was bitter cold. We looked at so many motels, and I should note, that all of the major locations, and many minor ones, were dramatically transformed.  But we were looking for a lot of old and untouched locations, since we didn’t want them as is. The toy department [where Therese works] was a huge location that had to be figured out, and it was a combination of build and location. We were looking for a basic structure that could become the toy department, essentially. We scouted a few shut-down department stores outside Cincinnati. One was too 1960s, another was good but the area we could shoot in was too small, and another wouldn’t even let us in.  Finally we looked at an old arts high school from the turn of the century, and it had a great gymnasium. We were thinking of turning the gym into the toy department, and it had this great mezzanine like old department stores used to have, but the building had no heat and no water, and then suddenly they couldn’t make a contract.  My set decorator, Heather Loeffler, who I’ve worked with for 15 years, said she’d been shopping at a fabric store with empty floors. It was exactly what we needed.  They had everything, mullioned windows, and they were so into it.  We immediately built a model and worked out what our toy department would look like. along with the details. 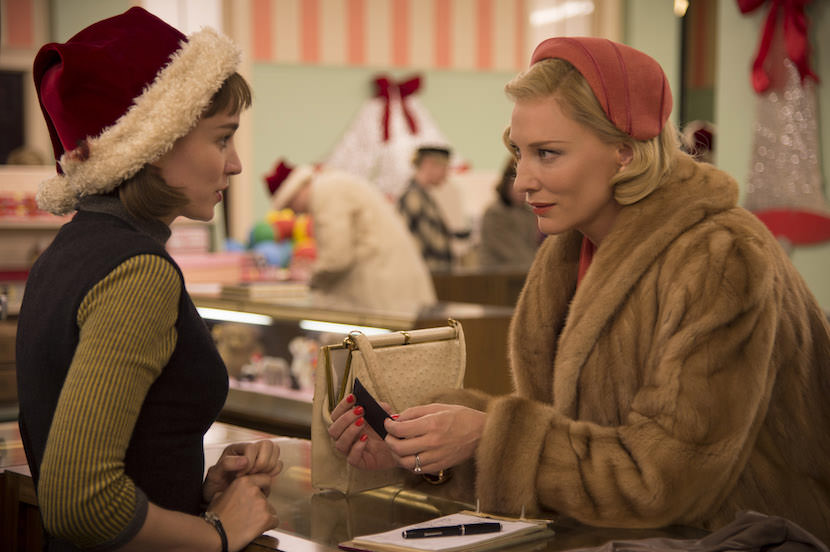 How did you replicate smaller details, like cars, or the items around the store where Therese works?

JB:  Heather had started collecting an assortment of dolls from the beginning.  Some are newer ones that passed for period, and some we revived to look mint.  There are toy boxes you don’t see much of, but we designed and fabricated those. There was a great box manufacturer in Cincinnati. And for the train set, Dan Fisher, our prop master, found a local train enthusiast.  We designed it and he made it for us, with a lot of notes. 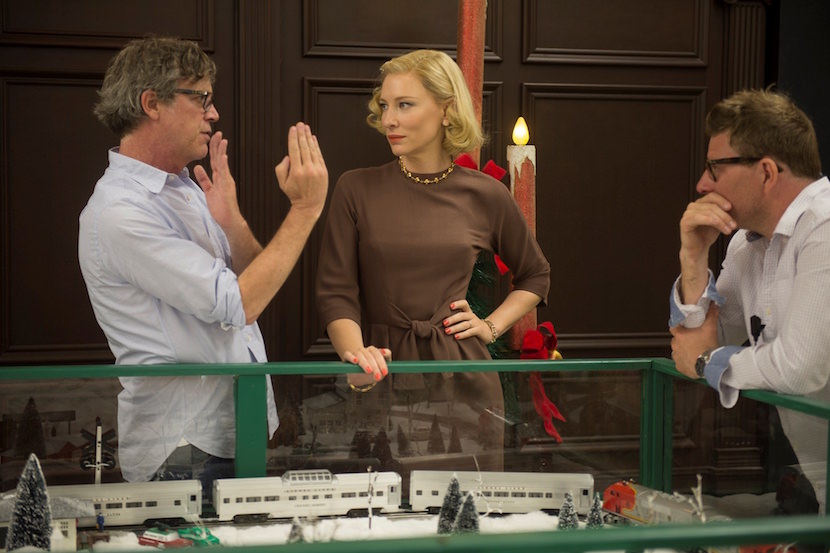 There are a couple of pivotal restaurant scenes. How did you recreate the settings for those?

JB:  For the one in the beginning, that was supposed to be the former Ritz Towers, where they had a lobby bar.  We researched that a lot. [In the film] it was actually the entrance of a private club in Cincinnati.  We built the bar that you see in the beginning, and some other elements there, to make it feel more like a lobby bar restaurant. The restaurant with the red booths was a real restaurant, a great little fun place in Cincinnati.  We created this amazing mural that you don’t really see, but that was one of the few locations that didn’t need a lot of work because it was so dead on. Something really important for me is that if its not broke, don’t fix it. Sometimes you luck out and find something really good!  It’s very much a design choice to say no, this is good the way it is, we only need to change a few things. That was an important lesson to learn from a [past] mentor, because every decision you make is a decision about the design of the movie. 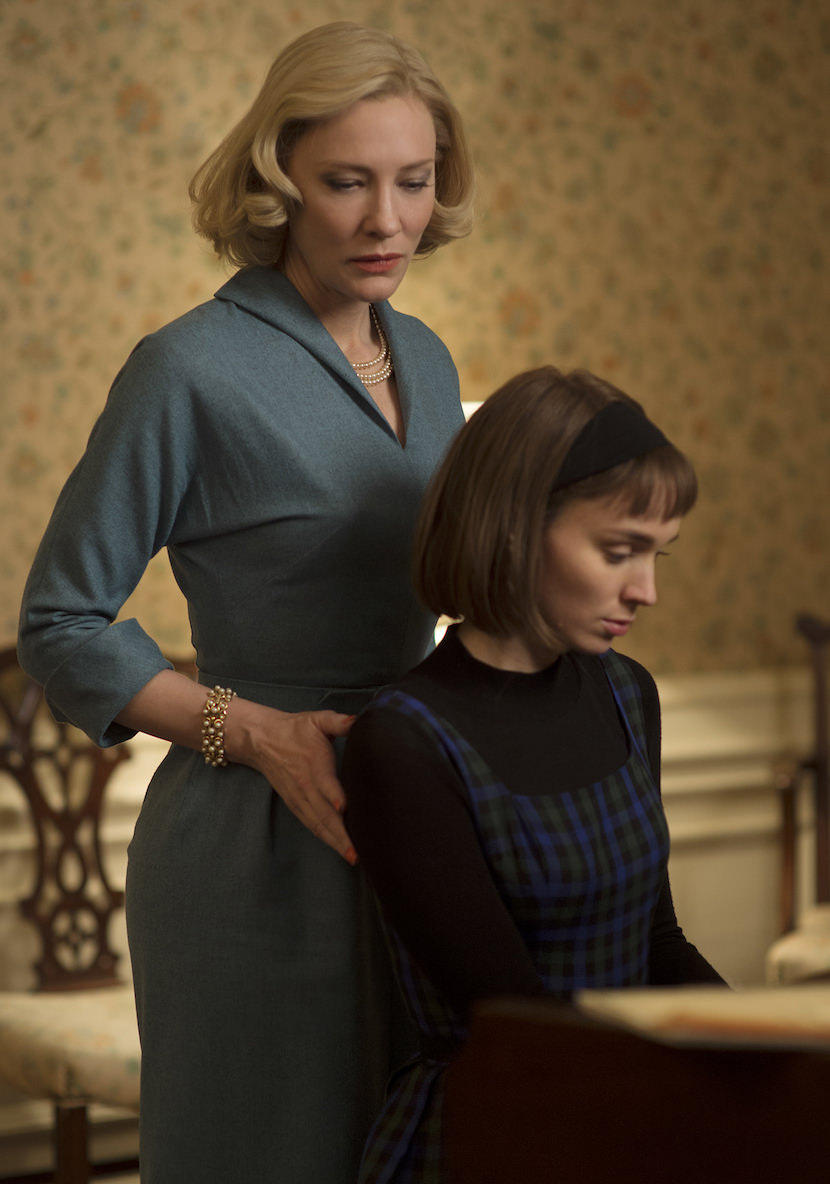 The film is notable for its super-specific 50’s colors. Did you have to repaint anything to realize the color scheme?

JB:  I always do that. I have a big collection of vintage paint chips and decks that I always use on period and even contemporary films. I brought this collection to Cincinnati and worked with Todd, and did a lot of paint samples. I always do a lot of paint samples. At the beginning we were leaning toward off greens and pinks and mauves, because they were accurate for the late 40s and early 50s. We also wanted these emotionally unsettling colors. They’re not complacent colors. That was one of the reasons for picking the yellow-greens and the dirtier ones, where you don’t even know what color they are, which is why they’re disturbing.  I always have my team mix custom color. My charge scenic, Pat Sprott, came with me, and she’s amazing at that.

Adding Carol to movies like American Hustle, Silver Linings Playbook and Brokeback Mountain, we’d say you’re an expert at evoking specific times and places in American history. Was there anything particularly new or challenging about setting the stage for this particular era?

JB:  There was a more overriding aesthetic to Carol. Well, there always is, but a lot of times its generated from the characters themselves, and this was generated from the story and time period. We were really trying to evoke a certain socio-economic time in history, and in the history of New York City. That was really important, along with creating the individual worlds for the character. Whereas on other movies, there’s an overriding aesthetic, and it stems from one main family, outwards — for instance, with the family home in Silver Linings. But Carol was a different aesthetic [set more by the world outside the characters].