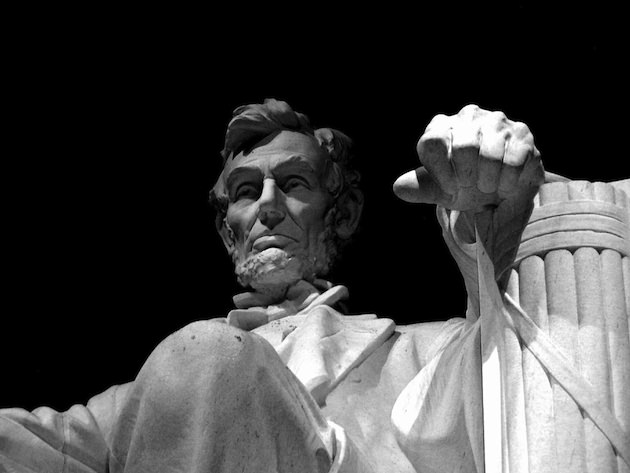 Abraham Lincoln in Film, on the 150th Anniversary of his Assassination

Today, April 14th, marks the 150th anniversary of the assassination of President Abraham Lincoln while attending a performance of ‘The American Cousin’ at Ford’s Theater in Washington, DC. The 16th President passed the following day, leaving a shocked, grieving nation to heal the wounds of the Civil War without its leader.

Lincoln’s epic story has been manna for filmmakers from the inception of the medium. From D.W. Griffith’s Birth of a Nation (1915) to Steven Spielberg’s Lincoln (2012) to the television movie Killing Lincoln starring Tom Hanks in 2013, this president’s story IS the story of America. It is a rags to riches tale of growing up dirt poor and through ambition, ingenuity and sense of purpose, became the president who saved our nation. There has been no shortage of great actors who have been granted the privilege of playing Lincoln, and seemingly no shortage of films about him.

On the anniversary of this American tragedy, here are four movies based on the life of President Abraham Lincoln.

John Ford's fine direction distinguishes this highly fictionalized account of the early life of Abraham Lincoln. The film shows Lincoln (Henry Fonda) as he rises from a country boy born in a log cabin to a lawyer in Springfield, Illinois defending two young men unjustly accused of murder. The film, produced by Darryl F. Zanuck, received an Academy Award nomination for "Best Original Screenplay" for its screenwriter Lamar Trotti. Henry Fonda, perhaps the most American of actors, is at his best playing Lincoln as the quintessential, compassionate American hero.

Robert Redford focuses on the chaotic moment in history directly following President Lincoln's assassination to tell the story of the proud mother charged with committing the monumental crime, and the ambitious young lawyer who reluctantly becomes her defense attorney. The Civil War has ended, and upon returning home, Union War hero Frederick Aiken (James McAvoy) endeavors to enter the world of politics by establishing himself as a lawyer. Though a high-society ball provides Aiken with the unique opportunity to gain an audience with standing Secretary of War Edwin Stanton (Kevin Kline), history intervenes when John Wilkes Booth fires the fateful bullet that ends the president's life. The nation is soon engulfed in turmoil as a massive manhunt for Booth's collaborators commences, leading lawmen to Confederate sympathizer Mary Surratt (Robin Wright), whose son John has become a prime suspect, yet remains dubiously out of reach. Meanwhile, as the American public cries out for justice, former attorney general Reverdy Johnson (Tom Wilkinson) persuades Aiken to act as Mrs. Surratt's defense lawyer, and the mounting pressure both in and out of the courtroom begins to weigh on the conflicted barrister's conscience as the pressure turns up on John to give himself up, and save his mother from paying for his crime in the gallows. Kevin Kline, Alexis Bledel, Evan Rachel Wood, and Justin Long co-star.

Steven Spielberg helms his long-in-the-making biopic of Abraham Lincoln for DreamWorks and Touchstone Pictures. Daniel Day-Lewis portrays the former head of state with his usual fearlessness, in the Tony Kushner-penned adaptation of Doris Kearns Goodwin's book “Team of Rivals.” Lincoln chronicles the President's time in office between 1861 and 1865 as he dealt with personal demons and politics during the Civil War. Sally Field plays Lincoln’s wife Mary Todd, part of an incredible ensemble cast that includes Tommy Lee Jones, Joseph Gordon-Levitt, and Academy Award nominee John Hawkes.

No list of films about President Lincoln would be complete without this fictional take on history. As a young boy, Abraham Lincoln watched his mother Nancy (Robin McLeavy) suffer an agonizing death following a midnight encounter with malevolent bloodsucker Jack Barts (Martin Csokas). Nine years later, a vengeful Lincoln (played as an adult by Benjamin Walker) attempts to vanquish Barts in his first terrifying encounter with the creatures of the night. Fortunately for the future of the nation, the would-be assassin is saved by determined vampire hunter Henry Sturgess (Dominic Cooper) at the last possible moment, and he lives on to perfect his vampire-slaying skills under his rescuer. Flash forward to 1837, as Lincoln arrives in Springfield, IL, and quickly lands a job as a shopkeeper under Joshua Speed (Jimmi Simpson), while also dividing his personal time between studying law and slaughtering vampires. Shortly after falling under the spell of beautiful Mary Todd (Mary Elizabeth Winstead), Lincoln has a belated reunion with his childhood friend Will Johnson (Anthony Mackie), who reinvigorates his passion to fight for freedom. But a war is coming, and immortal plantation owner Adam (Rufus Sewell) is determined to use it as a means of gaining the upper hand against mankind. Years later, as the 16th president of the United States, Lincoln is joined by his old friends in a last-ditch effort to save not just the Union, but the very future of humanity.