As director Dean Israelite spun Matthew Lloyd a tale about kids creating a time machine, showing him detailed storyboard panels with picture of teens with a secret tools that looks liked a dark graphic novel, Lloyd made a decision. He would be the cinematographer for the Paramount feature Project Almanac.

The next challenge was figure out how to make the film’s found footage style work. The duo decided to split the difference, combining the jittery style of found footage with traditionally shot footage to “engage the viewers in the reality,” Lloyd explained.

Found footage can feel more real than the flawless, polished shots we're typically used to. “Audiences are becoming so sophisticated in their ability to recognize visual elements, that you’re not really fooling anyone anymore with the standard tricks in the movie business,” Lloyd said. “By framing it in a way that makes it automatically something you haven’t seen before, it has much more of an impact.”

But shooting a film as if it were just kids holding a movie camera has its own limitations: the filmmakers had to figure out how to choreographic long handheld shots, while still “hitting X number of story elements and narrative beats,” Lloyd said. That meant lots of advance planning.

When Lloyd, whose credits include Robot and Frank and episodes of the TV series Fargo, works as a cinematographer, he finds the director for “what I call ‘lock-away’ sessions. I go into the room, close the door, and read the script to them. I try to distill what they’re after in each sequence. By reading the script, it helps them get out of their head a bit and get into reality.”

Lloyd talked to The Credits about shooting Project Almanac.

Did you try to create a different visual look for different periods in time?

We went through a bunch of permutations for the visual effects, maybe this could be looser or messier, maybe there should be more “glitching,” we developed a language to describe the elements that are in play for a given shot or sequences, to give notes back to the 3D artists, and do versions. At the end, we ran into the reality of what the lead character should look like when he jumps back in time for the last time.

We were looking at all these different contrasts and color treatments, but we weren’t finding something that hit home. Those things are very ideological – “it should look like a hand-written letter to friend,” or the look should be “the essence of being deconstructed.” That doesn’t really mean anything, so you have talented people that figure out how to bring that look into being. One day, one of the colorists doing digital intermediate threw a super high contrast look on it, and that was it. The idea is that the medium they’ve used to capture this whole story is breaking down, and glitching, and you have an almost smearing quality that shows the impending breakdown.

What about the look of the kids, given it’s supposed to have that found footage look?

The goal for the beginning was a slightly heightened reality of the American high school tradition. We had a lot of conversations early on about how people look. It became obvious that you needed the kids to look good and for the characters to come off in a certain way to believe their attractions to each other and the school reality. The look of the kids needed to be strong and defined. We did a lot of tests with costumes and [producer] Michael Bay. They’re very into that process, and how lighting interacts with things and the look of the kids, and Michael weighed in on where to go with certain characters and looks. 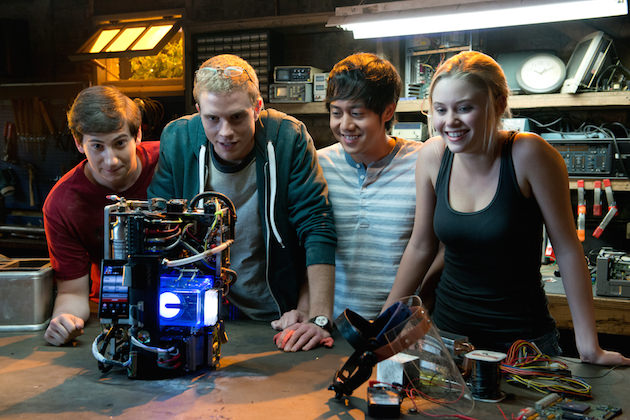 How do you edit a movie with the long takes you get in found footage? Do you shoot coverage to make sure they’re aren’t gaps?

It’s the opposite of what happens in a regular movie. In a regular movie, occasionally you can have sparse coverage in a dialogue scene, and then when you get into the action you need a million shots to make it work. For us it was the opposite. What we needed for the kids and their characters to develop, for those dramatic beats, was a lot of options. We took a bit more license there, we decided that once we were inside a scene, you can assume these little bits of dialogue are independent pieces within the idea of the scene being continuous, so we can cut or pan to different characters talking in a scene. And the action, weirdly enough, because we had planned it and story boarded it so meticulously, worked well without a lot of coverage.

Was there an area of your craft that you really got to hone in this film?

I’ve always been interested in lighting as an element of architecture. What you end up with so often, especially in movies with young stars, is that you create this heavy-duty lighting presence on the set, and it disjoints the actors’ relationship to the director and to the set design. I like to find ways so the lighting doesn’t interfere with acting and set design. A lot of it was about rigging and implementing practical lighting that can be hidden in nooks and corners, and trusting the actors to find the place that works best for the scene. Every shot doesn’t look like it’s from Vanity Fair, and the actors have the liberty to be lit or not fully lit – you tell them this is where they look best, and they can guide their performance with light in an interesting way. The nice thing about having talented people around, the gaffer and key grip and production designer, is that if you say you want this work, they can find a way to do it. 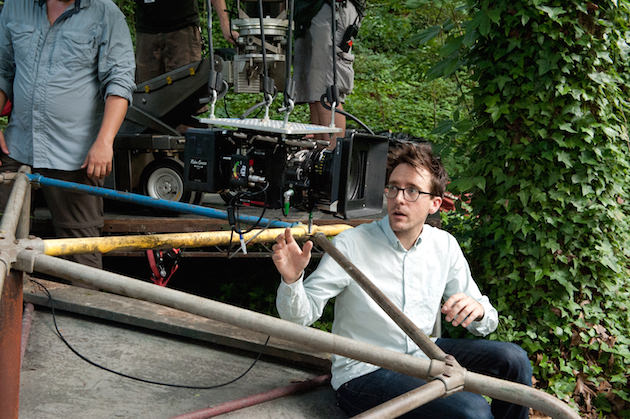 What kind of camera or cameras did you use?

We went through a lot of tests — everything from real handicams to GoPros to iPhones to incredibly small, specialty cameras. At the end of the day, it felt like we were trying too hard. So we ended up with RED EPIC, with 4k resolution, for a higher-end theatrical delivery. They rebuilt at the camera house in a lightweight config, so the operator really just had a lens and mount in their hands, and then everything went via a fiber optic cable to a backpack. The operator could really just hold it in the palm of their hand. 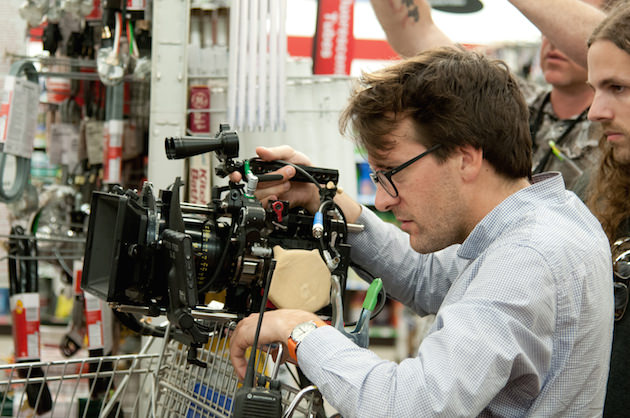 What scene was most memorable for you as a cinematographer?

The scene that gets talked about the most is the first time they successfully fire up the machine. There’s an 11-minute sequence that really only plays as one shot. It’s one scene but multiple sequences put together. Dean and I were incredibly specific about how we would shoot and hide the cuts. They’re running up and down to the basement to siphon off a car battery to fire up the machine, and the camera gets set down, and when it fires up you see there’s water dripping down in reverse.

Dean cuts to a surveillance angle of the entire block. The Georgia electric company in Atlanta let us cut into the grid and turn off the power for the entire block, so all the streetlights go out in sequence. It’s a neat end to what was a triumphant effort in my mind. You never know if it’s going to work with these things, but it’s probably the strongest visual effects sequence that I’ve ever endeavored to compete.