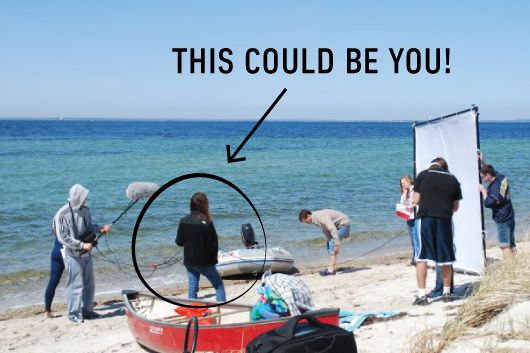 On Set: The Crucial Role of the Production Assistant

When I was in film school all of my classmates had dreams of graduating and going on to edit a major action movie or write and direct the next AMC series. While those are great goals to work towards, the harsh reality is that production companies don't hire novices to fill major roles. You have to work your way up, and that usually means starting as a production assistant. And what you'll learn is the PA is both an absolutely crucial player behind the scenes of a film shoot and one of the hardest working members of the crew.

Let's break down the role of the PA, starting with the most basic question possible.

What is a Production Assistant?

A Production Assistant, or PA, is the entry level position in filmmaking. Most PA's work generally for the production, supporting the rest of the crew and making sure all of their needs are met. There is no such thing as a "typical" day for a PA, and your responsibilities change daily. You may go from herding a crowd of extras one day to escorting Julianne Moore back to her trailer the next. While higher up positions usually stay put and deal with the current shot, PA's are working in the background on one (or ten) of the hundred other details required to ensure the shoot runs smoothly. While the duties of a PA vary from production to production, some common tasks are:

The PA in Action

Being a PA often means long hours for little pay. As the low man on the totem pole, PAs are often asked to transport or house themselves for different shoots. It requires a lot of stamina and a good jacket, as you will be working outside regardless of the weather. This is not meant to scare you off or make you think that being a PA is only for the rugged. Being a PA is actually an exciting and rewarding beginning to your film career.

As a PA, your responsibilities often do not carry over to the next day, and despite the long days there is no work to take home with you. Many PAs are shared amongst departments, so you will be exposed to several facets of production and have a constant opportunity to network. "It never gets boring. Every day you're always going to someplace cool, someplace different," says Alex Cody, a freelance PA in New York City. "Wherever the set is, you're always working with different people. One day you're on a film set shooting a private concert and another day you're on a farm in the middle of nowhere. You'll have a chance to work for the people you admire, and each day can be a new learning opportunity."

Victoria Clougher, a PA at an animation studio, shared her experience working as a studio PA with the hopes of moving up to an assistant director role. "It's an important lesson to be able to do a job regardless of what it asks of you, and do it well. You get to know the inner workings of not only the studio but also of how people work. That definitely prepared me for being able to move up into a higher leadership position because I know how to work with people," she said. She also said that despite being at the bottom of the production hierarchy, it's important to know when to speak up and when to take care of something without being asked to. "Taking initiative as a PA shows that you are ready and able to manage issues and see potential problems down the line which is a great asset to have as a higher up in production."

You never know where your hard work as a PA will take you. Kathleen Kennedy, the producer behind Steven Spielberg's Schindler's List and War of the Worlds started out as a PA for his 1979 film, 1941. Even Malia Obama understands the importance of working your way up. The First Daughter recently worked as a PA on CBS's upcoming Extant. Just make sure you're always being proactive with your time on set. As a PA for HGTV, Eve Seiter advises, "Take initiative and be observant. See what people who have been there a while find important and make sure those things are done before they tell you."

How to Get Started

If you have dreams of working in film someday and want to get started as a PA, try a few of these tips:

1. Put together a resume. Because the PA is an entry level position, production companies aren't necessarily looking for seasoned industry professionals to fill this role. While your resume should include any and all production experience you have, you should also include experience that highlights your ability to be resourceful and professional. A PA is meant to help, so a candidate that shows they do not need their hand held is much more desirable than someone who has been on set as an extra in several TV shows.

2. Join a Job Site. StaffMeUp and ProductionHUB are great resources for finding productions in your area, regardless of what state you are from. As with any careers site, make sure you are keeping your profile up to date and include a photo that is just your face and has no distracting elements.

3. Network. I love networking – it's a chance to have a professional social life! Use LinkedIn or one of the job sites above to find working PAs in your area and invite them out for coffee to pick their brain. People love to talk about themselves, so make sure to keep it about them and familiarize yourself with their resume to help guide your questions.

4. Research. More and more productions are shot on location for authenticity, so you don't need to live in New York City or LA to work in film. Check local news outlets and production websites to see if anything is being produced in your area.

5. Make sure your license and passport are up to date. Many productions require at least some travel, which can mean some really amazing opportunities for you as a PA to see cool places. Make sure you've got up to date paperwork so that when you do get hired for a production, you don't have to turn it down.

6. Learn industry terminology. You can't distribute call sheets if you don't know what they are. Because PA work is freelance, you are constantly "looking for a job." It's a lot easier to get hired with a company you've already worked with, especially if you acted like a pro and could do the job without a lot of guidance. Make sure you can talk the talk (especially in a walkie)!