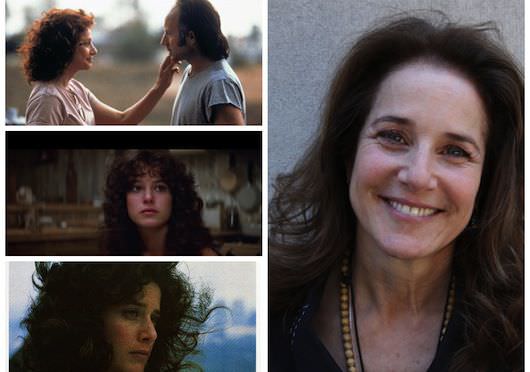 Debra Winger was recently the recipient of a lifetime achievement award at the 13th annual Transylvania International Film Festival. This was a mistake on the festival’s part. Of course Winger is worthy of an award, there’s just no need to give her one with the word “lifetime” attached to it. Winger reportedly told Michael Kutza, the founder of the Chicago International Film Festival and feature film jury president in Transylvania this year, that the festival would be wise to change the award’s name to “career” achievement, alerting Kurtza and the rest of the festival crowd that “she’s not about to die.”

Winger is wonderful. Not only should this be the title of someone’s biography of her, but this was also the sentiment that was floating around the 16th annual Provincetown Film Festival. Provincetown is still that small little artist colony (only now with a few more piano bars), and although the festival attracts iconic filmmakers year after year, it's so intimate a gathering that word spreads quickly and easily. It’s a low key affair with high caliber talent, and goes down like a crisp glass of bone dry white after attending the larger and far less intimate mega-festivals like Sundance and SXSW. It’s the type of environment where, waiting to interview Barney Frank, you can order a glass of that bone dry white from the bar and hear John Waters say, "Thank god, they’ve put out the cookies,” and find him standing right next to you, munching away. So the word on Winger, from arrival to departure, was that she was just wonderful. She proved it on stage this past Saturday night, when she accepted her second film festival award in less than a week and exuded warmth and, of course, wit. Only in Provincetown they were wise enough to give her a “career” achievement award, the Faith Hubley Memorial Achievement Award to be exact.

More Winger, please. This is another sentiment that didn’t just float around at the festival, but floats in the ether for all fans of great acting. The iconic actress of Urban Cowboy, An Officer and a Gentleman and Terms of Endearment famously ditched Hollywood in 1995 and moved to New York at 40. She's since returned, on her own terms, producing independent films, shepherding documentaries (Gasland, 2010) and starring in them as well (The Being Experience, 2013, with Yoko Ono as composer, no less) and co-starring in Jonathan Demme's ensemble film Rachel Getting Married in 2008, with Anne Hathaway and Anna Deavere Smith to name a few of her costars.

When I asked her if she’d be interested in doing some television, considering it’s the medium’s golden era according to people capable of tracking mediums and their eras, and acknowledging that there seem to be a lot more complex roles for women available on television now, Winger said that it’s not that there’s better roles for women all of a sudden, it’s that those roles that have been written and written again over the years are finally getting made.

“It’s not so much the shows, it’s the networks,” Winger said. “HBO, Netflix, FX. Yes, there are the shows that are churning out good shit, but it’s stuff that’s gotten rejected in the past. It’s these networks…you have to give a nod to someone over there, to whoever is saying yes to these projects.”

Winger says what interests her is what’s happening at large that has allows for shows like The Sopranos, The Wire, Breaking Bad, and Orange is the New Black to get made. “I am interested in that petri dish…what creates the environment that allows this? It’s the type of environment I like building in.”

I pressed her on how there really does seem to be more roles for serious actresses on television now, and isn’t that something that interests her?

“There seems to be, yes. But they’re not asking me. [Laughs] I think I've been lying pretty low, so I don’t think I was really on anyone’s radar,” she says. “My son drags me out and says, “You’ve got to watch Orange is the New Black, and I did, and I’m going, ‘Wow, they look real. They don’t all have face-lifts. I’m interested in that.”

At this point I blurt out that she looks great (she does), and she thanks me, and then asks rhetorically what a 59-year old woman looks like.

We get to talking about what The Credits usually covers—all the below the line talent that help make film and television possible, and her eyes light up. I’d mentioned that right before speaking to her I’d sat down with writer/director David Cronenberg, and Winger smiled and said, “so you’ve talked to two people who are actually passionate about below the line.”

For her 2001 film Big Bad Love, directed and co-starring her husband, Arliss Howard, Winger was not only the co-star but a producer. And not just an executive producer (a producing title that can have many meanings, a lot of them purely notional), but a line producer. “I negotiated union contracts, paid the caterers…it’s a thankless job.”

Winger’s candor has created some of the more memorable Hollywood anecdotes in recent memory. A 2001 interview she did with Holly Millea for New York Magazine is a treasure trove of hilarious, acidic recollections of some of her most memorable roles. Reading about her experiences on the sets of two of her breakout roles, Urban Cowboy and An Officer and a Gentleman, would be painful if she wasn’t so funny. On being 23 and seeing famous producer Robert Evans walk on set of Cowboy with his shirt front covered in cocaine, Winger said to Millea, “What, is he made out of it? And I’m, like, 23 years old and I see Robert Evans, and that was Hollywood to me. It was kind of a gift if you think about it. Had it been any less ridiculous, I might have bought it. I might have bit.”

What I wanted was some positive memories, some time on set working with non-Robert Evans types, and she had plenty of them. I asked her if there is a crewmember that disserves more credit then they typically get, and her answer was, “all of them!”

“There is not a film I have been on, good or bad, that I do not have friends from. The costume designer, the set decorators, the prop masters—they are my friends now. I don’t have that many actor friends, or producer friends. We were just talking about John Toll, who was the camera operator on Urban Cowboy and who has since won Academy Awards as a cinematographer [in 1995 for Legends of the Fall and in 1996 for Braveheart].  John was the one I would look at when Jim [Bridges, the director] was busy. This was one of my first big films, so I learned right away that he was the only one looking at me, this was back in the days before everyone had monitors and stuff.  So John was the only one looking through that camera and I felt intimate with him. It was like, holy shit, I was looking at him like I am looking at you right now. He would tell me, ‘You hit it.’“

Winger currently is working in television, on the upcoming Lifetime miniseries The Red Tent, playing the Biblical character Rebecca. If there is a God, she’ll be available for an interview afterwards so she can give her version of the Book of Genesis.

In our version, God called the light 'day' and the darkness 'night' and then said, "More Winger, please."