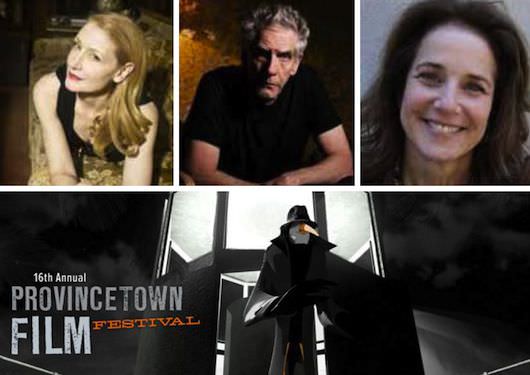 The 16th Annual Provincetown Film Festival (PFS) brought together iconic filmmakers, a beloved champion of LGBT rights (and much more), journalists and film lovers for another stretch of perfect weather and great cinema. Award winners David Cronenberg (Filmmaker on the Edge), Patricia Clarkson (Excellence in Acting), and Debra Winger (Faith Hubley Career Achievement) joined former congressman Barney Frank as some of the marquee names at the festival, along with, of course, John Waters, the festival’s guiding spirit. PFS is a showcase of new talent as well, a venue for emerging independent film that “explores equality and tolerance and the efforts to thwart them,” as the festival’s mission states. It is fitting this takes place in Provincetown, America’s oldest art colony.

Scholar and film critic Ruby Rich interviewed Winger on stage at Town Hall, the main screening location for the festival. Winger, looking lovely and relaxed in a jean jacket, was as open and unassuming as a legendary actress (and someone winning an award) has any right to be. The iconic actress seemed almost uncomfortable accepting the award Rich presented her at the end of the interview, making it clear to the festival audience that it was a “career achievement” award and not “lifetime achievement”—she has much more great work in her.

The Urban Cowboy star explained to Rich that capturing the truth in a role for her is a bit like an Impressionist painting; there are chips of color that change qualities in different lights. A signature component of Winger’s charm is her wit and her candor. We will be publishing our interview with her later this week, but a sample of this was on hand for the Town Hall crowd throughout her interview. When Rich asked whether there are enough roles for women of a certain age, Winger rephrased it: “are there roles for women with rolls?” When Rich suggested that Winger’s performance in Urban Cowboy had “turned” many women lesbian, Winger reminded the scholar and critic of, among other genres, gay films, that it’s not like lesbians are werewolves—she didn’t “turn” anybody.

Winger was in great form throughout—affable, laid back, and whip-smart. The montage of her work was a reminder of how many incredible roles she's inhabited over the years—from her early 80s trifecta of Urban Cowboy, An Officer and a Gentleman and Terms of Endearment, to The Sheltering Sky, Shadowlands, A Big Bad Love and Rachel Getting Married. Her work in James Bridges' Mike's Murder is considered one of the most overlooked performances of the 1980s. Winger, radiant and charming as ever, will hopefully be throwing herself into more roles soon.

There was a nice connective tissue between her and the night’s next big honoree, writer and director David Cronenberg. Cronenberg’s latest film, Maps to the Stars, concerns celebrity obsession, focused around an actress of a certain age (Julieanne Moore) who will do anything to win a part. Cronenberg and Winger met while she was filming The Sheltering Sky in 1990 in Morocco and he was there scouting locations for Naked Lunch (talk about two books only the bravest filmmakers would attempt to adapt). Cronenberg was interviewed by John Waters, the first recipient of the Filmmaker on the Edge award in 1999. Waters introduced the boundary pushing Canadian auteur by telling the audience that Martin Scorsese had once admitted he was scared to meet the man behind Scanners, Dead Ringers and The Fly.

The Cronenberg montage elicited gasps and laughter from the theater, his scenes are that singular and that unsettling. Some of those vignettes came from films you might not remember well (Rabid and The Brood) but they had the unmistakable quality of Cronenberg’s touch—go for broke visuals of human beings transforming in all manners of horrible ways, and the underlying humor of even his darkest visions. Scanners, Videodrome, and of course, The Fly, were all instantly recognizable. Waters admitted his favorite film of Cronenberg’s is Crash, the diretor’s fearless adaptation of J.G. Ballard’s novel about a TV director surviving a hideous car crash and finding, once recovered, a sub-culture of maimed car crash victims who believe automobile accidents create raw sexual energy that can be harnessed. The film scandalized the 1996 Cannes Film Festival. The head of Cannes at the time, Gilles Jacob, purposely programed Cronenberg’s film in the middle of the festival so it could “explode like a bomb,” Cronenberg said. “And he was right. The press conference was vicious, people were shaking their fists at us,” he said. Crash went on to win the Jury Special Prize anyway.

Cronenberg corrected what he feels is an erroneous label he’s been given, that of the auteur of “body horror.” I’ve never used that term myself,” he said. “The one I like best is when someone said that Cronenberg is the king of venereal horror. It’s a small kingdom, but it’s mine.”

The HBO Audience Award for Best Narrative Feature was One Chance, directed by David Frankel.

The HBO Audience Award for Best Documentary went to Alive Inside, directed by Michael Rossato-Bennett.

The John Schlesinger Award, presented to a first time documentary or narrative feature filmmaker:, went to Keep on Keepin' On, directed by Alan Hicks.

The Tangerine Entertainment Juice Award, presented to a female filmmaker for her first or second narrative feature, went to Appropriate Behavior, directed by Desiree Akhavan.

The Jury Award for Animated Short Film went to The Missing Scarf, directed by Eoin Duffy.

The Jury Award for New England Short Film went to We Could Be Your Parents, directed by Charlie Anderson.