Spider-Man’s home has always been New York City, but The Amazing Spider-Man 2 is the first of the comic book adaptations to be filmed exclusively in New York State. It’s also the largest, with locations that included not only Manhattan, Brooklyn, and Queens, but Long Island and upstate New York.

Shepherding the production were producers Avi Arad and Matt Tolmach. The industry veterans work together so closely, they finish each other’s’ sentences, jumping in with better zingers. The two producers, who are now at work on The Amazing Spider-Man 3 as well as developing Spider-Man offshoots Sinister Six and Venom, talked to The Credits about their experience filming through a bitterly cold winter, crowds, and unpredictable weather in their quest to shoot a Spider-Man that was undeniably on location. 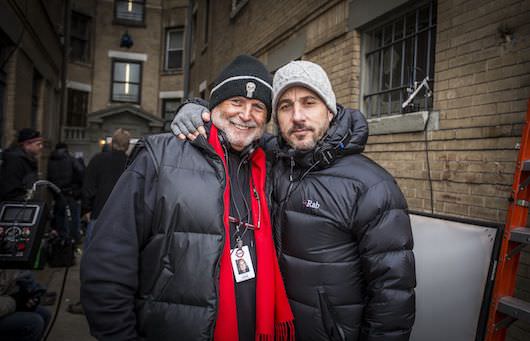 How would you describe your role on set?

Avi Arad: The only thing we don’t do is hire craft service.

Matt Tolmach: We are linked and partners in everything. We do everything from conceiving what the movie is going to be to developing scripts with the writers. We’re on set every single minute of every day, in New York for casting, through to the delivery of the digital print.

Arad: And most important, we control the budget.

New York has increasingly made itself more and more friendly to productions, and from what I saw you got some great locations in New York City.

Arad:  Everything about the story, everything about Peter’s existence—the schools he goes to, the streets he runs and flies through—it’s all really in New York. New York is a character. So, we had this opportunity to have one of the major characters on location. Plus, as you’re probably aware, New York made it attractive for us. It wasn’t only New York City. We ended up shooting a sequence in Rochester, New York, which was a wonderful thing to participate in, because Rochester is having major unemployment issues.

Tolmach: In New York, there’s a limit to how fast you can drive in order to do a car chase through the city, so we went to Rochester because it gave us more freedom and flexibility in terms of what we can do. Obviously it’s a less crowded city, and there’s no thirty mile-per-hour speed limit. When you want to do a car chase with a big rig, an armored truck, and many, many police cars, as we do in the opening of the movie, that’s really a limitation.

What was different about how this movie tried to capture New York City?

Tolmach: When productions go to New York, a lot of time they shoot in the same places, because they’re trying to say to the audience, ‘Look, we’re in New York.’ We really wanted to shoot New York in a way that wasn’t the predictable New York you see in every movie, so it was important to find locations that were unique. 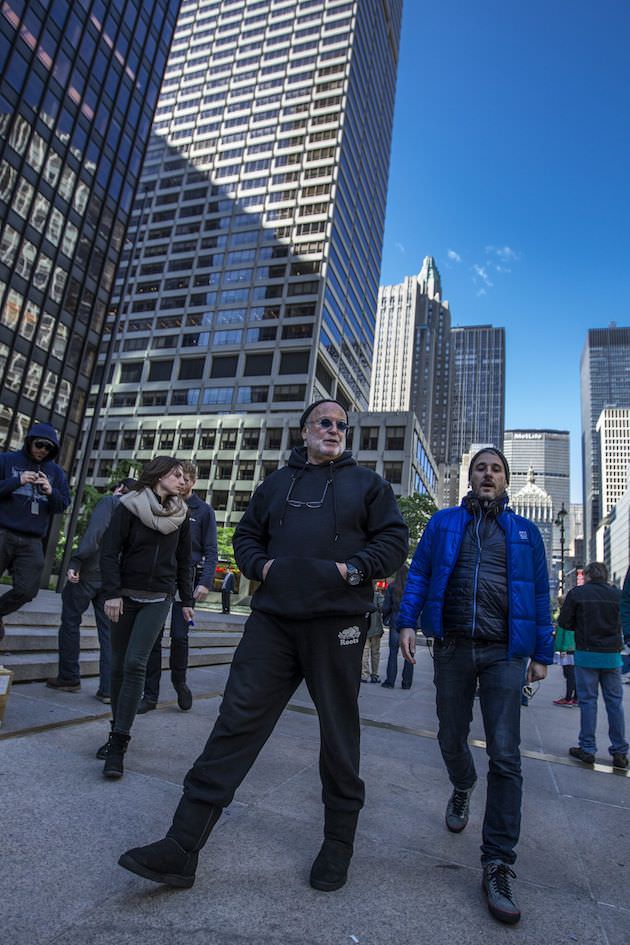 What were some of those unique locations?

Tolmach: We spent a lot of time in [the Brooklyn neighborhood] Dumbo [for non-New Yorkers, 'Dumbo' stands for 'down under the Manhattan Bridge']. We shot in the train there, we shot on the beach, and the carousel. That was an incredible location. We really made a meal out of that.

Arad: The park there was full. People were there with their kids, on the carousel, and their camera, and they did not interfere, which was wonderful.

There’s also a huge set piece in Times Square, one of the city’s most crowded (and recognizable) locations. How did you shoot it?

Tolmach: Times Square is not a place you can shoot for a long time. You certainly can’t destroy the billboards and the stuff we needed to do. We shot in Times Square for I think four hours. Then we built Times Square in Long Island, at the backlot. We just had to find a place big enough to recreate Times Square. That was an amazing feat in terms of construction and the sheer manpower. Times Square is completely lit up by billboards, so the source lighting was really hard. 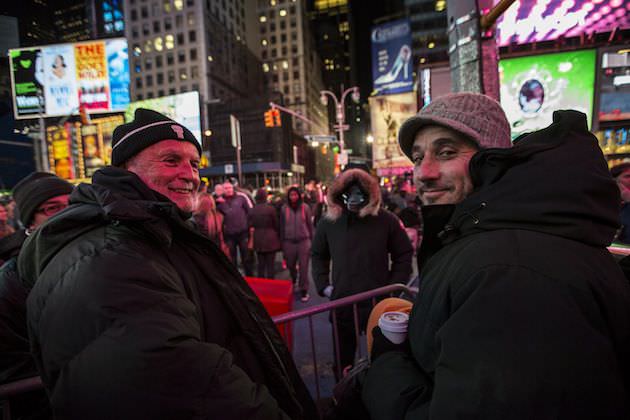 I live in New York City, and saw the production filming a sequence at a bandstand in the East River. I felt like that space was so hidden, I was impressed that the location team found places like that.

Tolmach: The location manager is a guy named Jason Farrar, who is great. He, along with Mark Friedberg, who is our production designer, is one of these guys who loves New York, and his family is from New York. He’d talk to us all the time about New York being a character, and the texture of the old and new. They, along with [director Marc] Webb, had a very clear sense of what they were looking for. I remember Friedberg showed us a photo of that bandstand. They knew New York so intimately, they were able to go out and find locations like that. Like you said, people pass it, you don’t know what it is, and suddenly it’s in our movie. That was the result of working with people who are super brilliant at what they do, and, people who also know and love New York. 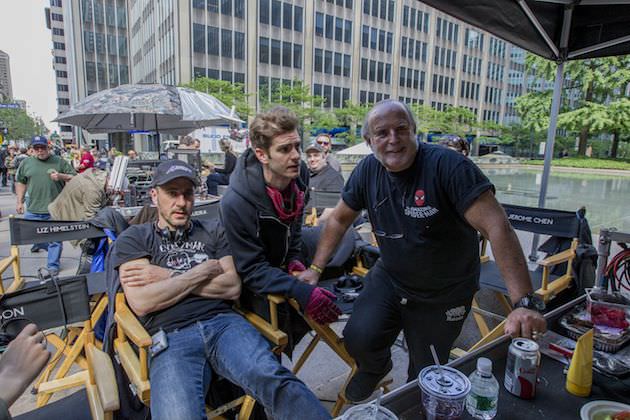 What’s been the response to the New York locations so far?

Arad: We just came from a trip promoting the movie around the world, and people notice the locations.

Tolmach: It came up in every territory. They said, ‘You really shot in New York?!’ And they liked that. There are incredible production designers and art directors and CG, but there is something about standing out in the middle of Chinatown at two in the morning. You just can’t reproduce or fake it. It’s never going to have the authenticity of being right there. It doesn’t mean there weren’t hardships or cold…

Arad: And rain, and cold, and snow…

Tolmach: …and traffic limitations, but what you get in return is something spectacular that’s undeniably New York. 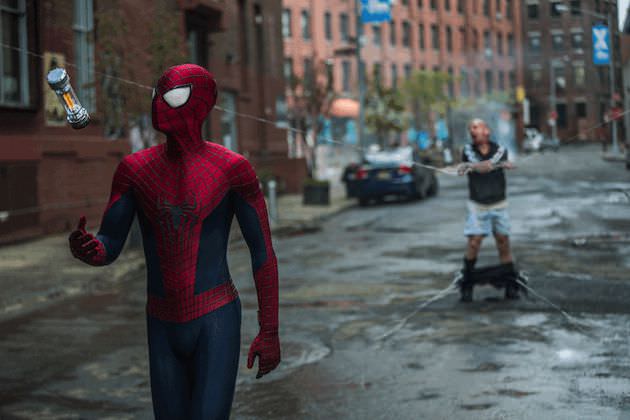 What kind of people did you tap locally?

Arad: We had the most courageous, excited-to-be-there extras, who we hired locally. The movie was not shot for winter, but it was shot in the winter. At night it was twenty degrees, and they were dressed for seventy-five degrees. They were just incredible, and wanted to be part of the experience.

I imagine the crowds during filming must have been much different in Times Square compared to more residential neighborhoods.

Tolmach: Honestly, I think there’s something great about New York, which is that people seem to accept it. They just sort of allow you to shoot.

Arad: Also, all the neighborhoods were fascinated. We were shooting for a while in the Armory, and we actually created a connection with a highly, highly Orthodox neighborhood. What was absolutely amazing for Matt and I was that they knew Spider-Man, and how fascinated they are by movies, although they’re not supposed to look at them. They would come around, and we would try to talk to them, and sometimes we'd succeed. Sometimes they just smile and walk away.

What’s next for the Spider-Man series? Will sequels and offshoots like Venom, Sinister Six, and next Spider-Man be shot in New York too?

Tolmach: All those characters come out of the Spider-Man universe, but they’re movies that are essentially unto themselves. Where the movie takes them will be a combination of New York and other places, but they’re all characters that emanate from New York.