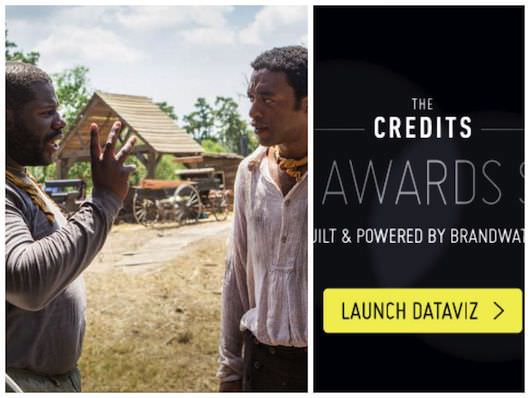 The things that we could agree would happen, like Ellen hosting with her easy going charm (has there ever been a more relaxed, amiable host?) and Gravity mopping up a slew of technical awards. And how did our Social Awards Season App, the DataViz, fare in predicting the winners?  Let’s have a look.

Actor in a leading role

Matthew McConaughey lost the weight and put on one of the best performances of his career to take home Oscar for his work in Dallas Buyers Club. Yet the public was not convinced McConaughey would win, with only 3% in his corner. The critics, however, were more confident—15% predicted he’d win. This category was a major head scratcher—an astonishing 91% of the public, and 57% of the critics, had Leonardo DiCaprio winning his first Oscar for his role in The Wolf of Wall Street.

Actor in a supporting role

Jared Leto was the night’s first award winner, nabbing an Oscar for his performance as Rayon in Dallas Buyers Club. The public was all over this award, with 72% predicting Leto would win, backed by 43% of the critics. Barkhad Abdmi, nominated for his sensation performance in Captain Phillips, garnered 10% of the public’s vote and 14% of the critics. The critics were actually more convinced (19% of them) that Jonah Hill would take home the Oscar for his work in The Wolf of Wall Street, but only 3% of the public supported this idea.

Actress in a leading role

Cate Blanchett was always the favorite for blowing peoples’ minds in Blue Jasmine, with 44% of the public and 39% of the critics correctly predicting she’d win. After Blanchett, Amy Adams, Sandra Bullock and Meryl Streep were all neck and neck in the public and critics’ minds, but Blanchett seemed to own this category from the jump.

Actress in a supporting role

In a night of charming acceptance speeches, Lupita Nyong'o’s for winning her Oscar for her role in 12 Years a Slave was among the most charming—and 34% of the public and 40% of the critics predicted this moment. Yet, 39% of the public and 47% of the critics thought they’d get another chance to watch Jennifer Lawrence ascend to the stage steps (and perhaps repeat her legendary fall from last year’s win) and win the award.

The DataViz correctly predicted the winners in Best Adapted Screenplay, Best Original Screenplay, Best Animated Feature, Best Foreign Language Film, Best Production Design, Best Cinematography, Best Makeup & Hairstyle, Best Costume Design, Best Film Editing, and Best Visual Effects. It was split between correct guesses from either the public or the critics in Best Documentary Feature and Best Original Score (we’ll put these in the incorrect guess category, however). So how’d we do? The DataViz was correct 77% of the time. We'll compare our numbers to those of the other big time Oscars prognosticators out there and see how we stacked up.