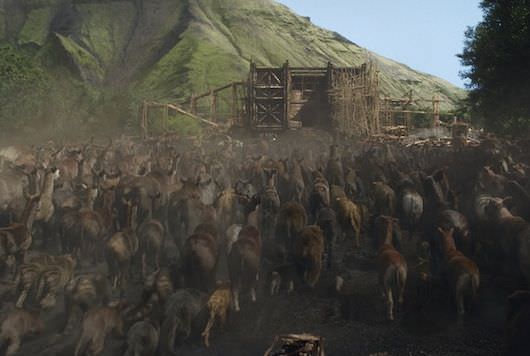 At first blush, it appeared that Noah represented writer/director Darren Aronofsky’s first real foray into pure big budget spectacle. The indie auteur that burst onto the scene with his twitchy, unsettling debut Pi, only to follow that up with one of the most breathtakingly devastating cinematic depictions of addiction in many years with Requiem for a Dream, was now going big budget CGI in the retelling of the Biblical story of Noah's ark on a grand scale.

Only this isn’t the case.

Noah has long been a dream of Aronofsky’s, as Tad Friend reported in his profile of Arronfsky in The New Yorker, and Cathleen Falsani explained in her interview with him in The Atlantic. Noah was one of ten film ideas the director wrote down in the mid-nineties that he wanted to make. So far, all six of his films—Pi, Requiem for a Dream, The Fountain, The Wrestler, Black Swan and now Noah—come from this list. In fact, as he told Falsani, he first became fascinated with the Biblical story when he was 13. Aronofksy wrote a poem about Noah that his teacher at Mark Twain Junior High School in Coney Island, Brooklyn, Mrs. Fried, entered into a United Nations contest. He won the contest. To thank his former teacher, he dedicated the graphic novel version of the Noah story he and co-writer Ari Handel wrote to her. He then put her in a small role in the film. “She’s the old lady with the one eye who, when Russell [Crowe] is going through the refugee camp and sees the animal, she comes out and goes, "You! YOU!" That’s Mrs. Fried,” he told Falsani. [Here is a video of Vera Fried reenacting her scene with Russell Crowe.] 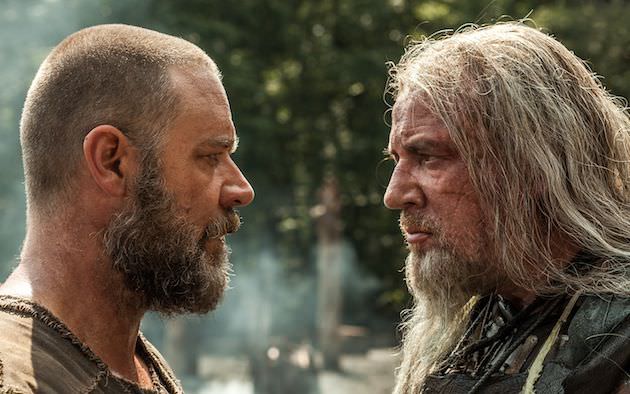 Aronofsky and Handel’s Noah honors the Bible story without being beholden to it’s limited narrative arc. As Friend puts it, “Once the Lord takes against the creeping things and the fowls of the air, the rest is mostly rain.” A.O. Scott of the New York Times writes, "The information supplied about Noah in the Book of Genesis is scant — barely enough for a Hollywood pitch meeting, much less a feature film." Aronofsky and Handel dug into Noah’s psyche (his visions come after drinking hallucinogenic tea), which borders on, then becomes, total madness, as well as his complex relationship with his family. His wife, sons and adopted daughter are eventually subsumed by his visions—nothing can stop him from fulfilling his creator's commands, and his once close-knit family is riven by his monomaniacal pursuit.

The writers also give Noah a proper antagonist  in Tubla-Cain, played by one of the great heavies in film, Ray Winstone. Tubla-Cain is a minor character from the Bible, but here he is a murderous, but richly drawn, descendant of Cain, desperate to get on the ark. They have turned the central conflict from the Biblical version—Noah and God—into a conflict between the descendants of Seth (Noah’s family, the good guys), and those of Cain (Tubal-Cain and his people, bad). In many ways, Tubla-Cain is the more sane of the two—he thinks Noah should use his ark to help save mankind. Needless to say, Noah's not having it.

Then there are the six-armed fallen angels, called Nephilim in the Bible. Again, Aronofsky and Handel have taken very minor characters (they are mentioned just twice, the first time is immediately before the story of Noah's ark) who are massive angels doomed by God to live on Earth in torment for helping man, and expanded them into major players. They help Noah construct the ark and, eventually, fight for him against Tubal-Cain and his hordes.

There’s also, of course, the environmental angle to the story—watching a world subsumed by cataclysm due to mankind’s behavior. 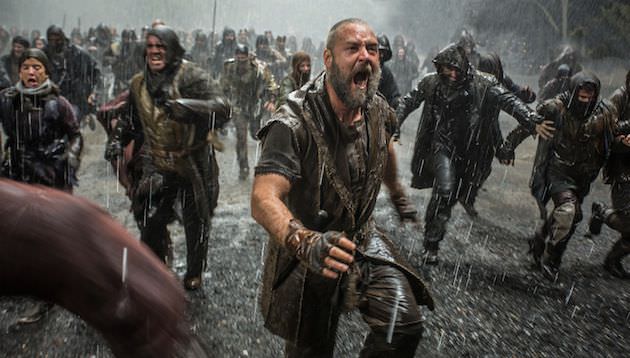 To make the film he had dreamed of, he would need a major studio to go in, whole hog, on his vision. Paramount came on board in June of 2011. By July of 2012 Aronofsky, his cast and his massive crew began filming, primarily in New York, with additional footage capture in Iceland and elsewhere. 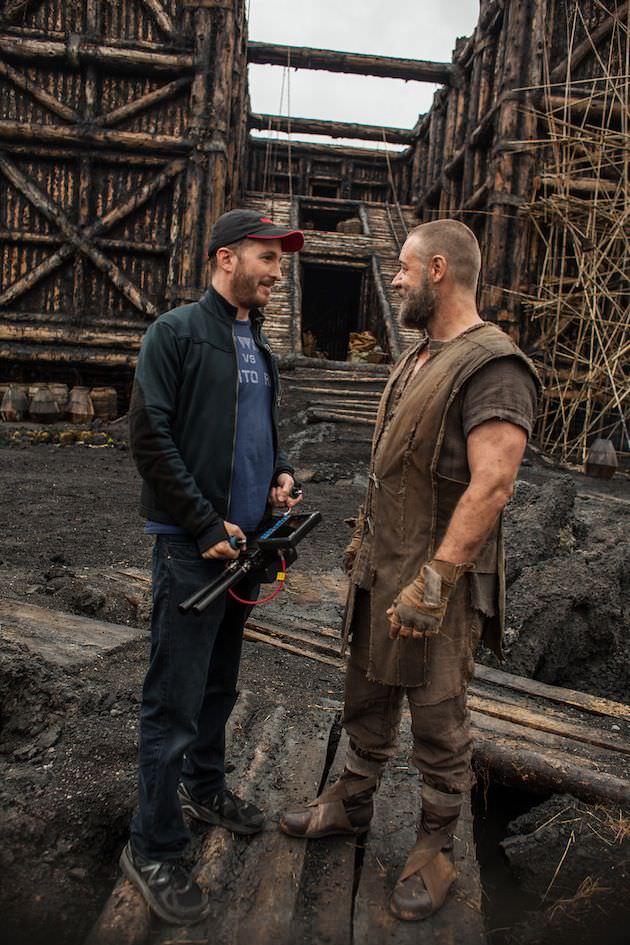 Aronofsky and his crew created storms of biblical proportions at Brooklyn’s Marcy Armory, a 165,166 square-foot military facility in Williamsburg. They shot scenes inside Drill Hall #2, which has been home to a number of film shoots, the enormity of which (59,000 square-feet) allowed the Noah crew to create a deluge that would soak the actors with rain and buffet them with wind. Aronofsky’s Noah includes explosives (the first of his career, made possible in this ancient story through a magical substance called ‘tzohar’)—these scenes were filmed in a meadow in Oyster Bay, and required all sorts of pyrotechnics, specialized crew, accelerants, and the requisite stunt people. The scale of the film required more equipment and crew than Aronofsky had ever worked with—what they pulled off was, if not a miracle of Biblical proportions, at least a feat of human ingenuity and effort.

"Make for yourself an ark of gopher wood; you shall make the ark with rooms, and shall cover it inside and out with pitch. This is how you shall make it: the length of the ark three hundred cubits, its breadth fifty cubits, and its height thirty cubits." -Genesis 6:13, 6:14, 6:15

As Bill Cosby put it in his legendary riff on this passage, Noah’s response was, “Right! What’s a cubit?” It is, of course, an ancient measurement, approximately equal to the length of a forearm (who’s forearm, though? Certainly not God’s). It’s typically measured at 45.72 centimeters, or 1.5 feet.

“There was a huge issue of what is this ark going to look like,” Aronofsky says in the behind-the-scenes featurette released by Paramount. “The idea was, let’s go back to what God tells Noah in the bible. [The Bible] doesn’t talk about a bow…Noah wasn’t trying to take the ship anywhere. It just basically has to survive the flood.” 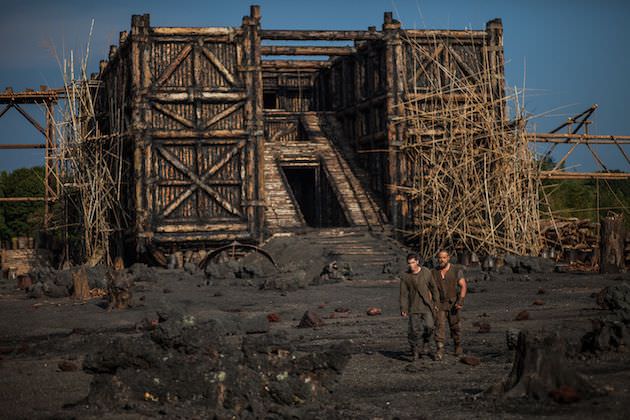 The ark was built at Planting Fields Arborteum State Historic Park in Oyster Bay, New York, and was sturdy enough to stay standing during Hurricane Sandy. Rather than rely on a purely CGI creation, Aronfksy had a third of a three-story, 55-feet tall, 85-feet wide, 165-feet long pine ark built (it was extended digitally to be roughly 500-feet long). That’s roughly 2.5 city blocks long, and it took Mark Friedberg, the film’s production designer, more than a year to design and six months for he and his crew to build. They used materials that Noah and his family would have had access to for the exterior scaffolding, keeping straw, sticks and leaves together with the pitch described in the Bible (essentially tar). The bottom of the ark, the ballast, goes down another fifteen feet, and was made with volcanic rock. Then there's the ramp. 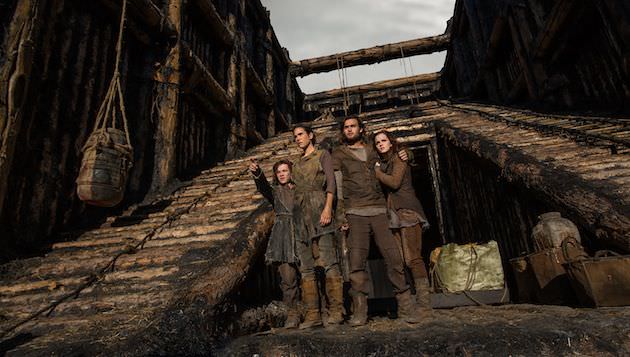 The final result decidedly does not resemble any ark you’ve seen, or imagined, before—it was built to resemble a colossal coffin.

Noah by the Numbers

Whatever the box office results of Aronofsky’s ambitious, very personal take on Noah turn out to be, one thing is certain—the film was a massive success for the state of New York.  Statistics released by Paramount show that production brought $60.5 million in spending to the state, along with nearly 2,000 jobs, $30.2 million in wages paid to local employees, and $3.6 million in taxes back to the state government.

Films of this scale can become micro-economies of their own, bringing in hundreds of vendors to fulfill the needs of cast and crew during all phases of production. One example of this was Lenoble Lumber Company of Long Island, which made nearly $650,000 providing materials for the shoot, as well as Bay Crane, Inc, which profited to the tune of $1.1 million by providing transportation and crane solutions during production.

Many of the nation’s top critics have already weighed in on the film, and most of them concur that the film blew them away. Peter Travers of Rolling Stone calls Noah a “visionary art film that asks us to examine what we believe.” A.O. Scott at The New York Times writes, “at its best, it shares some of its namesake’s ferocious conviction, and not a little of his madness.” And Todd McCarthy at The Hollywood Reporter says that “Darren Aronfosky wrestles one of scripture’s most primal stories to the ground and extracts something vital and audacious.”

In the end, the film seems to be the fulfillment of a dream of a 13-year old boy, a bold gamble by a major film studio to produce, on a grand scale, the work of an exacting visionary, and a huge win for the state it was filmed in.

"Then God said to Noah and to his sons with him: 'I now establish my covenant with you and with your descendants after you and with every living creature that was with you—the birds, the livestock and all the wild animals, all those that came out of the ark with you—every living creature on earth. I establish my covenant with you: Never again will all life be destroyed by the waters of a flood; never again will there be a flood to destroy the earth.'"

Featured image: Two by two (but really in a massive rush), two of every animal heads for Noah's ark. Courtesy Paramount Pictures.