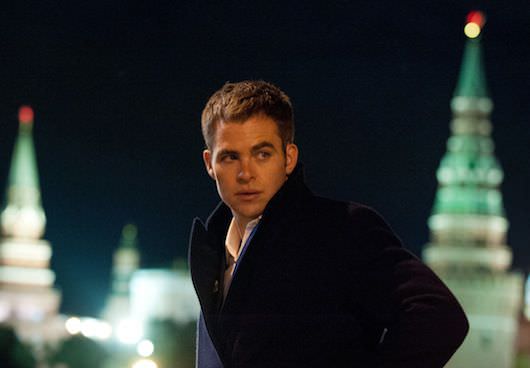 With Jack Ryan: Shadow Recruit opening this Friday, Paramount is hoping for a successful re-re-reboot (after 2002’s The Sum of All Fears, with Ben Affleck), to infuse this 24 year old spy fantasy franchise culled from Tom Clancy’s novels, with the realistic grit, vim, and vigor deployed so successfully in the Bourne films, and adapted brilliantly by the James Bond franchise in Casino Royale and Skyfall.

In its long history, the spy movie has exhibited stark realism or expressionist fantasy in its plot and sets, and in its depictions of its villains and heroes. Perhaps the most memorable and interesting spy movies combine elements of these two styles.

Here are some lesser-known, exceptionally exciting spy films to prepare you for this weekend’s Jack Ryan.

Spies (aka. Spione, 1929), German director Fritz Lang’s interwar spy epic, deftly combines two of the prevailing styles of German movies at the time. In its deployment of complex plotting, large scale modernist sets for the villain’s lair, and a larger than life super criminal spy named Haghi (who fronts as a famous wealthy banker), we see the full flowering of the German Expressionist style that made its way into the Hollywood film noirs in the 1940s. Opposed to this is the charming, dutiful hero, Agent “No. 326,” of the Secret Service, tracking Haghi’s diabolical agents via the real, gritty sidewalks, roads, and trains of Germany at the time.

Director Alfred Hitchcock’s British and American spy movies prove “The Master of Suspense” could do no wrong when it came to exploring all the facets of the spy genre. He made gritty realistic spy thrillers in 1930’s Britain and in his early American career. The Man Who Knew Too Much (1934), The 39 Steps (1935), Secret Agent (1936), and the brilliant Sabotage (1936), are tense, exciting, British films pitting innocents against various unnamed European spy agencies or anarchist groups. With the world again at war, Foreign Correspondent (1940), Saboteur (1942), and Notorious (1946), have the Hitchcock of Hollywood naming the Nazi enemy – dramatizing it’s evil, sinister threat and gangster ethos – and subjecting his innocent protagonists to physical, mental, and moral danger. His 1959 masterpiece North by Northwest is a capstone of sorts to Hitchcock’s spy film series, showing the US intelligence services to be a Kafkaesque, hellish hall of mirrors, in which any man – even the most beguilingly self-absorbed ad man played by Cary Grant – can become ruthlessly ensnared.

With the Cold War of the 1950s-1980s, the realistic and expressionist spy film styles took severely divergent paths. The worldwide success of the James Bond franchise, with its fantastic villains, gadgets, and women, not to mention the character of Bond himself, who continually escaped unscathed from ever more outrageous violence, was wonderfully counterbalanced by film and TV adaptations of Len Deighton’s and John LeCarré’s psychologically realistic spy novels. LeCarré was himself a former intelligence officer for Britain’s MI-5 and MI-6 before he resigned and turned to fiction. In The Spy Who Came In From The Cold (1965), The Deadly Affair (1966), The Looking Glass War (1969), Tinker, Tailor, Soldier, Spy (1979), and Smiley’s People (1982), LeCarré’s operatives Alec Lemas (Richard Burton) and the imperturbable George Smiley (played by Alec Guinness on British TV), are deployed onto the battleground of cold war Eastern Europe, ferreting out defectors, double agents, and traitors within the British Intelligence establishment. Deighton’s Harry Palmer (Michael Caine), a working class British Army sergeant and imprisoned black marketer forced into the intelligence service, stalks his way through the secret, seedy underbelly of Western Europe and America in The Ipcress File (1965), Funeral in Berlin (1966), and Billion Dollar Brain (1967). Interestingly, these films were made by Bond producer Harry Saltzman and used many of the same crew as the Bond films.

A quartet of now classic British spy TV series from the 60s and 70’s brought the Cold War up to date and also dramatized the emerging theme of the intelligence community turning destructively on itself – a theme further deepened in movies from the 70s till today. Callan (67-72), starred Edward Woodard (American TV’s The Equalizer), as an intelligence service assassin at odds with his superiors. The Sandbaggers (1978-1980) dramatized the cynicism and moral dilemmas faced by MI6’s Directorate of Special Operations, Neil Burnside, in sending his agents out into the field and trying to maintain prickly relations with the more powerful C.I.A. Patrick McGoohan starred in Danger Man (60-62, 64-66) as John Drake, a secret agent for NATO. McGoohan quit after four seasons of this tough, gritty series, and created perhaps the most surreal and fantastic spy series ever, The Prisoner (1967). Here McGoohan starred as an unnamed former British spy who quits the service and is then drugged, kidnapped, and taken to a mysterious, isolated, seaside resort-type Village filled with other spies. Known only as prisoner “Number Six,” he is continually interrogated for secret information, whether by foreign agents or his own service is unclear.

With the revelations of Watergate, the FBI COINTELPRO program, and the C.I.A.’s Operation CHAOS and MKUltra programs, the modern spy movie dramatizes the dual themes of protagonists fighting enemies both outside and inside the intelligence agencies, operating in a world of uncertainty as to whom they are fighting for and against, and whether they are operating as individual agents or pawns in a larger unknown operation. In Three Days of the Condor (1975), Robert Redford is a deskbound CIA analyst who’s the sole survivor of an assassination hit squad that takes out his cover company office staff, sending him on the run in NYC to figure out who is after him – his superiors at CIA or foreign agents. In 2001 Redford flipped over to puppet-master, playing a retiring CIA officer in Spy Game. He mentors young agent Brad Pitt in Middle Eastern trade-craft, helps the agency betray him, and then double crosses the agency to assuage his guilt and rescue his comrade.  In David Mamet’s Spartan (2004), Delta Force member Val Kilmer is on the run from his own agency while trying to rescue the President’s missing daughter. Robert DeNiro stars in and directs The Good Shepard (2006), a thinly veiled history of the CIA’s counter-intelligence-chief James Jesus Angleton, played by Matt Damon. Body Of Lies (2008) finds Leonardo DiCaprio as a CIA case officer in Iraq tracking a terrorist.  Using traditional tradecraft to aid his pursuit, DiCaprio comes into conflict with his superior back in Washington D.C., Russell Crowe, who uses modern technology to aid in the hunt and yet has no compunction when it wreaks collateral damage for DiCaprio on the ground. Steven Soderbergh’s Haywire (2012), is a tough, short, action movie profiling a flinty, female black-ops government security contractor who is double crossed by her former lover and boss, left for dead, and fights her way back to clear her name and clean out her bosses clock.