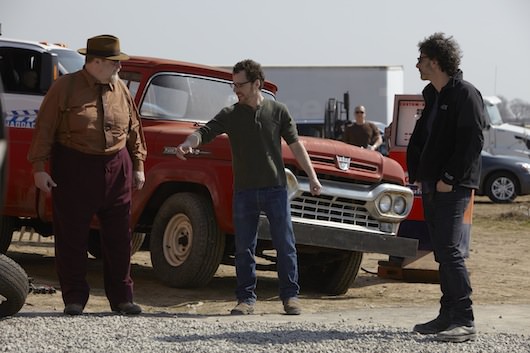 Some frequent collaborations between a director and actor are so high wattage they’re known by last name alone: Scorcese and DiCaprio. Burton and Depp. But other repeated pairings of a director and actor glow a little less brightly. Some are even under the radar. In part two of a two-part series, the Credits reveals what makes four such collaborations tick. Read part one here.

Key to collaboration: Appreciation of the Mexicano narrative

Trejo’s fearsome face may be at the height of recognition following his two episodes on Breaking Bad as Tortuga, the drug runner turned DEA informant. But Rodriguez first cast his 66-year-old second cousin as an unknown in 1995 for one specific reason: authenticity. "Too many actors play tough guys," Rodriguez has said. Danny is a tough guy. I just knew he would be believable." Trejo earned his authenticity the hard way: he served prison time throughout the 1960s, including a final, five-year stretch. When Rodriguez met Trejo during casting for Desperado, neither men—both Mexicanos—knew they were related. That discovery would happen later when Trejo’s relatives visited the set in Mexico. Yet the blood bond proved immediately thick. "We just hit it off," Trejo told Nextmovie.com. "He understands me, and I understand him.” Trejo, who describes himself as “the mean Chicano dude,” says a Rodriguez set is like “Disneyland, a lot of fun,” but saves his greatest praise for the director’s casting eye. He told the Austin Chronicle, “The people [Robert] gets fit the characters he has. You don’t have somebody trying to play this absolutely hard guy that doesn’t fit.”

Scene to see: Machete yanking the machine gun off an army trunk and mounting it on his chopper to blast away at attacking soldiers in Machete. Pure Rodriguez mayhem, pure Trejo menace.

The Coens have written every part John Goodman has played in their films following Raising Arizona specifically for the rotund, ostensibly jovial actor. No surprise there: Goodman has an insidious edge that lies just beneath a mask of warmth and likeability that gets audiences to buy into the surrealism of the Coens’ world. “Nobody writes like them,” Goodman told Hemispheres magazine. “There is a visceral feel for what they lay down . . . I just have a deep personal connection with the movies they do.” Ethan Coen in the Los Angeles Times said of Goodman, “Sometimes you can just hear the actor in the language. You write it and go, ‘I could just see John doing this and killing it.’” The three movie veterans also share a deep appreciation for cinema history and operate on a "shorthand" of esoteric film references, as Goodman calls their on-set collaboration. Joel Coen recalled directing the actor to "Everett Sloane" to his mark while filming Inside Llewyn Davis. "[John] knew what we were talking about," says the older of the brothers, who was referencing the crusty character actor best known for his performance as Bernstein in Citizen Kane.

Scene to see: Walter (Goodman) driving the Dude (Jeff Bridges) to drop off the kidnapping ransom in The Big Lebowski. Walter’s barely-contained excitement about joining the criminal escapade while trying to manage his expectations — and temper — is hilarious.

Key to Collaboration: A twisted sense of humor

Comic Con fans instantly recognize B-movie icon Campbell as the chainsaw-slinging, Deadite-fighting Ash Williams in Raimi’s Evil Dead trilogy. Campbell and Raimi have been on the same gory page since their boyhood days in Michigan. After teaming up as teens to crank out the horror short Within the Woods for $1,600, they followed with the over-the-top schlockfest, The Evil Dead. Critics hated the film, but it became a cult hit after Stephen King saw it at Cannes and endorsed it. “[That film] made people faint,” Campbell told Digital Spy, “and got a lot of bad reviews, so [Sam and I] thought let’s do something that’s more of our own sensibilities—a little more humor, a little more wackiness.” The result was the slasher-slapstick, Evil Dead 2. Raimi, who has had a far higher career profile than Campbell (who many know as Sam Axe in USA Network’s Burn Notice), gets a sick kick out of casting his buddy in cameos, including three different ones in his Spider-man trilogy. “He’s such a source of humor for me,” Raimi told ScreenRant.com. “I love working with the guy. He’s a great and really dedicated actor.”

Scene to see: What else? Ash cutting off his own hand with a chainsaw and replacing it with the tool itself in Evil Dead II. Gory, outrageous, absurd, funny, disturbing . . .  Classic Raimi and Campbell.

Though she has appeared in only three Coppola films (and one—The Bling Ring—in just a cameo as herself), Dunst is devoted to the director’s poetic sensibility. The outwardly wholesome actress says that Coppola frees her to express herself in ways others directors do not. “The thing I like most about Sofia Coppola is that she doesn’t see in me the gracious and exuberant blonde,” Dunst told the online journal Iwantobeacoppola.com, “but a young woman with her complexes, a sad side and sometimes also scared.” It’s clear Coppola knows Dunst inside and out. While discussing her debut feature, The Virgin Suicides, the director told Contactmusic.com that she cast the then 16-year-old as the seductive yet vulnerable Lux Lisbon because “‘[Kirsten’s] really a kid, but she’s also womanly.” The pair also bond over childhoods lived in the public eye: Dunst began acting in commercials at age three—around the same age Coppola first toddled on to her famous father’s sets.

Scene to see: Lux burning her records on orders from her mother (Kathleen Turner) in The Virgin Suicides. The anguish Dunst expresses as the characters destroys her beloved LPs is almost unbearably intimate.