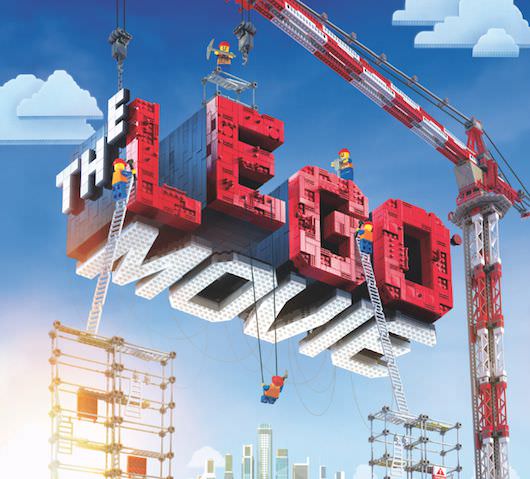 The Many Moving Parts to The LEGO Movie

The toys and games of our youth have long been fodder for filmmakers. There have been six films (all direct-to-video, it should be noted) made from Mattel’s ‘American Girls’ line. Dungeons & Dragons was made into a feature film in 2000 and starred Oscar winning actor Jeremy Irons. G.I. Joe has been called into duty twice, in 2009 and just this year, in monster big budget spectacles. Transformers have been clanging their multi-purpose parts together since 2007 in three films, with a fourth due in 2014. This is to say nothing of the animated films based on toys, from Barbie to Care Bears to My Little Pony. We’re not even lumping Pixar’s films into this group because they seem to warrant their own, special category. We’ve grown so used to our childhood entertainments being turned into motion pictures that barely anyone batted an eyelash when Battleship, perhaps the most analog game of all time (it began as a paper and pencil game during WWII, graduating to pegs on a glowing, talking electronic board by 1989) became a massive alien attack film that included the well known onscreen duo of Liam Neeson and Rihanna.

With all of that said, we’d be remiss if we didn’t admit that we're excited were The LEGO Movie. There has always been something special, and so sublimely simple, about the entire premise of Legos. They fit together, they can be turned into all sorts of wonderful shapes (as well as Star Wars X-Wings, the Bat Mobile, and the insane things on this list), and the Lego minifigures are undeniably adorable. And then came the trailers—witty, fun, charming and, dare we say, exciting? Those without kids, nieces, nephews and godchildren surely have friends with kids they can borrow for a day to go see this film.

So let’s take a peek at some of the people who helped build The LEGO Movie.

Directing team Phil Lord and Chris Miller  (21 Jump Street, Cloudy With a Chance of Meatballs 1 & 2) are working together again, having also wrote the screenplay, from a story by Dan Hageman & Kevin Hageman. Obviously coming up with a feature-length story for a children’s toy isn’t a new challenge, but it seems a touch easier for the likes of the Transformers and G.I. Joe, who were literally built with stories in mind (good guys, bad guys, good robots, bad robots). The writing team for Lego managed to come up with a compelling narrative, weaving in some known Lego characters (Lego Batman! Lego Superman! Lego Wonder Woman!) with new, less super but no less charming minifigures. Yet at first, even Lord and Miller were concerned about how to pull this off. “A movie based on a plastic brick?” Miller said to USA Today, "but we thought maybe there is a way to do an interesting story as crazy and random as the toy itself.”

The story they came up with, “sort of The Wizard of Oz meets The Matrix,” Lord told USA Today, has the hallmarks of a classic underdog story (a regular Lego minifigure, Emmet [voiced by Chris Pratt] is mistakenly believed to be the most extraordinary person in the known universe and is recruited as a potential savior), but is also infused with wit, irony, and the mayhem that comes with working with massively talented, and silly, comedians. Which brings us to Emmet’s antagonist, President Business (voiced by Will Ferrell), who’s lunatic alter ego, Lord Business, is intent on gluing the Lego universe together. It will be up to Emmet and his compatriots to vanquish Lord Business and maintain the free-form creativity that is so intrinsic to the Lego ethos (yes, we just used the word ‘intrinsic’ and ‘ethos’ while talking about Legos). Come on, admit it, a story about Lego minifigures teaming up to keep the world from being fused together is very clever and you know it.

Cinematographer Pablo Plaisted’s career began with Happy Feet, where he was a character animator, modeler, pre-visualization artist and senior animator. Here, he was tasked with making sure, despite what might seem like a limitless ability to do anything, retain a coherent visual narrative. Cinematographers who work in animation have it no easier than those that work in live action.

Production Designer Grant Freckelton has gone from a concept artist and matte painter on Moulin Rogue! to the visual effects art director for The Matrix Reloaded, a VFX designer on Harry Potter and the Goblet of Fire, and again the VFX director on 300. As the production designer on The LEGO Movie, Freckelton was responsible for the look and feel of Bricksburg, and the rest of the Lego universe.

Animation co-director Chris McKay, well known in the industry as a long-time director on the hilarious stop-motion animated show Robot Chicken, brings his expertise to a project which looks like stop-motion animation, but is really top notch CGI. McKay, speaking at Comic Con, said of The LEGO Movie, “we decided to make this the most bad ass thing we could do, we just went for it and tried to make something really cool.”

The Australian animation and visual effects company Animal Logic has had their hands in some of the most eye-popping film since their inception. They were involved in The Matrix (they helped design the matrix code itself, along with one hundred effects) Zack Synder’s 300 (they art directed the entire film as well as created every shot for an eight minute battle scene between the Spartans and the Persians) and Australia’s first digital animated featured, 2006’s Happy Feet. They also helped create the color-soaked, luridly beautiful New York of the roaring 20’s for Baz Luhrmann’s The Great Gatsby.

On December 20th Walking With Dinosaurs 3D will premiere, which Animal Logic secured after a six-month period of planning, testing and collaborating with Evergreen Films and BBC Earth. Promising to be an even more realistic romp amongst our long lost Late Cretaceous friends, centering on a curious scamp Patchi (a Pachyrhinosaurus), who grows into the leader of his herd. Collaborating with James Cameron’s 3D technology company Cameron Pace Group and their Fusion 3D system, Animal Logic and their team helped give Dinosaurs the same dimensional pop that Avatar and Transformers: Dark Side of the Moon had.

Now they’ve helped create the stop-motion-like computer graphics for The Lego Movie. The animation is as adorable as the real Lego characters were, while still being eye popping, and the combination of stop-motion like graphics with the vivid, lush CGI we now expect looks top notch.

-The iconic Danish company was created in 1958 and has made 568 billion parts since then.

-Lego got its name when founder Ole Kirk Christiansen took the first two letters of the Danish words Leg Godt, which means “play well.” He was unaware that Lego in Latin means “I put together.”

-It’s been calculated that there are over 915 million ways to combine six Lego bricks.

-If you laid the number of LEGO bricks sold in a year end to end, they would circle the world five times over.

-There have been approximately 4 billion minifigures made, making them the world’s largest population.