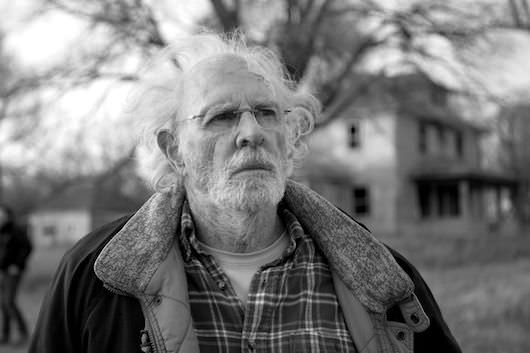 Alexander Payne first got Bob Nelson's script for Nebraska back in 2003 or 2004 (he isn’t quite sure). He liked it, and he immediately thought of Bruce Dern for the lead role, so he sent it to him. Dern liked it, and was surprised Payne had thought of him for the lead. Dern was so excited, in fact, he went to Toys R Us and bought a toy truck (a new truck has a lot of significance in the plot) and sent it to Payne, saying that he could do this role.

There was just one problem.

“I didn’t want to follow Sideways, a road trip movie, with another road trip movie, so they were all willing to wait,” Payne said at a press conference following Nebraska’s premiere at the Walter Reade Theater at the New York Film Festival. Dern and the rest of the people involved in that initial script handoff waited nearly a decade to make Nebraska, and if you’re read even a dozen articles in your life, then you know how this sentence ends…the wait was worth it.

Let’s go back in time for a second and link Alexander Payne’s first movie, Citizen Ruth, and his latest, Nebraska. They have two things in common—the protagonist is something of a mess, causing major concerns within their families about their well-being and their decision making, and both are played by Derns. The former was Laura Dern, who played Ruth Stoops, the drug-addicted pregnant woman who finds herself the subject of an intense abortion debate. The latter stars her father, the aforementioned Bruce Dern, as Woody Grant, an old man (and something of a drinker) who keeps attempting to walk to Nebraska (from Montana) to receive the million dollars he believes he’s won after receiving a bogus sweepstakes letter in the mail. Between two Derns (which we’re submitting to Zach Galifianakis as a spinoff to his popular web series of a near similar name), Payne’s made a string of singular, often hilarious, bittersweet features including Election (1999),  Sideways (2004), and The Descendants (2011), which earned him his second Academy Award for Best Adapted Screenplay.

Nebraska’s premiere here at the New York Film Festival was met with applause, laughter, and delight. Payne took the stage to applause, which spilled over into cheers and hollers once Bruce Dern and June Squibb [she plays Woody’s wife, Kate] joined him. Dern and Squibb gave two of the most honest, hilarious performances of the year, period. Will Forte joined, best known for Saturday Night Live and MacGruber, played David Grant, Woody’s son. Forte was game for the challenge of a more serious role, and nailed it.

The premise of Nebraska is actually very sad—a delusional old man desperately wants to believe he has won a million dollars. His desire (and constant wandering on the highway) is driving his wife, Kate, bonkers. Their other son, Russ (the always enjoyable Bob Odenkirk) agrees with his mom that it’s time to put the old man in a home. But David’s compassion for his father’s desire to have something, anything, to live for, wins out. He agrees to take him to Lincoln, Nebraska. Father and son set out south from Billings, Montana across a beautiful, often bleak stretch of America that is filmed in black and white by cinematographer Phedon Papamichael. When asked why he chose to film in black and white, and how it helps the storytelling, Payne said that it “just felt right.”

“From the moment I picked up the screenplay many years ago, I always saw the film in black and white. And how does it help storytelling? It’s just so darn beautiful. Everyday [Papamichael] and I would look each other and say, ‘How could we possibly go back to color?’ Not only that, it was my first Cinemascope picture. I had shot widescreen before, but only super 35. My first time using old Cinemascope lenses, and boy that was a treat, too.”

After an incident involving alcohol and the confusing confines of a dark motel room, David convinces Woody to make a pit stop in Hawthorne, Nebraska, Woody’s hometown, where his brother and extended family have welcomed them for the weekend. Kate and Ross Grant will eventually join them there, and as the real reason for Woody’s journey becomes clear, Nebraska offers one of the most hysterical family reunions in recent film history. 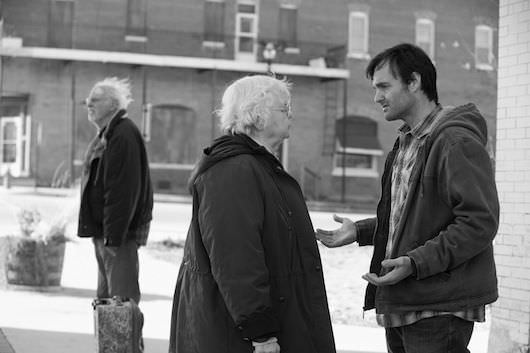 About June Squibb as Kate, let us put it simply—Kate Grant is one of the most delightful creations in any movie this year. Cantankerous and bitter, you worry this is a two-dimensional character built simply to badger the protagonist. But no, this is June Squibb and this is Alexander Payne, helped by a great script by Bob Nelson that is about more than easy characterization and laughs. Kate Grant is a force of nature, devilish and destructive but also deeply protective of her family. She got the biggest laughs in the theater, over and over again. It's a powerhouse performance, modulated against Dern's honest, taciturn, ultimately heartbreaking portrayal of Woody.

Forte and Odenkirk downplay their considerable comedic talent long enough to let the film settle in, but as everything (and everyone) converges on Hawthorne, and word is out on Woody's "millions," their innate comedic timing surfaces. While their every good intention yields more punishment, Forte and Odenkirk make you laugh without ever reminding you that they’re famously hilarious in real life—they remain, wonderfully, the two Grant boys, imperfect but, ultimately, loving. 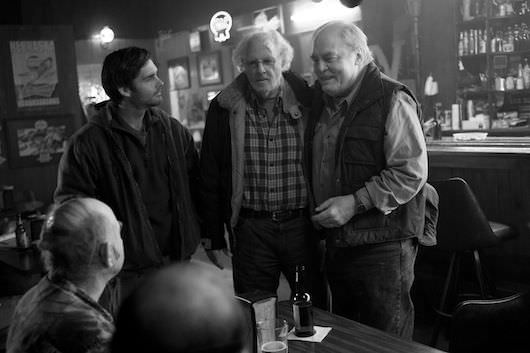 Stacy Keach, as always, turns the seemingly gregarious Ed Pegram, an old friend of Woody's, into a barely coiled mass of manipulation and potential malice. There is a running sub plot about Woody having lent Ed Pegram an air compressor that he never returned that grows in significance, and that would be criminal to say any more about. The film is packed with small delights like this, plus fantastic shots (Dern described a friend of his watching the movie and saying it “It’s like watching a movie scrapbook of Ansel Adams photographs”), and emotions that feel real, earned, and grounded in reality. It could even be seen as a comment on our current economic predicament, and the rapidly dissolving middle class, but that might be foisting politics onto what is, essentially, a beautifully calibrated film about family.

As fantastic as the ensemble cast is (the actors and non-actors alike who round out the extended Grant brood in Hawthorne are, to a man and woman, very funny), this is Dern’s movie. There is never a moment of sentimentality or falseness—this is an old man who has made his choices, many of them bad, but as the film builds to its climax you sense there’s something more primal, something real burning there as he drives everyone crazy with his quixotic quest. Yet Dern gave all the credit to his director.

“Well, I think not only after this movie but after his first movie, Citizen Ruth, there’s not an actor alive who doesn’t want to work with Alexander Payne…the excitement for all of us about the movie is him (pointing at Payne), and that doesn’t get said enough in what’s going in the last eight months of this movie. He is a privilege to work for and to work with. You hear actors say a lot of times, ‘I like to work with this one, I like to work with that one,’…no. He’s a guy who insists you work with him, and he is so approachable, and so natural, and so insistent on reality, and being honest, he surrounds you, every other scene, with two or three non actors who are so goddam honest you can’t possibly start acting or performing in front of these people. And that’s magic.”

And this is when Will Forte reminded the audience of his vast training in comedic timing—he waited, leaned slowly into his microphone, and said, “I’d would like to stop being referred to as a non-actor.”

The audience erupted in laughter. It wasn’t the first time, or even the tenth.