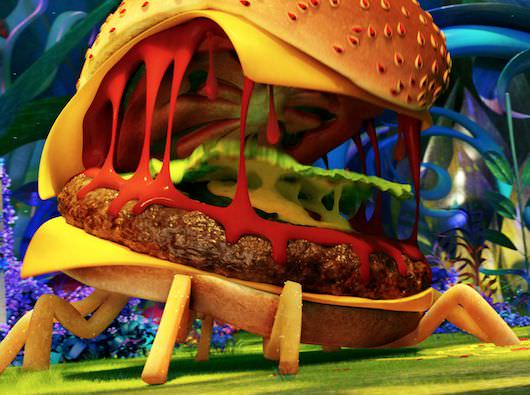 Cloudy With a Chance of Meatballs 2 & 7 Delicious Food Films

You might find it odd to begin a brief glimpse into some amazing films about, or crucially influenced by, food by starting with an animated film for children. But you’d be forgetting that one of the great food films of this age, or any other, was Pixar’s Ratatouille.

Sony Pictures' Cloudy With a Chance of Meatballs 2 premise is almost The Island of Dr. Moreau-esque—inventor Flint Lockwood (Bill Hader) finds out that his infamous water-into-food invention survived his attempt to destroy it, and it’s been churning out dangerous food-animals (foodimals) that he must now do battle with. The production notes for the film offer this undeniably hilarious sentence (if I were a kid, this would be more than enough for me to force one of my parents to buy us tickets): “Flint and his friends embark on a dangerously delicious mission to battle hungry tacodiles, shrimpanzees, hippotatmuses, cheespiders and other foodimals to save the world—again!” The reviews have been positive.

This got us thinking about all the representations of food in film, and how a lot of classic films are centered on, or about, food. So here’s a brief culinary tour of some of the best food films that you might not have heard of, or perhaps haven't seen in a long time.

A premise as seemingly sweet as the bakery setting itself, Eric Rohmer’s story of a man stuffing himself with sugar cookies and pastries day after day so he can be near the pretty girl in a Paris bakery is a lot more complex than that, and at only 22-minutes long, it packs a surprising punch. The young man (Barbet Schroeder) has more than just the pretty bakery girl Jacqueline (Claudine Soubrier) in mind—he saw a tall, beautiful blonde woman (Michéle Girardon) in the street near the bakery and instantly fell for her, but lost her and hasn't seen her since. He's been cooling his heels inside the bakery, where Jacqueline has caught his attention—for now. With every visit, the young man increases the number of cakes and pastries he buys and eats in an food-centric erotic ritual. Shot in black and white with a nimble 16mm camera and non-professional actors, Bakery Girl is part of Rohmer’s ‘Six Moral Tales’ series, which consisted of two shorts and four feature films. When the tall blonde woman reappears, Rohmer’s film turns again and leaves both the bakery girl, and the viewer, with a bitter, but rich, aftertaste.

Willy Wonka and the Chocolate Factory (1971)

Another classic centered on sweets, only there may not be another food film in the medium’s history is as shot-through with dread as Willy Wonka and the Chocolate Factory (okay, Soylent Green probably is). Directed by Victor Fleming, and based on Roald Dahl’s classic book Charlie and the Chocolate Factory, everything about Wonka’s lunatic sweets factory is a mixture of the delicious and dangerous. Seeing Augustus Gloop fall into the chocolate river and get sucked up into the pipe was, through a child's eyes, shocking. And then each successive child's greed and hubris led to every single one of them save Charlie coming to some horrible end, well, it was an early lesson in the embedded darkness in many of the greatest “children’s” movies.

What food film list would be complete without Louis Malle’s unique and utterly captivating film? Written by and starring Wallace Shawn and Andre Gregory, the film centers on a meal between the two friends (playing versions of themselves, actor and playwright 'Wally Shawn' and theater director 'Andre Gregory') who spend the entirety of the film at an Upper West Side restaurant, talking. Topics include money, love, death, and life itself. On paper the film sounds like a thesis project gone awry—in reality it's a moving and groundbreaking film, infused with passion and intelligence from the two leads and from Malle’s fantastically elegant filmmaking style. My Dinner With Andre honors the very best that a good meal can offer—connection, compassion, and, if you’re with the right person and have some good food, a level of contentment hard to find elsewhere in life.

Directed by Gabriel Axel and adapted from a story by Isak Dinesen (Karen Blixen), this film connects food to artistic creation and divine grace in stunning fashion. The story centers on a French housekeeper with a mysterious past who crafts a meal so beautiful it triggers a kind of spiritual and emotional revolution in the pious Danish villagers she prepares it for. Set in 19th century Denmark, Babette's Feast transitions gradually from muted tones of white and gray to a more vibrant palette as the dishes are prepared. This film is a food-lover’s proof that the one of the best ways to inspire change is through the stomach.

Why should you see Juzo Itami’s film about the Ahab-ian monomaniacal search for the perfect Japanese noodle? Let the late, great Roger Ebert explain: “Consider, for example, the tour de force of a scene near the beginning of the movie, where a noodle master explains the correct ritual for eating a bowl of noodle soup. He explains every ingredient. How to cut it, how to cook it, how to address it, how to think of it, how to regard it, how to approach it, how to smell it, how to eat it, how to thank it, how to remember it. It's a kind of gastronomic religion, and director Juzo Itami creates a scene that makes noodles in this movie more interesting than sex and violence in many another.”

This aforementioned marvel of animation is, simply put, one of the great animated films of all time, and, a fantastic addition to the food film canon. Director Brad Bird’s film about Remy (Paton Oswalt), the food-loving rat who sets out to become a proper French chef in Paris, is almost as perfect as the titular dish that Remy creates for the miserly food critic Anton Ego (Peter O’Toole). What kind of wild magic is at hand when an animated movie makes you hungry in real life? As Remy and his pal Linguini (Lou Romano) collude to create magnificent dishes for their struggling, beloved restaurant Gusteau’s, the film dives into questions about honoring our passions, family, and, of course, the transformative pleasure of a great meal—one that can take you back to a home you left long ago.

Hirokazu Kore-eda’s lyrical portrait of a family (a tribute to his late mother) depicts a single day in the life of the Yokoyamas. Focusing on the smaller, intimate moments of every day life, including, and most splendidly, a family eating together, Still Walking captures the joy, love, and sadness embedded in the story of every family. As the Yokoyamas welcome home children and grandchildren, the movie feels, as so many reviewers have described it, as "lived in." Take this scene, for example, when the matriarch of the family plays a favorite song—nothing flashy here, just a family having dinner while an old Japanese pop song plays on the record player—and yet, why does it feel so alive?