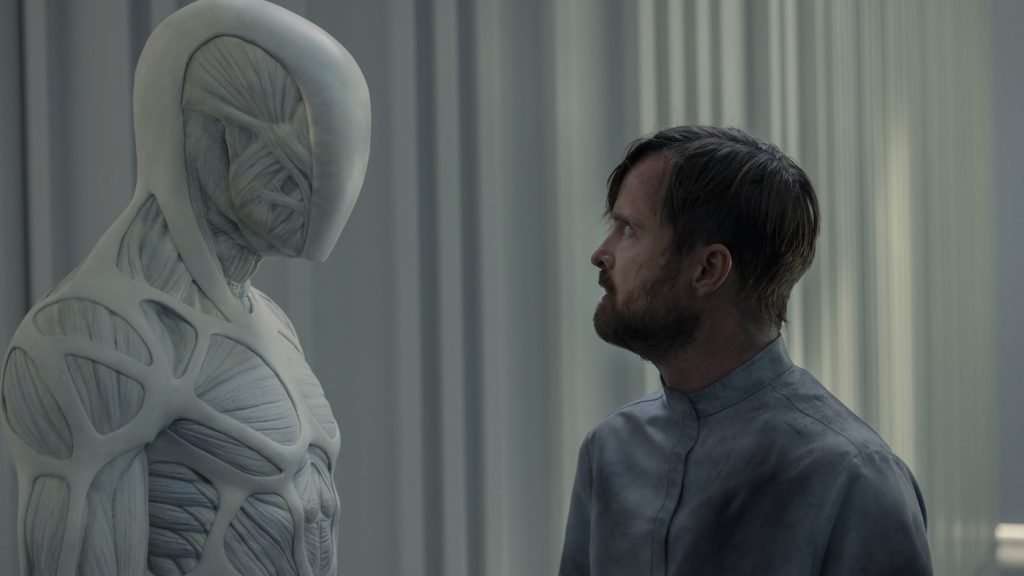 As we’ve done for the past few summers, we’ve compiled a few of our favorite interviews to highlight in this last week of August. This is by no means a comprehensive list, but a little taste of some of the great conversations we’ve had during these hot summer months. Bring on sweater season.

Every season of Westworld is an ambitious undertaking, requiring hundreds of talented artists to create HBO’s gorgeously wrought sci-fi puzzle box. Season 4 has been especially complex, owing to the fact that the line between “real” and synthetic, between host and human, has been blurred to the vanishing point. Season one’s western-themed rebellion story, in which the synthetic hosts of the titular park eventually rebelled against their human abusers, is now a distant memory as some of those hosts wield enormous power and control over their human subjects in the real world.

Keeping up with who’s human and who’s a host is one of season four’s twisted delights. Dolores (Evan Rachel Wood) is living a quiet life as a corporate writer named Christina at Olympiad Entertainment, writing stories for the non-player characters in video games, haunted by intimations of some larger truth she can’t quite grasp. Maeve (Thandiwe Newton) and Caleb (Aaron Paul) are on the move together after surviving assassination attempts at the behest of William (Ed Haris), looking to unpuzzle their reality’s mysteries. Meanwhile, Charlotte (Tessa Thompson), who is actually a rogue copy of Dolores, has been replacing U.S. government officials with host copies in her ongoing effort to create a new world order.

These are but a few plot points in a remarkably intricate season, but one through-line you’ll notice throughout Westworld season 4 is the idea of copies—hosts made in the image of a particular human with the express purpose of taking over without alerting the rest of the world. To that end, we spoke with special makeup effects designer Jason Collins and special makeup effects design department head Jennifer Aspinall about what it took to create body doubles of Westworld‘s cast (and more).

When you get the script for an episode, are you breaking it down into the pieces you’ll need to create?

Collins: It’s funny because that’s where Jen and I shine. I break the script down from a design perspective and what we’re making, while Jen breaks the script down for planning, and then we sit down and talk together and decide what needs to be made, what the approach is, what the design aesthetic will be, and then we go through and hit it all from a unified front. The show creators are sculpting in real-time, which means they’re always crafting the scripts to the last minute. Even into editing, they’re moving around the chess pieces and sculpting with live clay as they go, so you have to be on your feet and know that things are going to change because this is Westworld, it’s world-building.

Aspinall: We’re blessed enough to get the scripts a little bit ahead of time. The variable is that what we break down in the initial script does change by the time we get to shoot it. By the time it gets to a production meeting, it could be a completely different script.

Collins: Westworld isn’t a show like any other; it’s not like you can go to the cabinet of ideas and pull one out. It’s a multi-layered show, and you have to think about what came before and what came later, and that affects design. Westworld is a very design-heavy show.

Let’s discuss the aesthetics of Westworld, which have remained remarkably consistent and consistently gorgeous, so much so that it’s sometimes hard to decipher what’s a practical effect and what’s the work of visual effects artists.

Aspinall: That’s one of the things that’s special about this show. It’s shot on film, so it has film quality, which makes it very beautiful. And these are all top-level designers; it’s so inspiring to go to work with these people because everyone in the room is at the top of their game. This year, we had to create dummies, or copies, of a lot of our actors, and that’s something you as a viewer aren’t going to know whether we created it or if it’s just the actor. I think this show is a great marriage of practical and visual effects.

Collins: There’s so much the VFX artists have to do, not just from an effects standpoint, but a world-building standpoint, so anytime you can give visual effects the assets to build on or handle the effect completely in camera, it’s one less thing for them to do. The show is so vast and expansive. Jay Worth, the VFX supervisor on the show, he’s incredible. I think if I had his position, I’d be freaked out every day. Like the episode when a synthetic version of Caleb’s daughter’s head opens up [episode 3], that’s completely a VFX shot. I was excited when I read it because I thought we’d build it, but Westworld had already established that in the first season. But you get plenty of other opportunities.

This season of Westworld introduces a new park, Temperance, that is a recreation of 1920s-era Chicago, but there are resonances to the original western-themed park. How much fun was it to play with those echoes from the first season?

Collins: What I thought was fun was we got to re-envision these knockoff characters. At the Butterfly Club in Temperance, it’s the same story beats as there were at the Mariposa [in the previous Westworld park]; you get to re-envision those characters, but as cheap knockoffs. They kind of look like them, like with Hector and his scar and with Artemis and her face tattoo. In the first season, she had a snake tattoo; in this season, she still has it, but it’s an Art Deco snake. We had fun with a lot of that stuff, it’s a nod to the people who have really stuck with the show.

There are a lot of duplicates of the Westworld cast in season 4, from Ed Harris’s William early on in the season to some big reveals throughout. How do you build those body doubles?

Aspinall: We took the duplication of the actors to another level this year. Jason and his shop did an amazing job. I’ve been doing this for 45 years, and I’ve watched the technology transition to something that is so lifelike it’s breathing in the space with you. I find that beautiful as an artist.

Collins: A lot of the actors you can’t get in for a full live cast due to their schedules. Take Ed Harris, for example. Ed’s on the show all the time, so what we did is we asked visual effects if they’d done a scan of him in the past, and they had. We then take that scan, clean it in a Z-brush application, then print out his head out and do another mold on it. We do a clay pour, we add the details, nuances, the little things that Ed has that maybe the average viewer wouldn’t see, but you see it in their totality, their essence. That’s what is really difficult in these body doubles, you want to find the essence of the actor. You can be technically right on the money to the exact measurement and skin tone of a person, but if you don’t have their essence, like the way they hold their head, or there’s a slight asymmetry in the eyes, you don’t know what you’re looking at, but you feel it. And those are the really important nuances that we as artists have to capture.

Collins: Sometimes it goes against your better judgment because it’s not technically clean, but none of us are perfectly symmetrical. Those are the things we really have to focus on so the camera can find that allure that makes the real actor appealing to the audience. In episode 2, when they’re freezing Ed, that’s a body double in there because we can’t have a real person in there when they’re shooting the CO2, and they were able to park the camera on Ed’s head, and most people couldn’t tell that was a dummy.

Aspinall: That was a magical moment for us. The visual of Ed in that chamber and then the visual of our dummy in there was stunning. And it really worked.

What are the dummies made out of?

Collins: We create a master mold, and then we cast it in silicone. Most of what we’re creating are hosts, so there’s the pearl husk that goes inside of the head. That pearl husk opens up, and there’s the cradle where the pearl sits, and all of those things have to be there on our host dummies. That’s speaking to that cool aesthetic design of the show; there are rules to Westworld when you’re designing it, the aesthetic has been set up, and you have to follow through with those things. Even when you open up the head and see the pearl sitting in the husk, there’s nothing to change there because it looks perfect, like something you’d get at an Apple store.

Aspinall: We then do the hair punching, which is an art form of its own. You’re trying to find the natural hair pattern of someone’s beard or hairline, and it’s a detail we have to nail. Hair can be over-punched or applied, and things sometimes need to be removed because what you see on camera isn’t what’s always in real life. You have to adjust our fake stuff as if it has eyebrow makeup on, for example. Sometimes we have to style the dummy, then do the makeup on top of the dummy, so it matches the character. The eyebrows are always a tricky thing. You can’t duplicate it from a photo because that’s a two-dimensional image, and you’re making a three-dimensional thing, so it’s about looking at where the planes of the face are as opposed to just the shapes. I love doing that work.

Collins: I love working on the show with you, Jen, because you’re my second set of eyes. I can present designs to you and say, ‘I think this is good?’, but then you can look at it and help tweak it. That’s the lovely part of being able to do a show with a friend.

Aspinall: We’ve got trust and respect.

Westworld season 4 is currently streaming on HBO and HBO Max.