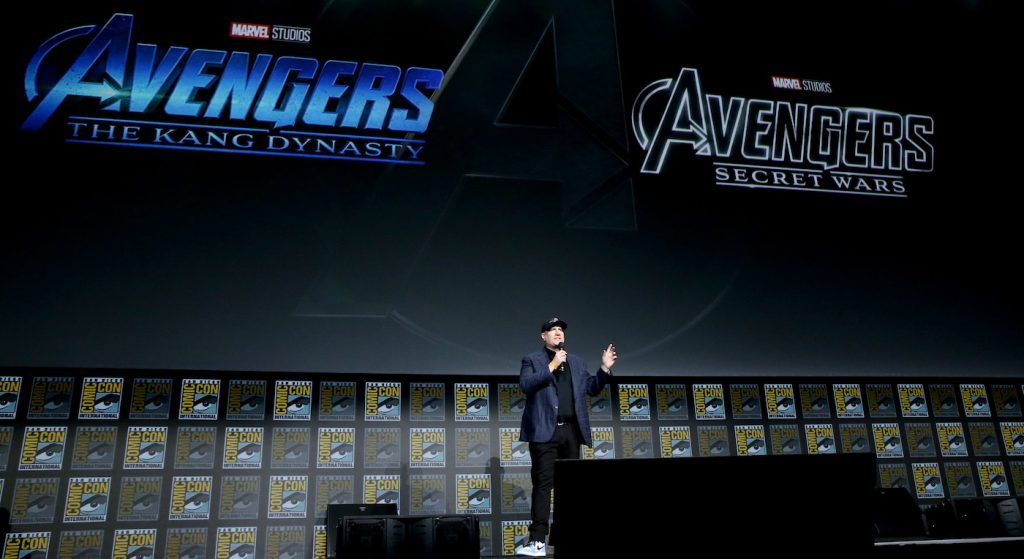 Still buzzing from that Black Panther: Wakanda Forever trailer? Us, too. Yet Marvel had more to share during their time in Comic-Con’s Hall H. Three years after Marvel Studios chief Kevin Feige unveiled the plans for Phase 4 there, he was back to discuss Phase 5 and even hint at what’s in store in Phase 6.

Before we can get to Phase 5 and 6, however, we need a glimpse of what’s left in Phase 4.

Phase 4 carries on in just a few weeks with the August 17 release of She-Hulk: Attorney at Law on Disney+, which stars Tatiana Maslany as Jennifer Walters (she’s Bruce Banner’s cousin, folks), who reps superheroes in need of a smart lawyer who also happens to be capable of deadlifting a thousand pounds (or more) when she’s green.

Up next is arguably Marvel’s most anticipated film of the year, Ryan Coolger’s Black Panther: Wakanda Forever, which carries on without Chadwick Boseman, who tragically passed away in August 2020. Wakanda Forever arrives in theaters on November 11 and will feature Namor the Sub-Mariner (Tenoch Huerta) as the main villain. Namor will be arriving in a Wakanda still reeling from the loss of its king. Wakanda Forever officially concludes Phase 4.

What better way to kick off Phase 5 than with the quantum realm-messing hijinx of Ant-Man and the Wasp: Quantumania, which arrives on February 17, 2023. Quantumania will find Jonathan Majors reprising his role of Kang the Conquerer from Loki after he runs into Scott Lang (Paul Rudd) and his daughter Cassie Lang (Kathryn Newton), as well as Hope van Dyne (Evangeline Lilly), Hank Pym (Michael Douglas), and Janet van Dyne (Michelle Pfeiffer) in the quantum realm. Majors has a major role to play in how the MCU will be shaped going forward, as you’ll see when we get to Phase 6.

Secret Invasion is up next, premiering in the spring of 2023 on Disney+. The series finds Nick Fury (Samuel L. Jackson) and his frenemy Talos (Ben Mendelsohn) teaming up after their adventures in Captain Marvel and also features Maria Hill (Cobie Smulders), James Rhodes (Don Cheadle), and Everett K. Ross (Martin Freeman). Newcomers include Kingsley Ben-Adir, Olivia Colman, and Emilia Clarke.

Writer/director James Gunn was in San Diego to hype Guardians of the Galaxy Vol. 3, due on May 5, 2023. Footage revealed that Vol. 3 would feature our first look at how Rocket (Bradley Cooper) became the walking, talking raccoon we all know and love. Joining franchise regulars Chris Pratt, Karen Gillan, Zoe Saldana, Dave Bautista, Vin Diesel, and more are Will Poulter as Adam Warlock and Chukwudi Iwuji, from Gunn’s Peacemaker, who will play the High Evolutionary.

Echo arrives on Disney+ in the summer of 2023 and carries on the story of Hawkeye antagonist Maya Lopez (Alaqua Cox), with guest appearances expected from Charlie Cox’s Matt Murdock/Daredevil and Vince D’Onofio’s Wilson Fisk/Kingpin.

Also arriving in the summer of 2023 is season two of Loki, which wasn’t part of Marvel’s big presentation at Hall H.

Blade is one of the most anticipated films in Marvel’s entire Phase 5, due in theaters on November 3, 2023. Mahershala Ali plays the titular vampire hunter, with Bassam Tariq directing.

Up next is the Disney+ series Ironheart, due in the Fall of 2023. Here we’ll be reintroduced to a character we’re about to meet in Black Panther: Wakanda Forever, the brilliant inventor Riri Williams (Dominique Thorne). Sam Bailey and Angela Barnes will direct from scripts led by head writer Chinaka Hodge.

Everyone’s favorite lunatic is back in Agatha: Coven of Chaos on Disney+ in the winter of 2023/2024. Kathryn Hahn reprises her WandaVision role as Agatha Harkness and comes from that brilliant series’ head writer Jac Schaeffer.

In the spring of 2024, Daredevil: Born Again will continue Phase 5, with Charlie Cox’s Matt Murdock/Daredevil now becoming a full member of the MCU with a brand new Disney+ series. Also, Born Again has a—wait for it—18-episode first season. Cox had a fun cameo in Spider-Man: No Way Home, while Daredevil‘s big bad, Kingpin (Vincent D’Onofrio), had an important role in Hawkeye.

Captain America: New World Order arrives on May 3, 2024. Sam Wilson (Anthony Mackie) has now officially taken on the mantle of Captain America after a long, torturous road in The Falcon and the Winter Soldier, but Feige revealed little more than the title in Hall H.

Thunderbolts officially ends Phase 5 on July 25, 2024, and features a bunch of MCU bad boys and girls teaming up to do some good. While Feige didn’t reveal the cast, there are plenty of options, including Florence Pugh’s Yelena Belova, Daniel Brühl’s Baron Zemo, Hannah John-Kamens Ghost, Olga Kurylenko’s Taskmaster, and Wyatt Russell’s John Walker.

Feige revealed three major titles slated for Phase 6. The first is Fantastic Four, which is slated for a November 8, 2024 release, and will see the resurrection of that supergroup. The second is Avengers: The Kang Dynasty, set to hit theaters on May 2, 2025, and will be the first part of a two-part Avengers epic (think Infinity War and Endgame) with Jonathan Majors’ Kang the Conquerer featuring heavily. The third is Avengers: Secret Wars, which will actually end Phase 6 on November 7, 2025. There are a lot of ways Marvel could go with this film, either borrowing from a Marvel comics series that began in 2015 and featured the destruction of two worlds and the surviving variants of Marvel characters living in a hellscape known as Battleworld or, the mid-1980s “Secret Wars” series that inspired it.