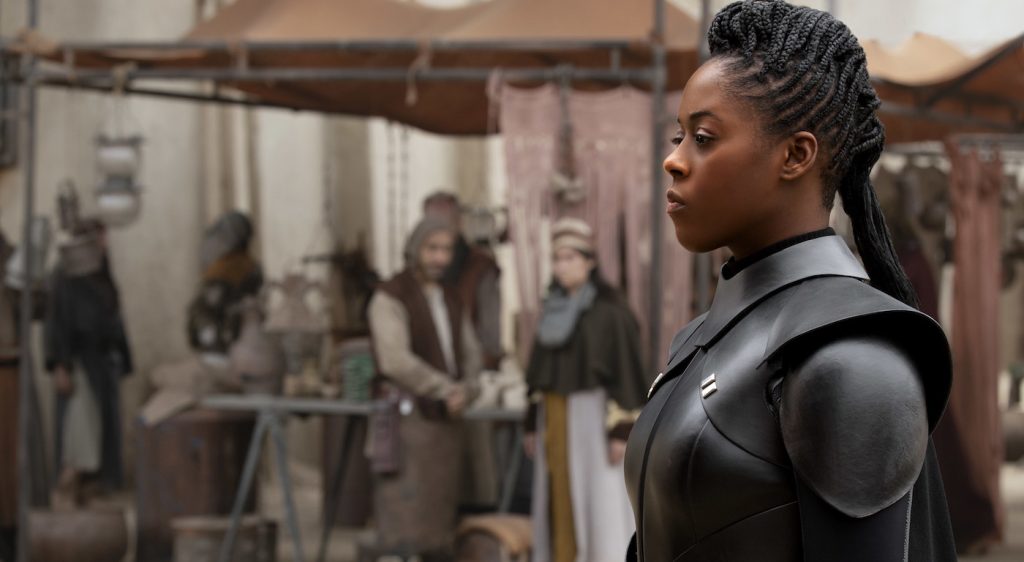 You might recall back in 2017 when Star Wars: The Last Jedi premiered and some Star Wars “fans” began bullying Kelly Marie Train, one of the film’s stars, often using horrific language. “I won’t be marginalized by online harassment,” Tran wrote shortly thereafter, in an essay for The New York Times. “It wasn’t their words, it’s that I started to believe them. Their words seemed to confirm what growing up as a woman and a person of color already taught me: that I belonged in margins and spaces, valid only as a minor character in their lives and stories.”

Sadly, history is repeating itself, with current Obi-Wan Kenobi star Moses Ingram, a sensational talent whose breakout performance in Netflix’s The Queen’s Gambit got the attention of casting directors everywhere, is now on the receiving end of racist invective being spewed at her on social media.

In Obi-Wan Kenobi, the new live-action Star Wars series on Disney+, Ingram plays the crucial character of Reva Sevander, aka the Third Sister, who is on a mission to track down Obi-Wan (Ewan McGregor) for Darth Vader. In what should be a moment of joy, with Obi-Wan making a massive splash with its Disney+ premiere on Friday, May 27, it has instead turned into yet another example of emotionally stunted, racist cowards bullying a star online. Here’s what Ingram shared on her Instagram account:

“There’s nothing anybody can do about this. There’s nothing anybody can do to stop this hate. I question my purpose in even being here in front of you saying that this is happening. I don’t really know. The thing that bothers me is this feeling inside of myself, that no one has told me, but this feeling that I have to shut up and take it, that I have to grin and bear it. And I’m not built like that. So, I wanted to come on and say thank you to the people who show up for me in the comments and the places that I’m not going to put myself. And to the rest of y’all, y’all weird.”

The official Star Wars Instagram and Twitter accounts responded with this statement in support of Ingram on Monday night:

We are proud to welcome Moses Ingram to the Star Wars family and excited for Reva’s story to unfold. If anyone intends to make her feel in any way unwelcome, we have only one thing to say: we resist. pic.twitter.com/lZW0yvseBk

This message was then followed by Ewan McGregor’s response, which was posted to the official Star Wars Twitter account, which included this sentiment: “I just want to say as the lead actor in the series, as the executive producer on the series, that we stand with Moses. We love Moses. And if you’re sending her bullying messages, you’re no Star Wars fan in my mind. There’s no place for racism in this world. And I totally stand with Moses.”

Others rushed to Ingram’s defense, including Star Trek: Strange New Worlds star Anson Mount, who posted a message of support on Instagram on Tuesday that included this: “This is Moses Ingram. She is a singular talent and a recent addition to the @starwars universe. She has also been targeted by racists pretending to be fans because her mere existence threatens a skewed, dystopian fantasy that selectively omits the likes of @therealbillydee and others. We, the Trek Family, have her back.”

The immediate response to these so-called racist “fans” who use a series or film’s casting choices as yet another occasion to vent their toxic worldview is heartening, but it’s hard to watch it happen over and over again. What to make of the kind of person who believes that Star Wars should exist, much like their preferred version of the United States or even the world, as a place of white racial hegemony? Nothing much, one could argue, yet they’ve managed to darken what should be a beautiful moment for Ingram. Obi-Wan Kenobi is the most-watched Disney+ series premiere ever, and Ingram, a rising star and integral part of the show, should be allowed to enjoy its success, not defend herself from racists who, if they existed within an actual Star Wars galaxy, would be stooges of a dying Empire, too dim and dull to even appear onscreen.