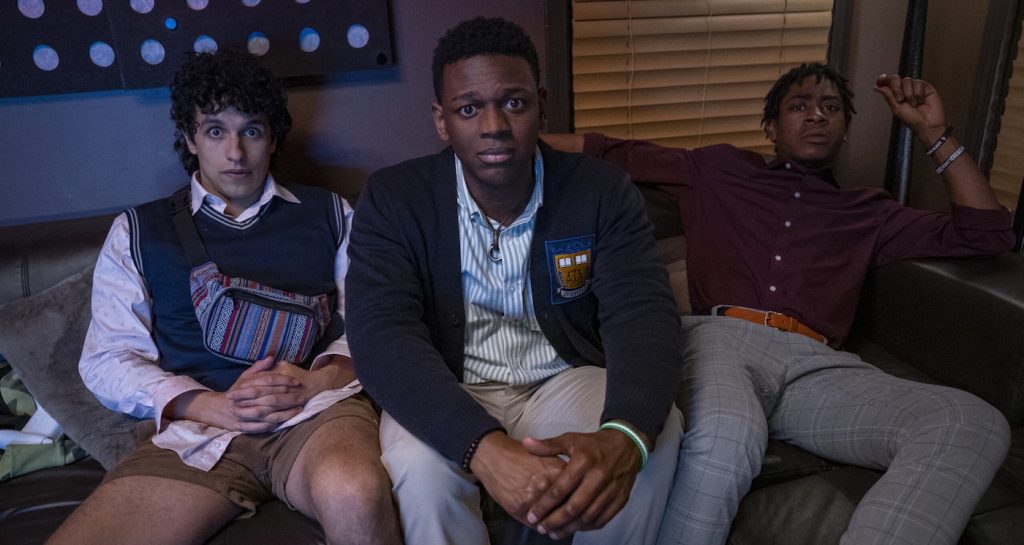 Carey Williams’s new film Emergency (premiering in theaters on May 20 and Amazon Prime Video on May 27) is billed as a comedy-thriller. But when college students Kunle (Donald Elise Watkins) and Sean (RJ Cyler), who are Black, and their buddy Carlos (Sebastian Chacon), who is Latino, find a drunk white girl they’ve never seen before passed out on the floor of their campus housing, it feels like Emergency is about to transform into straight horror. As the boys try to figure out who this girl is, how she ended up in their house, and what the right course of action might be to keep both her and themselves safe, their elaborate Saturday night party plans give way to frustration and terror.

While the boys barely make it off campus and through the night over the course of the movie, Emergency covers vast ground. Kunle and Sean are unlikely best friends — Kunle is a budding scientist more preoccupied with his lab cultures than the realities of racism in the U.S., while Sean, a lackadaisical student, sees the world around him for what it is. Through their friendship and their mismatched efforts to deal with a drunk stranger without ending up in the hands of the police, Emergency presents both a convincing portrayal of the horrors of U.S. policing as well as the sometimes sheer idiocy of 20-year-olds (which extends to and is perhaps best encapsulated by Maddie, the drunk girl’s equally incompetent sister, played by Sabrina Carpenter). In lighter moments, the film alights on the touchstones of American campus culture – silly costume parties, dumb frat guys, that crazy vibe shift where everyone listens to techno now.

For composer René G. Boscio, relevant found sounds from the boys’ environment, from vape sticks to the shaking of a ping pong ball in a Solo cup, helped make the score, which is spare, creepy, and designed to perfectly convey the precarity and danger of the situation in which Kunle, Sean, and Carlos find themselves. We had the chance to speak with Boscio about how his unique approach to composition worked to support the characters’ journeys which, despite taking place in the course of a single night, changes all their lives forever.

What was the jumping-off point for creating the film’s score?

I think between the conversations that Carey and I had, we established early on that the music’s role was going to be to support the tension and the suspense as well as some of the emotional beats that happen later on, and to stay out of the comedy. We didn’t want music to be trying to be funny. We felt that the performances and writing already delivered on that. So it was really more about trying to find subtle ways to support that tension. We made very strategic choices as to where the score should come in and what it should start emphasizing. The first time we actually hear score is once they start debating whether or not they should call the cops. I feel like that’s when the tension and premise of the film really takes off.

This is a thriller, but it’s not over the top. Did you have to exercise a lot of restraint in the score?

One hundred percent. I’m the type of composer who likes just pouring out everything inside. There’s kind of a sculpture, and I start chipping away and stripping things out until I feel like, all right, this is a nuanced and well-balanced area we’ve gotten to. Carey’s also a very subtle filmmaker when it comes to music and score, in particular, so we always wanted the score to be something that you felt and not so much heard. We didn’t want it to be too musical until the third act when things really pick up. That’s also when the score is given the chance to blossom more, but before that point, we wanted there to be this tension build-up that was restrained, and then it starts leaking as tensions escalate. And then it just blows up.

Can you explain how non-instruments worked for scoring the film?

We didn’t want the score to be too musical. We felt like using traditional instruments right off the bat was going to be going against what we wanted to do. So I experimented a lot with using sounds that were already built into the environment of the film, like sounds from the forest or sounds from [the boys’] apartment, like radiator heater sounds that I turned into drones. I invented this Solo cup and ping pong balls concoction that I would then rotate almost like a rainstick, and then make drones out of that as well. And then this other instrument with metal rods, it’s just a box with metal rods that have a contact microphone pickup — you just hit it and it makes a sound. That, processed and manipulated, became this kind of thump that started when they debate whether to call the cops, and it became this incessant thumping that was representative of what was coming, and something that no matter how much you tried to avoid was just inevitable. I loved that it looked almost like prison bars. I also thought, this could be interesting, just more from a source of inspiration and metaphor.

Later on, there’s a pivotal moment where we decided to do a vocal cue. I had been sneaking in some vocal parts but there comes a time in the film, it’s the climax of the movie, where you have this very intimate moment with one of our main characters and he’s forced to grow up right on the spot and open his eyes to this world that’s he’s been in denial of previously. Right off the bat, Carey wanted it to be a vocal cue. He wanted it to feel very grounded and like this was something that was carried on from generations. I wanted it also to feel, because of that, like a hymn or a lullaby. We’d seen earlier on Kunle’s relationship with his mom, and I wanted it to feel like those moments when, especially at that age when you’re faced with this dire situation for the first time in your life, the instinct is to want to feel like you’re not alone in it. Even though the vocal cue is like the rest of the score — very sparse and starts building very slowly within itself — I wanted it to feel like even though there’s this catharsis, that even though it’s this painful growing moment, that he wasn’t alone in it, in the sense that this has been happening.

How did you pick and choose when to use more traditional instruments?

Once we get into the forest, in particular, we knew that from that point onward, we wanted it to be a shift in perspective altogether. From that point on, we knew we wanted the music to feel a little more traditional but not extremely traditional. Since I don’t like just throwing things randomly in a place, I like sneaking them in beforehand, once the [group] starts going into the forest, I started using pianos, but in reverse. I would play a cue but it would swell, instead of a natural-sounding piano where you hit it and the sound decays. The further we get into the last part of the film, the strings become more prominent as well. But those traditional instruments didn’t come until the later part of the film because we wanted to establish that distinction, that first there was all this suspense and tension building up, then there’s a pivotal, cathartic moment, and then it’s a new thing, a new perspective on life, so to speak.