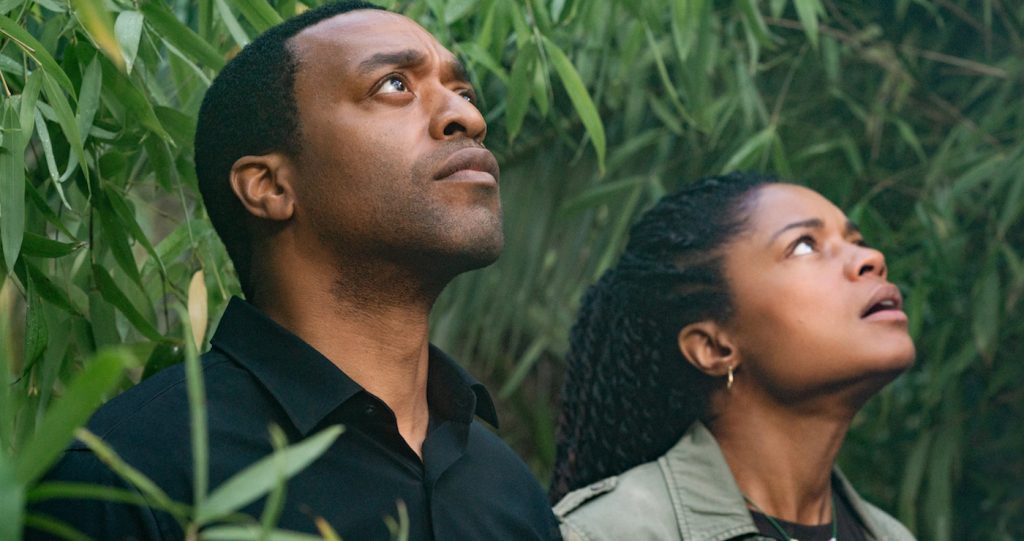 The new Showtime limited series The Man Who Fell to Earth is inspired by the 1963 novel and subsequent 1976 cult classic of the same name. Highly anticipated, it is created by award-winners Jenny Lumet and Alex Kurtzman, of Star Trek Discovery and Strange New Worlds. In this story, Chiwetel Ejiofor stars as an alien called Faraday on an urgent mission to save his homeworld. He tracks down genius scientist Justin Falls (Naomie Harris) who somehow holds part of the secret to saving both his world and ours. Justin has to balance her responsibilities to her daughter Molly and dying father Josiah with the demanding and bizarre requests of this mysterious stranger. Can she believe him, and can she believe in herself enough to do what Faraday asks of her?

The Credits sat down to chat with Jenny Lumet, who won awards for the screenplay of the Jonathan Demme film Rachel Getting Married before joining Star Trek: Discovery as consulting producer, being promoted to co-executive producer, and subsequently signing an overall deal with CBS Studios. Most recently, she has joined with a writing partner to establish 25 Stories, a new label at CBS Studios that will develop and amplify voices of color.

Lumet discusses Chiwetel Ejiofor’s extraordinary work ethic and inspired performance and the importance of having a strong Black female lead character. She also shares why The Man Who Fell to Earth is timely and universal enough to resonate in this moment, and in what ways it was, in retrospect, a very personal story for her.

You and Alex took some time to write the story of this new incarnation. How did you morph the original into what we see onscreen, and what were some of the best changes that made the series click into place?

This series takes place 45 years after the first The Man Who Fell to Earth, Walter Tevis’s novel (published in 1963), and Nicholas Roeg’s 1976 movie. We’re huge fans. Walter Tevis’s novel made me cry a couple of times. [Roeg]’s film was a wonderful movie that was very much of its time. In both that book and that movie, in a very beautiful way, the character of Thomas Jerome Newton, played by David Bowie, who is the protagonist of the Tevis novel, is oddly passive.

Yes, a cipher. We knew that when you’re in this novel space, or if you’re in that of-the-moment screen space with Nicholas Roeg’s movies, you can do that. We knew for television that we had to have an engine. In the movie, David Bowie is so ethereal. We needed to have a grounded protagonist, a grounded alien, who had to get a thing done really, really badly, and could not wait for people to do it. He had to do it himself. In the movie and novel, the alien comes to Earth and it takes a very long time. He’s waiting for a lot of stuff. And we knew that we had to have a go, go, go kind of protagonist.

What are some consistent elements you thought important to keep from the earlier incarnations, and how did they resonate with you?

There are certain themes of loneliness and isolation in all three pieces of material. Sometimes you don’t know why you’re doing a thing until a couple of years after you’ve done it, and you look back thinking that it was for one reason, but it turns out to be something completely different. I’ve gone through a lot of loss, a lot of personal loss, four people in my life, and every single solitary day, I felt like I was on another planet, and I felt like I didn’t know the terrain at all. And it was like, you’re stepping in potholes all the time, and the ground is shifting beneath you because you’ve lost somebody that you love. This happens in moments of joy, too. I remember leaving the hospital after my first kid and the world looking completely different. I remember thinking, “Well, I’m on a brand new planet.” Also, the world was insane. We started writing this in July of 2018. The world was out of its mind. I didn’t understand a lot of what I was seeing. My internal landscape was, “I don’t know where I am.” For me, externally, I had a couple of questions like, “Wait. How did we get here? Who made that left turn, what the hell is going on?” So this piece of material, the novel, the movie, this story, allowed me to write through my shit, and I’m grateful.

Very much so, and to not be fully in either space is pretty terrifying and vulnerable. The character of Justin you could also say is living between two worlds, as a Black woman in the United States. Her family is living between two worlds in that her father has one foot in the next plane. Her daughter Molly is prepubescent, and so she too is between two worlds. The best stuff happens on those long left turns, man, when you’re neither here nor there. I think that everybody can relate to being in a place that they don’t quite understand, and you don’t know if it’s home yet, or if you have to make it into your home. People trapped between, people in a limbic space, both metaphorically and quite literally, those are exciting themes that were certainly in the book and are in our show. I think our show, because we have 10 episodes, we have more time to linger, more time to explore what that feels like. I think everybody feels it now. The world is nutty, and I would like to see how other people are coping, even if it’s through a spaceman.

What did Chiwetel Ejiofor bring to the role, and what was collaborative around how he expressed the propulsive aspect of Faraday onscreen?

He has an extraordinarily powerful work ethic, and he has a barometer for truth. He is very invested and investigates the text very thoroughly. If something bumps him up, we probably got it wrong. Because he has this barometer, he spent a lot of time, which is so right and why he’s him, thinking about how the character Faraday moved and communicated on his own planet of Anthea, so he could know how Faraday would move and communicate on Earth. He did a staggering amount of physical work and investigated text every day. He’s got a very powerful mind, and you could see because he had to calibrate how much of Faraday was human and how much Faraday was alien.

In the very first scene, you have a Steve Jobs version of Faraday portrayed and then go back to the beginning of his story. It makes the audience curious about how he made that journey.

That’s Alex Kurtzman. Alex was like, “What if Steve Jobs were an alien?”  If you told me that he was, I would believe you. If I understood who Justin had to be, Alex was the one who understood that if an alien landed now, he would have to be Steve Jobs to make sure that nobody killed him, which was very astute.

You have said that women of color are the most vulnerable endangered species on the planet, but what’s great about Naomie Harris’s character Justin is she’s both wildly cynical and has a bone-deep kindness, or she wouldn’t have responded to the alien. As a Black lead character, she stands for all of humanity and for Black women specifically. How did you thread that needle?

Well, it has always been the needle, in the sense that because proportionately we don’t have a lot of Black characters, one black character always ends up having to represent an entire people. My great-grandmother was in the tent shows in the deep south. I’m fourth generation, my son is fifth generation, so we’ve been doing this since the reconstruction, and certainly, with my grandmother [Jenny Lumet’s grandmother is jazz legend Lena Horne], the onus of being ‘the one who must be all’ was on her. That needle has been threaded many times, and very successfully. That said, for Justin, I remember seeing my grandma on PBS Masterpiece, when she was in her 90s, and she shook her fist and she said, “They never show us just being.” Justin is just being. She’s making choices to do what she needs to do. If it is remarkable, to have a fully actualized, nuanced, complete Black female character, then the job is to make it less remarkable.

The Man Who Fell to Earth premieres on Showtime on April 24th, with the first two episodes playing back to back. Subsequent episodes will stream each week.

Featured image: (L-R): Chiwetel Ejiofor as Faraday and Naomie Harris as Justin in THE MAN WHO FELL TO EARTH. Photo credit: Aimee Spinks/SHOWTIME.

TAGSDirector Interviews Showtime The Man Who Fell To Earth