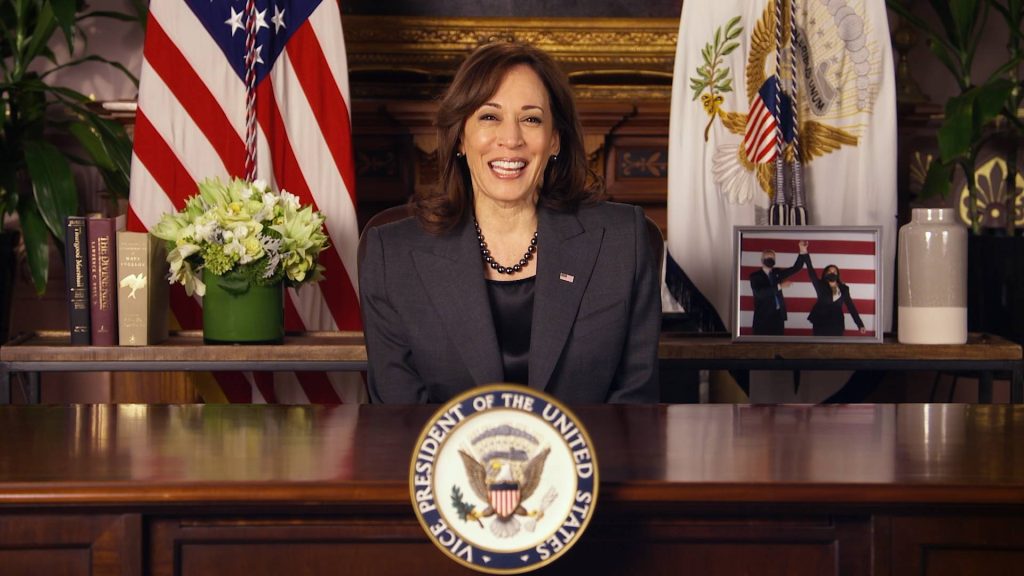 “We are a nation of visionaries,” Vice President Kamala Harris says at the top of her remarks about the Motion Picture Association’s centennial. The Vice President was one of nine leading lawmakers to speak about the centennial and the importance of the MPA’s work advocating on behalf of the film and television industry. “Members of the Motion Picture Association, for a century you have written the lines we will never stop quoting. You have created the images we will never forget. You have put moments on screen that take us back and guide us forward. You have connected us with each other and with the world. Just think that for a child growing up in a country far away, America can feel very distant, but because of your work, American culture, American values, American aspiration are just a click away.”

“The film and television industry has been such an important social, cultural, and economic force in the communities I’m privileged to represent, in the city of New York and throughout the country,” Representative Hakeem Jeffries says in his remarks. Representative Jeffries reminds us that in Article 1, Section 8, Clause 8 of the United States Constitution, a crucial power was bestowed upon Congress—the power to create a “robust intellectual property system.” This power was created by the Framers to promote “the progress of science and useful arts.” Simply put, the Framers knew that a robust creative community, and therefore a robust culture and economy, could only exist if those creatives could benefit from their work.

From an economic standpoint, it’s hard to overstate the importance of the film and television industry, which employs more than two million people in the United States, “You are an engine of economic growth for communities big and small,” the Vice President says. From a global vantage point, the film and television industry are two of the most important exports of the United States, as Representative Judy Chu explains in her remarks. Our films and television series are more than just the finished products of a robust industry, they represent our hopes and dreams, our struggles and our ambitions, and make a massive, positive impact on the way the rest of the world sees America.

Hear for yourself what these leading lawmakers have to say about the industry on our special 100-year anniversary page, which includes personal stories about how they’ve been shaped by the stories they’ve seen on screen. One such story, from Senator Chris Coons of Delaware, is about how director Ivan Reitman’s 1993 film Dave inspired him. Dave, you probably remember, stars Kevin Kline as Dave Kovic, the spitting image of Bill Mitchell, the President of the United States. When Dave has to step in for President Mitchell, thanks to some nifty screenwriting magic from Gary Ross, he decides he wants to do more than just look the part. As Coons recalls, watching this “earnest small businessman who runs a hiring agency” roll up his sleeves and fix the federal budget made a lasting impression on him.

For 100-years, the Motion Picture Association has been committed to defending and supporting creatives. The mission here at The Credits has been to highlight some of the people that the MPA has been advocating for, primarily the lesser-known—but absolutely vital—artists, technicians, and craftspeople who make the films and television series you love. For more stories on the industry, including in-depth interviews with filmmakers and TV creators, check out The Credits, including an interview with our MPA Creator Award Recipient, writer/director Nikyatu Jusu.