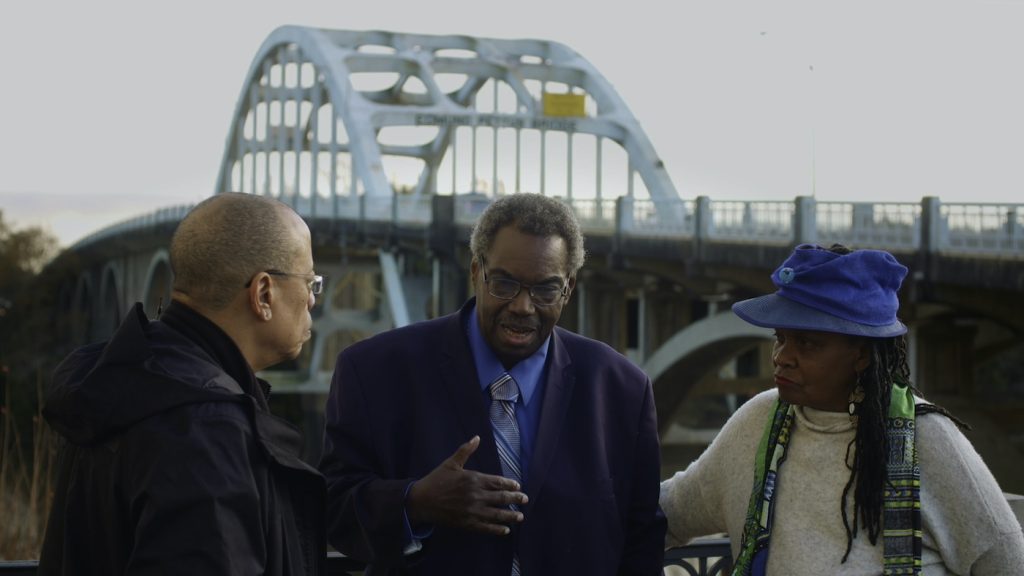 The documentary Who We Are: A Chronicle of Racism in America has won numerous awards at fests across the country, including the Audience Award at the 2021 SXSW Film Festival, and boasts a 98% score on Rotten Tomatoes. The film is based on criminal defense and civil rights lawyer Jeffery Robinson’s work relearning American history and sharing knowledge that includes events and episodes either erased from in history books or never included in the first place.

Who We Are interweaves a 2018 lecture by Robinson with interviews and footage of Robinson’s exploration of historic locations across the country. His journey takes audiences to places like Charleston, South Carolina, Tulsa, rural Alabama, and New York City, giving context to the legacy of white supremacy and its part in the racism that continues to keep the United States of America from ever truly being united, or whole.

Directed by sisters Emily and Sarah Kunstler, the film considers our communal responsibility to accept our complete history, rise above it, and create change. The Credits spoke to Jeffery Robinson and the co-directors about the experience of working together on this powerful film, now part of a larger Who We Are Project, which offers lesson plans, a podcast, and resources on their website.

The footage from Charleston is really powerful. There are so many landmarks that speak to the history of racism in America.

Jeffery Robinson: Charleston was a deeply emotional experience for all of us, because of the things that we went through there. We went to a plantation and saw documentation of the way enslaved people were treated and saw things like, ‘Well, we’re going to lose so many to water moccasins, so many to dysentery, a couple of them will drown, and this is our planning for what we’ll need in the next year.’ We went to the Old Slave Mart Museum, where, once the people of Charleston found the sale of enslaved people in the open air to be somewhat offensive, they decided to take it inside so that people wouldn’t have to see it. There we saw things like shackles made for three-year-olds, and whips with nailheads embedded into them to help tear the skin more effectively. Then we spoke with the gentleman on the waterfront with the Confederate flags, who had his view of slavery and American history so, all of the trips were incredible, but that trip had its own special content, I guess.

Your film shows the fingerprints that enslaved people kept putting into places when they were building things just to be remembered. This is particularly powerful because the Who We Are Project is about teaching what hasn’t been taught or remembered.

Emily Kunstler: Those fingerprints are all across the East Coast of this country. The first parts of this country that were built, were built predominantly by its by enslaved people. A lot of this film is about what is and isn’t memorialized. And the things that are there, and should be recognized and exist as reminders for all of us, even if we don’t choose to look at them. The fingerprints, yes, but also the hanging tree that has no sign on it, that you just drive by, the platforms of the houses that were never rebuilt in Tulsa after the massacre, these all stand as monuments, essentially, to this time and to this stolen American history.

What was the experience of speaking to Mother Lessie Benningfield Randall? The whole film is really powerful, but to hear a woman over 100 years old talk about being a witness to the Tulsa massacre would be reason enough to see the film.

Jeffery Robinson: That’s an example of an activist community that is very aware of and protective of the people that have endured over the years. We went to Tulsa two times, and Mother Randall was sick both times. As you say, she’s over 100 years old, so we were really, really anxious to interview her. The first time we went, folks were like, ‘Yeah, maybe somebody knows her, we’ll see.’ And I think they were trying to find out just who we were. ‘We ain’t takin’ you to see her just because you come in and say you want to see her.’ That’s one of the things we’re very proud of and very happy about, the relationships we’ve made there. We’re headed to Tulsa, on the 25th of this month, because there’s going to be an opening there. We’re going, all three of us will be there with members of our family. Speaking to her was remarkable. It was stunning when she described seeing bodies in the street that she thought were sleeping people and then had to be told they’re not sleeping, they’re dead. And to have that kind of memory in her head just gives you a view into what happened during that event. Thank goodness we have that on film. For the next who knows how many years, we’ll be able to look at that and say, ‘Hey, this is actually something that happened, and this is a woman that lived through it.’

Emily and Sarah, as the directors of this project and as white women, what did you learn and gain through this process?

Emily Kunstler: For me, it was being allowed to be present for the retelling of this history, and being able to be in the room when people would relive these experiences and these traumas. It really felt like a privilege and an honor to be able to be there. And this is a trust that we would not have earned on our own, this was a trust that Jeff earned, and we got to go along with him. So that was definitely one of the greatest privileges of making this film for me.

Sarah Kunstler: I would echo that, and I would also say being on this journey with Jeffery and Emily, and the rest of the team. and the conversations we would have about the history that we were learning, I really treasure that. To get back to whiteness, being a part of that allowed me to be a part of a space where I was in a continual dialogue with our team about this history, and about questions of how to share it, and what it meant for us, and whether learning this history could result in any change for people who might be resistant to it. These were wonderful conversations. It’s giving yourself permission to talk about it, because one of the casualties of the erasure of this history, not just for white people, but for all of us is we haven’t talked about it so what we’ve lost is not just the history, it’s the language of talking about the history, the process of recovering it is also the process of learning a new language to talk about it and reckon with it.

And how do we get people that are resistant to watch this movie?

Jeffery Robinson: People say, ‘Aren’t you just preaching to the converted?’ and my response is the converted have a lot of work to do.  The converted don’t know this information, and the converted may say, ‘Oh, I believe in this, that or the other.’ But if you don’t know this information, then the discussions that you get into, the debates that you may have, are more emotional, more of an opinion, and that is definitely not going to change anybody’s mind. But when you can give people facts, and I go back to that man on the waterfront, he wanted to talk about taxes until I demonstrated I knew what taxes he was talking about, and then he wanted to talk about how they were treated like family, until I could then talk to him about what that meant. I don’t know if we changed his mind, but I’ll tell you this, there’s a military JAG officer that came up to me after he saw the film and said, ‘You know, I appreciate that you spoke to him with respect and that you gave him facts because that man is every man in my family. And when I show this movie to my family, the fact that you were talking to him and not yelling at him is going to make it more difficult for them to ignore.’ So I have no idea whose mind will or won’t be changed, but I know exactly what will happen if nobody reckons with this history, so this is an easy choice. It’s not like, ‘Oh, is this going to work?’ It’s more that I know exactly what’s going to happen if no one pushes this, so it’s a very easy decision for me.

Sony Pictures Classics’ Who We Are: A Chronicle of Racism in America is playing in select theaters nationwide.

Featured image: Left to Right: Jeffery Robinson with Senator Hank Sanders and Faya Ora Rose Toure in Who We Are. Photo by Jesse Wakeman. Courtesy of Sony Pictures Classics

TAGSInterviews Sony Pictures Classics Who We Are: A Chronicle of Racism in America