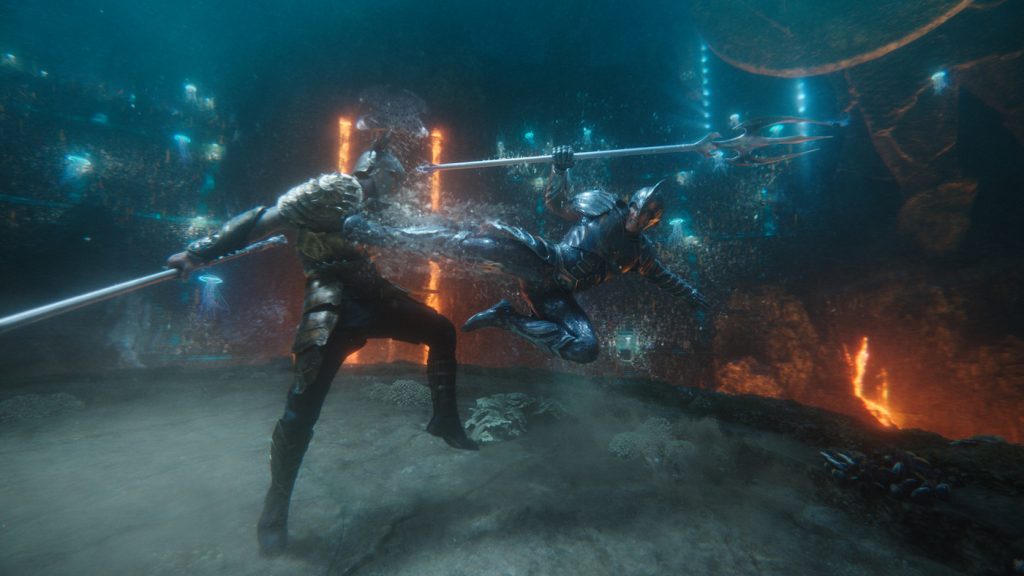 Aquaman and the Lost Kingdom will splash into theaters right in time for Christmas, on December 16, 2022. While we still haven’t even seen the first trailer for director James Wan’s hotly-anticipated sequel, we are starting to get a few tidbits about the film itself. It sounds as if the sequel will enjoy the benefits of brand new visual effects technology that DC is deploying on its upcoming slate of films.

While plot details are being kept under wraps (location; somewhere beneath Atlantis), Patrick Wilson, Ocean Master himself, told Collider that Wan and his creative team utilized those brand new VFX techniques to capture the film’s epic action. Wilson said that the action sequences benefited from techniques that the Warner Bros./DC team used on both Aquaman and the Lost Kingdom and director Andy Muschietti’s upcoming The Flash, which will be the first stand-alone film for Ezra Miller’s speedy superhero.

Wilson also told Collider that thanks to the original Aquaman‘s success in 2018, it’s afforded the cast and crew the ability to have fun while still tackling the franchise’s weightier themes:

“Clearly the movie went beyond a fanboy demographic because it made whatever; billion dollars, right?,” Wilson said. “So that affords you freedom of, ‘You know what? Let’s keep it fun. Let’s make it fun.’ And we still have our layers of environmental issues. We’ve got great relationships in the movie, some fantastic action sequences.”

Wilson couldn’t expound on the storyline itself, but what we know is that a lot of the stars from the first film are returning. Along with the film’s star, Jason Momoa, the cast includes Yahya Abdul-Mateen II as Black Manta, Amber Heard as Mera, Temuera Morrison as Tom Curry, Nicole Kidman as Atlanta, and Dolph Lundgren as King Nereus. And then there are the newcomers we know about, who include Jane Zhao as Stingray, Indya Moore as Karshon, and Game of Thrones’ scene-stealer Pilou Asbæk in an undisclosed role (almost certainly a villain).

Finally, we do have a brief synopsis, which hints at Aquaman and the Lost Kingdom‘s focus on environmental themes, as Arthur Curry and his allies fight to keep Atlantis from total devastation:

“When an ancient power is unleashed, Aquaman must forge an uneasy alliance with an unlikely ally to protect Atlantis, and the world, from irreversible devastation.”

Needless to say, this all sounds thrilling. Once the first teaser drops, we’ll have a better sense of what those new VFX techniques have made possible, as well as how Wilson’s defeated (but still defiant) Ocean Master will factor into the story.

For more on Aquaman and the Lost Kingdom, check out these stories: