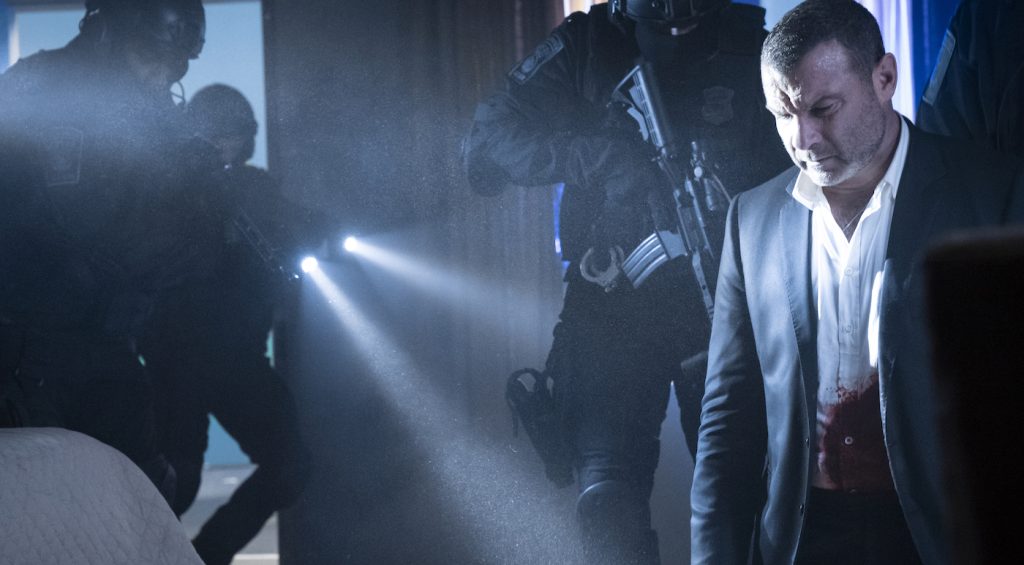 When Ray Donovan debuted on Showtime in 2013, Liev Schreiber introduced the character as a brooding fixer who uses a baseball bat to make problems go away for shallow celebrities and sleazy Hollywood moguls. But over the course of seven seasons, the one thing Donovan could never fix was his own broken family, headed by the charming but awful con artist father Mickey (Jon Voight).

In February 2020, Showtime dumped the series without warning. Longtime fans were not happy and neither was showrunner David Hollander. Schreiber took to Instagram asking fans to protest the cancellation while Hollander vented his frustrations in a widely circulated interview. One year after the series’ cancellation, Showtime officially announced the return of Ray Donovan in the form of a feature-length finale. Ray Donovan: The Movie, which debuted on Jan. 14, picks up where Season Seven left off: Mickey’s made off with a briefcase filled with ill-gotten gains. Eddie Marsan and Dash Mihok, as Ray’s haunted brothers, deal with their own demons while Kerris Dorsey, playing Ray’s daughter, tries to cope with the killing of her husband. “It’s a murderer’s row of actors,” says director Hollander, who co-wrote the script with Schreiber. “In this film, we’re looking at the idea of legacy, from the father to the son, from the son to his children. Is it possible for these characters to escape a violent past?”

Speaking from his Los Angeles office, Hollander, scheduled to scout locations for his series adaptation of American Gigolo later in the day, talked to The Credits about how he and Schreiber resuscitated Ray Donovan for one last hurrah.

One year after Showtime dropped Ray Donovan, the network officially changed its mind and announced Ray Donovan: The Movie. Why’d you get canceled in the first place and how did you manage to bring the show back?

There had been a shift in Viacom leadership and we were an expensive show. In December 2019 Showtime executives told me over lunch what they were thinking. I didn’t feel good about it. I let them know if they did cancel us, I would go to the press and be vocal about the situation. It was very clear to me that as hard as the show is to make, we hadn’t finished it for the audience. It felt weird to just go, “We’re done.”

A few weeks after that lunch, Ray Donovan got officially canceled. You gave an interview expressing your displeasure and Liev rallied the troops on social media.

Ray Donovan fans started canceling Showtime and we saw all this movement on social media after Liev put something on his Instagram account saying we’re fighting to get the show back and can you help us? To Showtime’s credit, they quickly decided to bring the show back, although it was amorphous about what form it would take.

Once you got the go-ahead to return, what was it that you most wanted to resolve in Ray Donovan: The Movie?

From the jump this show has been about a very simple question: can you escape the violence of your past? In most [crime stories] from the seventies, eighties, nineties, the answer has been no. People just get more and more brutal. We were really interested in exploring which camp we would end up in with the Donovan family. Would there be a change?

Ray Donovan, the series, always featured formidable adversaries portrayed by actors like Ian McShane, James Woods, Susan Sarandon, and Hank Azaria, who won an Emmy as a disgraced FBI agent. Why does this movie sideline heavyweight antagonists to focus almost entirely on Ray and his family?

In episodic television, procedural stories are really useful because you need fresh meat all the time to oxygenate the characters and bring in new colors. But for this, we didn’t need a fresh story; we wouldn’t have enough time to resolve it in two hours. We needed to take what we had and run with it. We wanted to show that the real enemy is inside Ray’s head, so we set up a super-structure that would let the story sit within one man’s struggle.

The movie flashes back to Ray’s traumatic coming of age in Boston decades earlier. Did you feel like you needed to go back in time to show how Ray became so screwed up?

The flashbacks, frankly, started out as a surprising development back in Season Seven when I just felt a strong tug to go in that direction. [With this movie] I knew we’d be going back to Boston and continuing with the flashbacks.

You’ve spent nine years in the trenches with Liev making a show that must have been pretty grueling at times. What does Liev Schreiber bring to the table?

He’s extraordinarily bright. Liev’s sense of drama, his narrative instincts, the breadth of his knowledge, his physical abilities – – he’s really something. It’s been a good relationship throughout the show because I saw a lot of what was f**ked about his character, but Liev always fought very hard for Ray, trying to keep things as simple as possible and fighting against any artifice. He also helped me loosen the reins. I’m a very structured person and Liev lives in a looser domain.

There’s no Ray Donovan without Mickey Donovan, arguably the most awful father on television. But Jon Voight infuses Mickey with so much personality. audiences want to see what he’s going to do next. In this movie, for example—SPOILER ALERT—Mickey sings the hell out of the 1936 ballad “Can’t Stop Lovin’ Dat Man.” Jon Voight crooning “Fish gotta swim,” a cappella – – that’s a startling moment. How did you arrive at that scene?

That actually came to me by accident from a piece of dialogue Liev and I wrote, where Ray’s trying to explain something he did and says, “Fish gotta swim.” I went, “Let’s grab that!” When you give Jon Voight a scene like that, he comes to play and he likes lots of takes. My job was really to whisper in his ear, go back behind the monitor and watch something that exceeded my expectations.

Psychological issues drive the Ray Donovan narrative but physical carnage also plays a big role in raising the stakes. Ray Donovan: The Movie includes a humdinger of an action sequence in three acts: beating, car chase, shoot-out. Did Liev have a hand in choreographing that fight?

Liev not only had a hand in it, but he also had a vision for it. He used to be a stunt man and fight choreographer. I’ve never worked with anybody like him in my life because we never had to double him unless he wanted us to. For that fight, we drew a tough straw because it was a hundred degrees in Connecticut when we filmed.

In the series as well as this movie, Ray and Mickey’s scenes crackle with so much tension. As the director, how do you nurture that chemistry?

It’s always an adventure because Liev and Jon are so different as actors but they’re both perfectionists. Jon acts more with his body. He likes to go high, go low, whereas Liev finds these [psychological] nuggets he’s going to hold on to. I just try to let things feel easy and authentic between them. It’s about how Mickey and Liev think of themselves, next to each other. What they want to believe and what may be true are very different things.