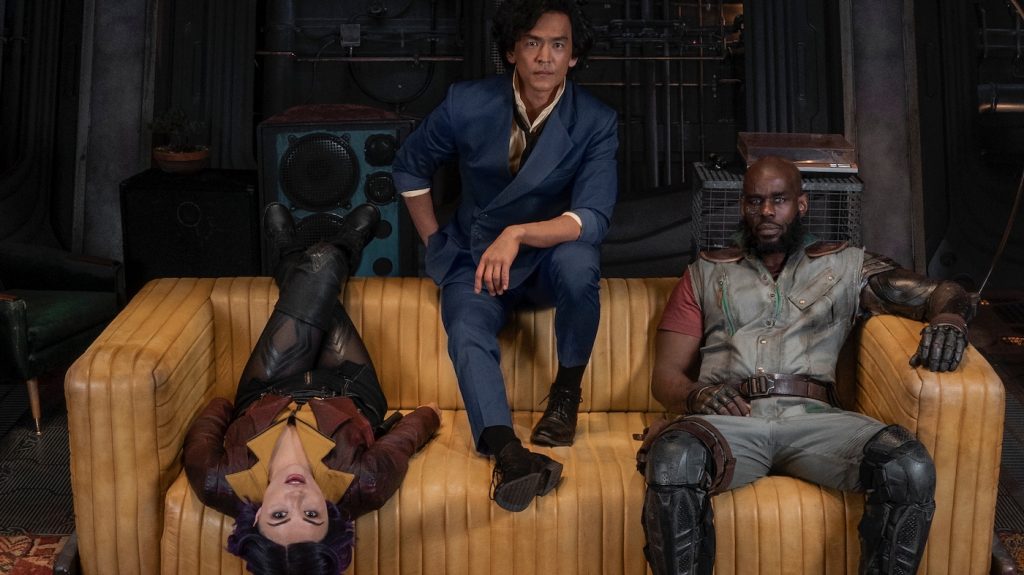 How do you approach adapting the looks of a beloved Japanese anime series for a live-action Netflix series? This was the challenge for Cowboy Bebop costume designer Jane Holland, who managed to capture the glorious color of the original anime series about a crew of bounty hunters who will zealously pursue even the most dangerous criminals in the galaxy—if you’ve got the money—and do it all in the boldest of styles. Cowboy Bebop stars John Cho as the perenially sad bounty hunter Spike Spiegel, alongside Mustafa Shakir as Jet Black, his loyal partner and captain of their ship, and Daniella Pineda as the amnesiac wildcard Faye Valentine. The series tracks the trio’s adventures through a galactic starscape in 2071, after Earth has been used and abused into a husk and humanity has spread out amongst the solar system’s nearby planets. Life is hard and gets harder still when Spike’s old nemesis Vicious (Alex Hassell) puts a bounty on his head.

Throughout the first season, Holland managed to nail the transition from anime to live-action without losing the original’s vibrant colors and sense of freewheeling madness. We spoke to her about the delicate balance between honoring the original series and creating something that can stand on its own.

What were your initial conversations with the creative team like when discussing how to visually approach adapting a beloved Japanese anime series?

Enthusiastic and wide-ranging. We were all inspired by the storytelling, music, and imagery of the anime. In pre-production, the showrunner and directors screened an episode of the anime every Thursday. It brought us all together and kept the fire of the anime burning, both of which fed into a cohesive vision. Preproduction is so busy, you can easily disappear into the vacuum of your own department.

I imagine it’s no simple task honoring the anime without merely trying to replicate it?

The anime is dense and layered in references and imagery. In the context of adaptation to live-action, I guess a good way to describe the anime is as concept art. Concept art (in film & tv) is about vibe and feel. To get from concept art to 3-D and a human form is a journey of inquiry. We wanted to embody the spirit of the anime, especially in the core characters and this was the springboard for design. In bringing it to life, we sought to create our own version of this kind of intricacy. The gritty retro sci-fi world was something we were excited about. The anime has a lived-in feel, and that’s what we aspired to, rather than a clean & futuristic high-tech space world. André Nemec is an inspiring showrunner. He has an expansive mind and from the outset was keen to see what we would bring. Cowboy Bebop is one of the most fun creative experiences I have had as a costume designer.

What specific inspirations did you take from the original series, and where did you decide the live-action adaption needed its own specific look?

So many inspirations: the music for sure. Bebop is about breaking free of conventions and improvisation and that was what inspired me creatively to always push a bit further to find an individual and interesting edge to the design. And the anime is imbibed with references. I would harvest these for a character and use them to inform design – for example, the character Asimov [played by Jan Uddin] is named after the writer Isaac Asimov. I took a section of the circuit board off the cover of Isaac Asimov’s book “I, Robot” for the patterning on the character’s trophy belt buckle and stitching detail on the patch pocket of his pants. The peppering of trophy buckles, Wrangler-style jeans made from a surprising fabric like vintage suiting, cowboy boots, and hats with bites taken out of the brims (because that’s what the graphic drawing of a hat brim perspective looks like) throughout the series is a nod to the Cowboy in Cowboy Bebop.

There are a lot of colorful characters, both literally and figuratively, in the series. How did their clothes help tell their individual stories?

If Spike looks like he stepped out of the anime, then I achieved what I set out to do – to capture the essence of the anime and add dimension in bringing it to life. The cut of Spike’s suit is not literally from the anime, it’s an embrace of the adjectives. What I worked towards was the louche nonchalance, effortless style, and cool vibe of the anime designed specifically for John Cho, and functioning for the action and practical requirements of filming. The suit had to work hard for the season. There was a lot to consider in the choice of fabric, and in the execution of the design.

Working in such a fantastical world would, one might assume, give you creative license to get crazy with the clothes. What might readers find surprising about your design choices?

I hope the thing that resonates is the thought and care that went into creating designs with substance. We had a lot of creative freedom, and most costumes are manufactured or vintage with a twist in styling. Everyone on screen has been costumed. Part of making a world real is repetition and extrapolation. If you commit 100% and are consistent in the parameters, it becomes a convincing look of a particular community rather than noticeably crazy costuming! I’ve pushed for non-gendered clothing for years and not always gained traction, but Cowboy Bebop was the opportunity to use things like ties, skirts, and heels universally, particularly with the diversity of casting in our background performers. It was really about clothes for all people and design choices based on character, action, and environment rather than following conventions.

Did you have a favorite character to design for?

Really there are so many. The signature costumes of the core cast, of course. Ana with her incredible fringed coat, a tribute to Cicely Tyson and Miles Davis in the 1960s, the honeycomb motif derived from the logo of the corner store in Ana of the anime and realized in eclectic jewelry inspired by Erykah Badu. I enjoyed Julia and Gren because I created collections for them. They had a lot of changes and there’s a play between them as they have a special connection. Julia is between worlds until the finale when she appears in the trench coat which would have become the signature costume for her going forward. Gren embodies the expression of Ana’s bar, a chameleon and free spirit. Working with Mason was cool. We created a library of garments and put them together in different ways – tailored suits, liquid silk slip dresses, corsets, metallics, and leather – and theatricality grounded it in a language we created for Gren influenced by designers like Margiela and Alexander McQueen and tributes David Bowie with the code from his last album Blackstar spelling out.

How did you collaborate with your fellow department heads in the overall look of the show?

I had a close creative relationship with the showrunner, the directors, and the production designer right through the production. We shared and played off each other’s ideas, planting seeds that we would expand in exciting ways to create layered and interesting worlds. What I love most about working in film and tv is the diverse collaboration. The stunt department is close with costume. We had a core group of incredible athletes and martial artists who played multiple roles with multiple fight styles. We had to ensure they could do what they needed to do, but they really embraced the diversity of costuming and character we presented them with. The interface with Hair & Makeup was particularly important for the Bebop twist. We mixed eras and styles, and making that work was about fine-tuning the discord to find resonance. The cinematographers bring everything together, taking our collective work to the next level. The relationship with actors is really important for me. I like to have a preliminary conversation to share thoughts and ideas so we start on the same page and, through the design process, infuse as much as I can to feed into character and performance. A lot happens in a fitting and the moment it all comes together, the moment an actor transforms into the character in front of you – it’s magic!