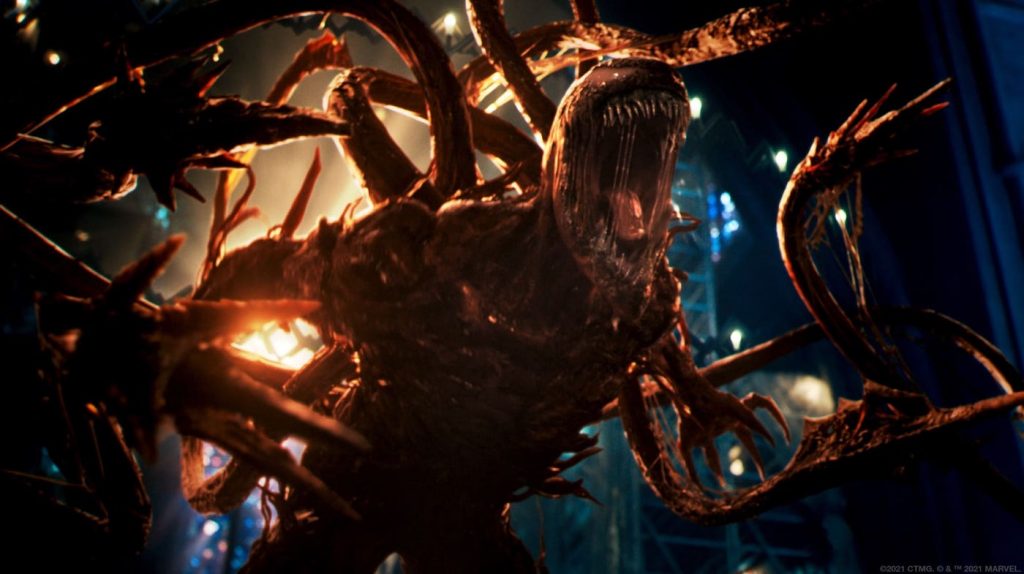 The first reactions from critics who have seen Venom: Let There Be Carnage are spreading like an alien symbiote across the internet. The good news for fans of the 2018 original? Let There Be Carnage is even more bonkers. Director Andy Serkis has picked up where the original left off and leaned into the lunacy, and the early takes are that the film, and Tom Hardy especially, are reveling in the madness. As fair warning, however, know that if you go snooping on Twitter too deeply, there are some people spilling plot points, so be careful. We’ve included just a few reactions below to give you a taste of what to expect without divulging any of the film’s twists.

Hardy plays Eddie Brock, of course, the reporter turned human host for Venom, an alien symbiote who has a penchant for eating his enemies (and others, frankly). In Let There Be Carnage, Eddie and Venom are more or less a romantic item (Andy Serkis has called their relationship the film’s central romance), and while you chew on that tasty morsel, remember that Let There Be Carnage features another alien symbiote, the titular Carnage, riding shotgun in the human body of killer Cleatus Kasady (Woody Harrelson). Kasady has a main squeeze, Frances Barrion (Naomie Harris) who also has the ability to kill people with a scream, hence her other name, Shriek.

So there’s plenty of madness to go around, with a great cast (including Michelle Williams, returning as Anne Weying) and a talented director. If you liked Venom, sounds like you’re going to love Let There Be Carnage.

Now let’s get to those early reactions, which are all spoiler-free. Venom: Let There Be Carnage hits theaters on October 1.

Venom: Let There Be Carnage is a wild-ass movie of the highest order. Ultraviolent rom com that is delightfully self aware and weird. Tom Hardy gives 200%. Whatever you do, don’t miss the post-credits. #VenomLetThereBeCarnage pic.twitter.com/yoSBH67wMs

The #Venom franchise has a special place in my heart. Let There Be #Carnage was such blast. It’s silly. It’s fun. And if you loved Eddie and Venom before, it’s just more to love. Kid-Me wouldn’t believe the nerdy glory we’re getting these days.

I want a symbiote. @VenomMovie

Tom Hardy is fantastic in #Venom2 – a film that gladly & madly leans into its darkly hilarious tone & then some. Definite NATURAL BORN KILLERS vibes from our villains, but it’s ultimately Hardy who steals every scene w/ a one-of-a-kind performance that’s SO much fun to watch pic.twitter.com/97vO6rHing

VENOM: LET THERE BE CARNAGE embraces the absurd buddy romance from the first film even more. Andy Serkis keeps the action & humor moving quickly even if it doesn’t always land. Tom Hardy’s gonzo performance is still a highlight while Woody Harrelson relishes every sadistic moment pic.twitter.com/lQN9W3vaBx

Tom Hardy is having the time of his life and Andy Serkis flexes those MoCap & CGI muscles to give us truly intense & visceral Symbiote battles! pic.twitter.com/Zfxu8ApiTZ

And it really sounds like the post-credits scene is a must-see:

The post credit scene for #VenomLetThereBeCarnage had my theater rocking.

And finally, if you want to get roasted by Venom on Twitter, well, you can:

Eddie says no eating people today but roasting is allowed. If you can handle a bite from me, comment “#Venom Roast Me” below. #Venom Day pic.twitter.com/QJrJZclKFm

For more on Venom: Let There Be Carnage, check out these stories: