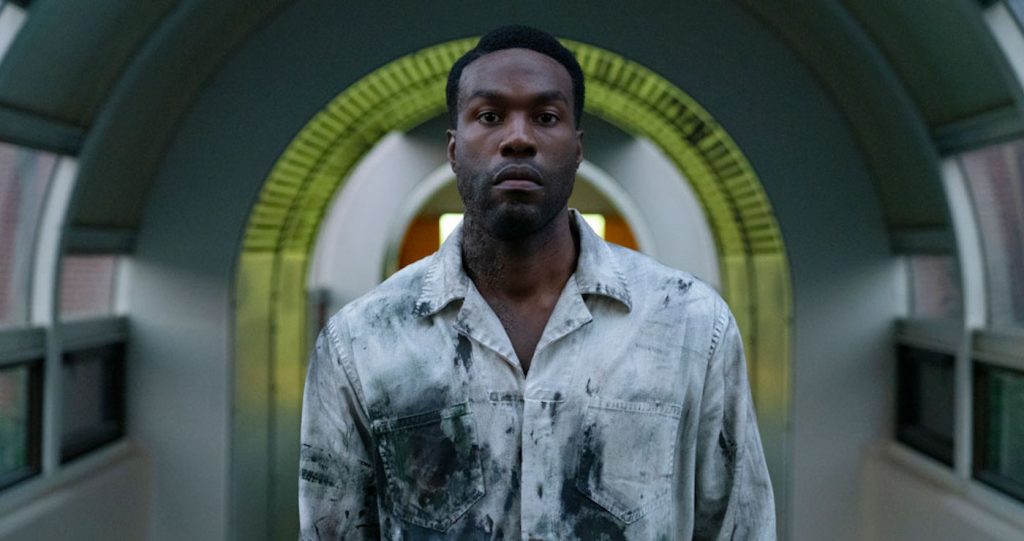 It’s hard to believe that someone as soft-spoken as Brooklyn musician Robert Aiki Aubrey Lowe could be responsible for the dread-inducing soundscape that underscores the return of cinema’s most horrific throat-slashing boogeyman. And yet, that’s exactly what Lowe has achieved in his score for Candyman (opening Aug. 27). The film, from co-writer/director Nia DaCosta and co-writer/producer Jordan Peele, updates the original 1992 horror movie by tracking artist Anthony (Yahya Abdul-Mateen II) as he tries to wrap his bee-stung arms around the mysterious re-emergence of the murderous Candyman in Chicago’s newly gentrified Cabrini Green neighborhood.

Co-starring Colman Domingo and Teyonah Parris, Candyman introduces Lowe’s dense, brand of electronic music to mainstream audiences, but he’s been developing his edgy sonic palette for decades starting with art-punk band 90 Day Men. Lowe’s solo records, released under the Lichens moniker, showcase a gift for melding modular synthesizer sounds with his own wordless vocals. Factoring in recent indie film scores and guest appearances on such movies as Sicario and Arrival, producers knew what they were getting when they asked Lowe to compose Candyman.

“Luckily I was given the space to do what I do, which means I’ve been able to create something complex for Candyman that that lives as a character in the landscape of the film, says Lowe, who spent ten months crafting the Candyman score. “Working in real-time with the production, I was able to present a sonic landscape in ways that may influence the intention of a scene and vice versa.”

Speaking from his Brooklyn studio, Robert talks about warping his own voice beyond recognition, explains the film’s signature buzzing bee sound, and describes how he tipped his hat to Philip Glass, composer of the original Candyman theme.

Nice work on Candyman, which is both artfully made and also scary as hell.

Let’s begin with the end of this film, where this spooky little melody that’s different from everything that came before plays over the closing credits. How did that theme come about?

“Music Box” is actually a Philip Glass composition from the original 1992 movie which I re-imagined for this film. I was leery of was leaning too deeply into that score because it’s very important that our Candyman has its own identity, its own language within the legacy of this particular piece of folklore. “Music Box” was actually the last thing I performed because I wanted to make sure I established my own voice and built my own world so the score can breathe on its own as more of an organism inside of the film.

I think those are all fairly accurate descriptors that speak to what one would think of as being in the realm of horror but at the same time, it also speaks to the concept of avant-garde classical music. I’ve tethered myself to working in an aleatoric way where you’re incorporating chance and rolling the dice to discover things that pull you out of your comfort zone. I can then take those components and very intentionally arrange them as compositions.

And you rely on the modular synthesizer to create these sounds?

It sounds like the Candyman score occasionally includes acoustic instruments?

Yes. I like utilizing acoustic instruments but not necessarily in the way they were intended to be played. It’s about coaxing sound from the instruments.

Can you give an example?

I worked with contrabassist/synthesist Matthew Morandi and had him improvise on top of the bridge. In doing so he created sounds you wouldn’t normally associate sonically with a string instrument. I also have an Indian tamboura, which is meant to be plucked with fingers. Instead, I took a violin bow to it and produced a sound more like a hurdy-gurdy.

How did you use your voice as raw material for the score?

The way I play around with my voice has a lot to do with how I position my body and where I sing from. Whether it’s my nasal cavity or throat or diaphragm, I can create sounds that might be akin to a woodwind instrument or a brass instrument. Since I’m not dealing with words, I’m able to create clusters of voices and process them through effects where the listener goes “What is that? I’m not sure…”

That uncertainty lends the score a real sense of suspense.

And that’s important because the score is dealing with illusion so I created psycho-acoustics where you don’t know what is real and what is fantasy. I wanted to explore the trauma of black bodies, the legacy of this folklore. In constructing this history of the original Candyman, Daniel Robitaille, it was about going back even farther to think about the slave trade, western Africa, delving into these ideas of polyrhythms and storytelling that were passed down and passed down and passed down. You have a lot of characters dealing with this fear and desire and acceptance and interpretation so I wanted to place that kind of storytelling within the organic space I was creating with the score.

How did you get brought onto this project in the first place?

I met Nia through [Jordan Peele’s production company] Monkeypaw. They had been following my work and knew what I did so they approached me about the score for Candyman in the very early stages. Once I got the script and read it, we had a few conversations and then I proposed a very clear intention for what I wanted to do. During pre-production, the first thing I sent to Nia was the main theme of the film, which you hear over the opening titles. She already had the sound I intended for this film in her ear before she shot a single scene.

I’m not opposed to working the way that most films are made, where the composer brought in at the eleventh hour and score to picture. But in that [situation] you’re accenting something that already exists, whereas if you’re part of the production from the beginning, then your work is fully integrated into the story.

Let’s talk about the bees. The score sounds like it’s literally buzzing whenever Candyman materializes. How did you design that element of the score?

I did field recordings on location [in Chicago] while they were shooting. I’d walk around these rowhouses in Cabrini Green and record insects, I’d record the wind hitting old electrical boxes outside the buildings, just trying to capture the environment. While I walking around, a fly flew into the microphone of the recorder and this very quick buzz happened, then dissipated. When I got back [home] and went through my library of field recordings, I took that sound, amplified it, then multiplied it to make this long band of really dense buzzing.

You like it when things happen by chance, and this fly just happened to collide with your microphone.

Aleatory compositional technique! The other thing had to do with this idea of microsound, or musique concrète, where you chop up sounds and make them into something else. While I was on set, I had Colman Domingo say “Candyman.” I took that recording of his voice, granularized it, stretched it out, and mangled it until it became a texture that was completely unintelligible as the spoken word of the human voice. I wanted the energy of that word – – the summoning vehicle – – interspersed throughout the score.

You created nearly all of the score yourself but also brought in the Oscar-winning composer Hildur to sing and play the cello?

The only other voice in the score is Hildur. She and I have been close friends and collaborators for many years. We’ve performed together enough to understand that my voice and her voice pair very well together. I’d direct her to sing certain things in a certain register, then maybe I’d do a pass myself and blend the two together. It was a way of expanding the multiplicity of voices that Nia liked to talk about.

For more on Candyman, check out these stories: