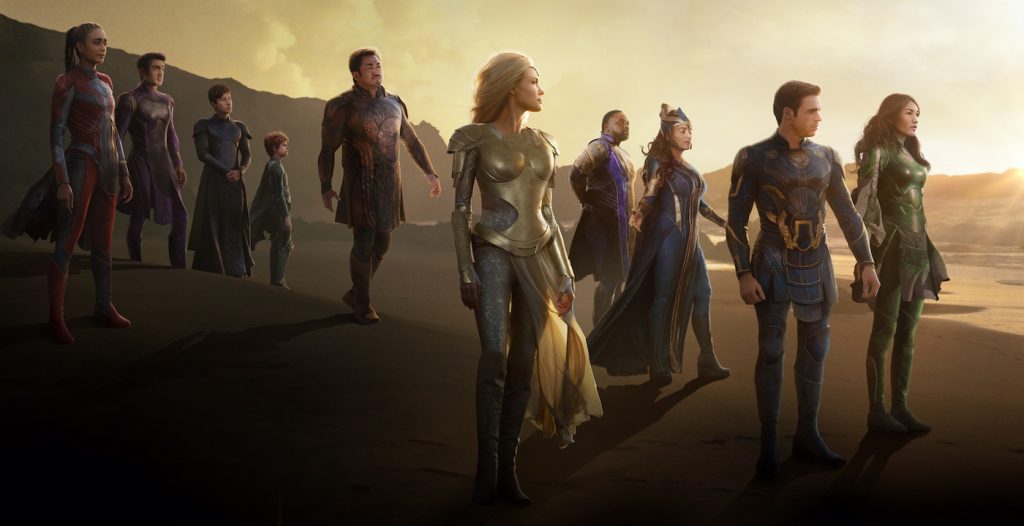 Yesterday Marvel Studios released the final trailer for Oscar-winner Chloé Zhao’s first-ever MCU film Eternals, and it was as sweeping, lush, and epic as we’d hoped. It also revealed quite a bit more of the film’s plot than we’ve gotten before.

The film’s titular superheroes, the Eternals, came to Earth some 7,000 years ago to protect the planet from a vicious threat—the Deviants. Eternals promises to expand the MCU in ways no other Phase 4 film will because its central characters have been so outside the MCU. And what’s more, the film’s look, more epic fantasy and Western than any previous Marvel film, plays to Zhao’s considerable strengths as a filmmaker. In short, Eternals promises to be a completely new kind of MCU film.

This not-quite-Marvel look makes sense given that Chloé Zhao has a very particular visual style and she’s deployed it, or perhaps expanded it, to encompass the cosmic doings of her superhero and supervillain characters. While Eternals is clearly the biggest film Zhao’s ever done, the heart of the story is right in her strike zone. It’s focused on a group of characters—yes, they’re ancient and supernatural—but they’re still people meeting their destinies, dealing with fracture relationships, trying to do what’s right, all against the spectacular backdrop of a planet in crisis. Her films have all had a grandeur to them, even when focused on single characters leading decidedly un-superheroic lives. From a young Native American girl on a reservation in Songs My Brothers Taught Me (2015) to a story about a group of Americans living a nomadic existence in her Oscar-winning Nomadland (2020), Zhao’s films have always looked lush and felt big because to her, every life is of colossal importance.

The final trailer gave us a sense of these supernatural characters dealing with loss, distance, and the effects of time. The Eternals have been spread out as they’ve patiently waited, and watched, and not meddled in human affairs (even when Thanos snapped half of all creation out of existence.) It’s not until the repatriation of all those lost souls in Avengers: Endgame did the Deviants stir, thus girding the Eternals into actions.

What’s so exciting is unlike every Marvel movie of the last decade, practically no one outside of people with deep knowledge of Marvel’s comics canon knows who these characters are, which gives Zhao more room than the directors of more MCU-snug films have had in the past. While the cast is incredible and largely very well known, the characters they play will be brand new to us. And yes, while there is mention of Thanos and the Avengers in the Eternals trailers, everything we’ve seen thus far feels just as much like an epic fantasy film, say a Lord of the Rings, then it does a Marvel movie.

But of course, it is a Marvel movie, and how Zhao and her creative team have connected Eternals to the MCU will be one of the intriguing things to watch for. Seeing how this sensational cast takes on introducing us to a whole new roster of superheroes will be but part of the fun. That cast includes Angelina Jolie, Richard Madden, Gemma Chan, Kumail Nanjiani, Brian Tyree Henry, Salma Hayek, Barry Keoghan, Kit Harrington, Lauren Ridloff, Don Lee, and Lia McHugh star.

Eternals is due to hit theaters on November 3, and it’s sure to jolt the MCU in a way we’ve never seen before.