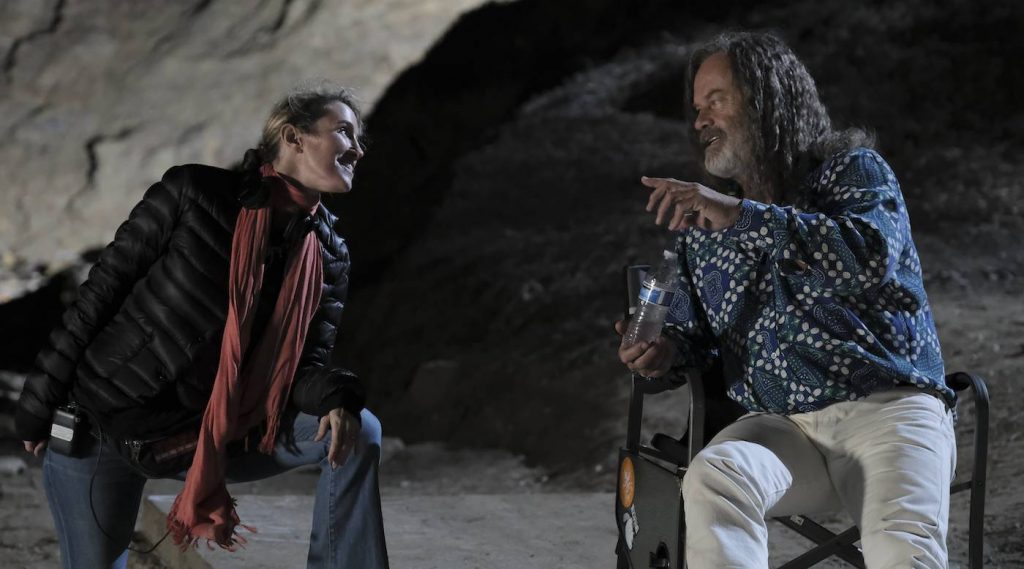 Oscar-nominated producer Rachel Winter worked for years to help get Dallas Buyers Club made, deploying a cheerful tenacity that she’s again and again in her career. The tireless Winter has made a career of finding and shepherding projects, sometimes for years, that she believes in. Or, it might be more accurate to say that Winter has gotten projects made that she herself can’t shake, that she thinks about over and over again. This was the case with The Space Between, which she has been thinking about, and advocating for, for the past two decades. Winter had so metabolized the script, by the late Will Aldis, that she decided to direct it herself. This didn’t mean Winter completely shrugged off her producer’s mentality, but it did mean she was the creative captain, while her producing partners Milan Popelka, Steve Samuels, and Michael Roiff helped her push the film to the finish line.

The Space Between is centered on the 1990s music scene in Los Angeles and stars Kelsey Grammer as a Micky Adams, a washed-up rock musician whose incandescent gifts have cooled into unsellable eccentricity (he made an entire album of the sounds of doors opening and closing). Micky’s trying to stage a comeback, and he sees a potential way in via Charlie Porter (Jackson White), a mailroom employee at his record label.

We spoke to Winter about making the leap from producer to director, how an anecdote from The Sopranos creator David Chase helped guide her selection of collaborators, and why Weezer’s frontman Rivers Cuomo became such a crucial collaborator. The Space Between is available on digital platforms and VOD on June 15th.

How does it feel to be in the director’s chair after a successful career producing movies?

I feel great. The responsibility is very different. I’ve had the responsibility as a producer, where you’ve sold your wares to people who have signed on, and you make the movie. Then you turn that over to a creative captain of the ship and they take that and run with it. This is a different level of responsibility, and I quite like it. I was raised in this business and had a couple of really good mentors, one being line producer Steve Nicolaides who had done Boys in the Hood, Misery, A Few Good Men, and he told me very early on that a producer is a cheerleader, you’re first to arrive and last to leave, and people look to you for that. I feel like that translates really well into being a director, I didn’t want to lose that skill of making people excited to come to work every day. I’ve seen directors do it all different ways, and some of the auteurs wouldn’t be very good producers.

How did you handle the more technical aspects of the job?

The DP Matt Irving and I worked really well together. That was an incredibly fun, brand-new experience. I didn’t go to film school, I got my experience from being on set from a pretty young age, right out of college. That was probably the most delightful part of the learning experience—making my idea, how I wanted it to look and feel in each scene, and then figuring it out with the DP how we were going to make that happen.

What kind of advice did you get from your former collaborators and filmmaker friends?

We’re very good friends with David Chase who created The Sopranos because my husband [Terrence Winter] worked on the show, and David said that during his first directing job he went to the DP and said, ‘This is what I want to do, what do you think?’ And the DP said,  ‘Okay, that’s great, as soon as they develop the camera that can shoot through the wall, we can do that, but until then, let me do my thing and you go stand over there.’ And I was like, oh crap. But Matt was the opposite of that. What was really beneficial was that I developed a philosophy about the movie. Charlie, played by Jackson White, is obviously at cross purposes with Kelsey Grammer’s character at the beginning. During the first half of the movie, he thinks he wants to be on the music studio’s side, so I wanted him very close in the frame to William Fichtner’s character Donny [the studio head] and Paris Jackson’s character Cory. That’s who he thinks he wants. Then I wanted it to transition over time as gets closer in frame to Kelsey Grammer and Julia Goldani Telles. A little too cute by half, certainly, given the name of the film, but it was something that was a guidepost.

Do you feel like shooting in coastal California is also a way to ensure some beauty in your film?

I’d like to say that part of it is well thought out. There was something so great about the schedule because we ended up being the last production to ever shoot at the Viper Room before it shut down. Opening the film with a location like that really helped plant us. Then the sh*t they pulled off with the drones at the beach! We were in Santa Barbara and Montecito for some of the cliff stuff. Kelsey and Jackson really did get into the Pacific and freeze their butts off. The location for his Montecito house was a bit of a gift from God. It was not in Montecito, it’s actually in LA proper, in the Valley, but it was a real llama named Meechu.

You know, there’s that old saw about never working with animals or children…

Totally, but Meechu was a dream, she was really easy to work with.

The ocean shots were both beautifully composed and looked very dangerous, too.

I don’t bite my nails, but I would have been a cartoon character gnawing them off during the water scenes. My whole body was tense. Concern for the actors, concern for the guys shooting, but it wasn’t as difficult as you would have thought. Kelsey and Jackson were so game. Kelsey just showed up totally ready to go, and I think he really wanted to push himself. He signed up for an experience that was the polar opposite of Dr. Fraser Crane, and we gave it to him. I was like a Jewish mother, ‘Are you okay, are you sure you want to do this?’ If that separates me from being one of the greatest directors in the world, because I’m not able to separate the humanity from the job, that’s okay. That’s baked in for me at this point.

So what was it about this story that made you stick with it for so long?

I think about Dallas Buyers Club and Matthew [McConaughey] having gone through that massive transformation. My uncle had been on AZT and died of AIDs, and producer Robbie Brenner, one of my best friends, brought me in to work with her the last six years of the film. You see in today’s world, that has value and meaning. There’s now a law in Colorado called “The Dallas Buyers Club Law.” Movies can make change, so from an outsider’s perspective, you stick with that. You never sign up because it’s going to be awards-y. That’s never part of the thought process. But there was something about The Space Between that spoke to me. I’m a Cameron Crowe, John Hughes junkie girl, so I think there’s something baked into Will’s script that’s so sweet, and his voice was so singular. I’m waking up in the middle of the night still seeing it, playing out in my head over a decade later, that has to tell you that there’s value in that, and just maybe other people want to find themselves in a dark theater being delighted by this, too.

How much of the deep dive into the world of music was in the original script versus what we see in the film?

That’s one of my favorite aspects of this movie and was one of the biggest challenges. Tricia Halloran, our music supervisor, was amazing. My goal was for people to Google Micky Adams after they saw the film, wondering if he was a real guy. To do that, we had to come up with a fake album, and that album had to be f**king great. It had to sound like it was from the 60s and 70s. There are a lot of amazing singer-songwriters from that era we could have approached. We talked about it, and then I said to my husband, I have a weird thought—what if we got an iconic singer-songwriter from the 90s to tap into their original inspiration to write the music for Micky Adams. When I stopped to think about some genius like James Taylor or Carole King, their inspiration is twenty years prior to them. We needed Micky’s inspiration to sound authentic 60s and 70s, and did it actually make sense for someone like Rivers Cuomo to tap into what made him successful in the 90s? The next thing I know I’m sitting across from Rivers Cuomo, who’s the nicest person. Rivers had to write music that also reflected the hope and the fun of the 60s, and then, as Micky Adams transitioned into a darker time in the 70s, a Bob Dylan-y kind of thing. Then Tricia hooks us up with New Monkey, Elliot Smith’s old studio on Van Nuys, and he has a 1970s Trident Board. So we’re basically on vintage equipment, we’ve got the 90s and 2000s band Minibar to be the house band for Micky Adams, it was the most extraordinary thing. Every time Rivers sent me a song, I’d cry. It was one of the most incredible experiences of my life in general.

Featured image: L-r: Director Rachel Winter and Kelsey Grammer on the set of “The Space Between.” Courtesy Paramount.