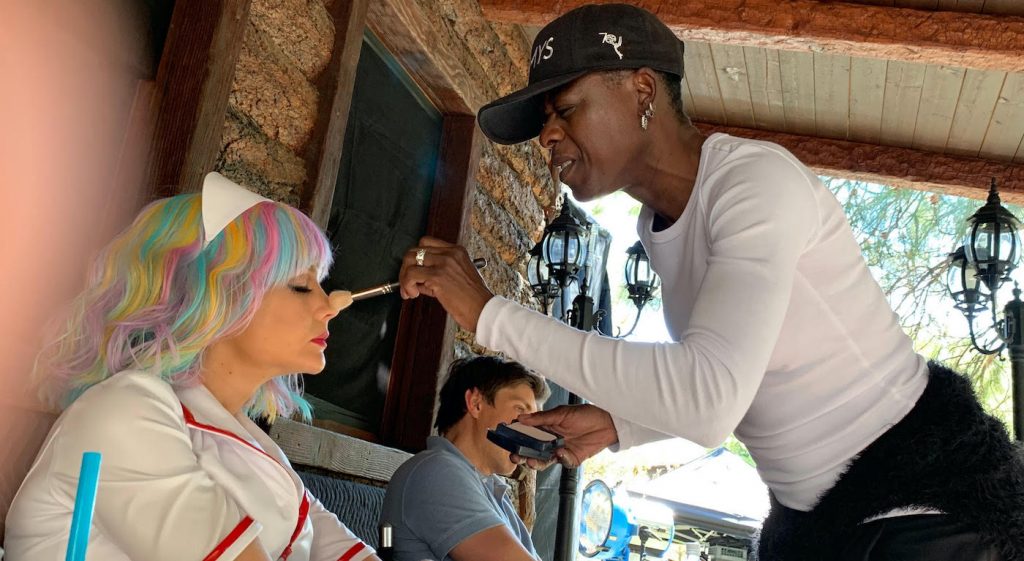 Writer/director Emerald Fennell’s Promising Young Woman delivers a deliciously punchy twist on the revenge narrative. Carey Mulligan stars as Cassie, short for Cassandra, which happens to be the name of the priestess in Greek mythology who was cursed to speak true prophecies that were never believed. Mulligan’s Cassie, however, is a woman who eschews speaking prophecies for becoming them. She’s on a personal mission, fueled by a tragic event in her past, to teach every would-be date rapist a lesson they’ll never forget. Fennell’s vision, and Mulligan’s stellar performance, add up to a kind of modern-day Greek myth that satisfies—who doesn’t want to see creeps get their just rewards save for the creeps themselves?—but also saddens, as many Greek myths did.

Transforming Carey Mulligan into the formidable Cassie, a woman who pretends to be many things she’s not—drunk, helpless, a stripper in a nurse’s uniform—was no small feat for makeup department head Angie Wells. It’s much more complicated than you might think to create the physical manifestations of inebriation, for instance. It’s also no walk in the park to transform an actress into a character that is constantly transforming herself.

Promising Young Woman wastes no time introducing us to Cassie’s unique methodology behind educating men about the perils of their abusive behavior. The film opens with our heroine ferociously drunk at a club—or so it would seem to a trio of ghoul-bros led by Adam Brody’s Jerry, and egged on by Sam Richardson’s Paul and Ray Nicholson’s Jim. Jerry offers the smashed Cassie a ride home. Of course, chivalry is not Jerry’s intention, but no bother, Jerry doesn’t realize he’s a fly buzzing at a Venus flytrap. To his eye, Cassie’s a mess, barely able to hold her head up in the cab, her face a flushed, watery map of makeup gone bad.

“Then, to make her look flush, instead of applying blush as you would when you’re doing beauty makeup, I used a cheek stain,” Wells says, via Zoom (what else?) from her Los Angeles home. “I stippled it on so that it would be blotchy and would create the illusion of flushing, rather than having blush on. Then we added some sheen to the skin by spraying her with some Evian, so she had that sweaty look.” To create the ruined look around her eyes, Wells applied mascara and then had Mulligan close her eyes really tightly so it would smudge, then applied a damp brush and move the mascara around her eyes. “Then we let that deteriorate as she leaves the club. Then she’s in the cab and the window is open and the wind’s blowing, so by the time she gets to the apartment she’s really a mess. Her hair is a mess, the eye makeup has really moved a lot.”

It’s back at Jerry’s apartment when Promising Young Woman and Cassie reveal their true intentions. As Jerry fixes them yet more drinks (he fills hers up to the brim while pouring himself a mere splash) and prepares to take advantage of her, Cassie’s eyes uncloud and her demeanor morphs from abyssal blackout to razor-sharp sobriety. This was the moment in the script that Wells said she knew she wanted to do the movie. “When Cassie does that initial sit-up and says, ‘What are you doing?’ I loved it, I was in,” she says. Thanks to Wells’s work, Cassie also looks appropriately “kinda scary,” in this moment, which is her intent. “This is something for you to think about the next time you try to do this, dude,” Wells says of Cassie’s intention. “At one point she even says to one of the men, ‘There are others like me. I’m not the only one.’ She’s teaching them a lesson to move forward in a different way.”

Yet Promising Young Woman is not a film solely interested in Cassie’s well-deserved revenge. Her life is truly a mess, and her path seems doomed from the start. Wells made sure this was reflected in Cassie’s evolving looks.

“I did want to show was that she was getting sadder, she was getting darker,” she says. “For instance, that scene where she smears her lipstick, when I did that makeup I purposely wanted it to be sad, so what I did was when I lined her eyes, I pulled them down. I did a wing liner but I actually brought the eyes down, which works on you subtly, because when you see someone’s eyes down, they look sad.”

While Mulligan was Wells’s primary focus, there were plenty of other great performers in the film, many of them playing against type. One of those was Jennifer Coolidge, who Wells had to de-glamorize a bit to fit into Promising Young Woman‘s world, which is set, as she puts it, in “Anytown, U.S.A.” That world is one of pinks, chosen by Fennell, which helped give the film its counterintuitive visual palette. “The coffee shop was pink, Cassie’s room was pink, her clothes were pink,” Wells says. “It goes well with Carey’s skin tone, roses and pinks, and mauves. When she’s her normal Cassie, we did a really soft pink lip balm and her makeup was pink, but it was done so softly you don’t really notice it. I wanted there to be a distinct difference between what she looked like when she was Cassie and what she looked like when she was doing her hits, as I call them.”

Wells’s job has changed, as so many have, during the pandemic. “It’s like having two jobs,” she says, of the amount of planning required in safely doing her work. She follows a strict Covid-19 safety protocol, which requires changes big and small to her work, including even how to pack her kit. She credits her education at cosmetology school in making this process a bit easier for her. “In cosmetology school one of the things you learn is that sanitation is really important. Now it’s hyper important.”

As the film builds to its climactic finish, with Cassie taking aim at one of the most overtly misogynistic rituals in society, the bachelor party, she undergoes what is her most visually raucous transformation. Cassie gets herself hired as a stripper and appears in the aforementioned nurse’s uniform, only Wells made sure Cassie’s interpretation was layered with menace. Imagine Nurse Ratched showing up to a bachelor party and you’re halfway there.

“The nurse look, for me, was a combination of a blowup doll with an edge,” Wells says. “I wanted her to have a wide-eyed, big-mouthed look, especially because the wig was framing her face.”

You’ll need to watch Promising Young Woman to see the results of Cassie infiltrating the bachelor party, but regardless of how the film’s uppercut of a third act hits you, you’ll come away reminded of Mulligan’s skill and newly appreciative of Angie Wells’ impeccable craft.

Promising Young Woman is available On Demand and in select theaters.