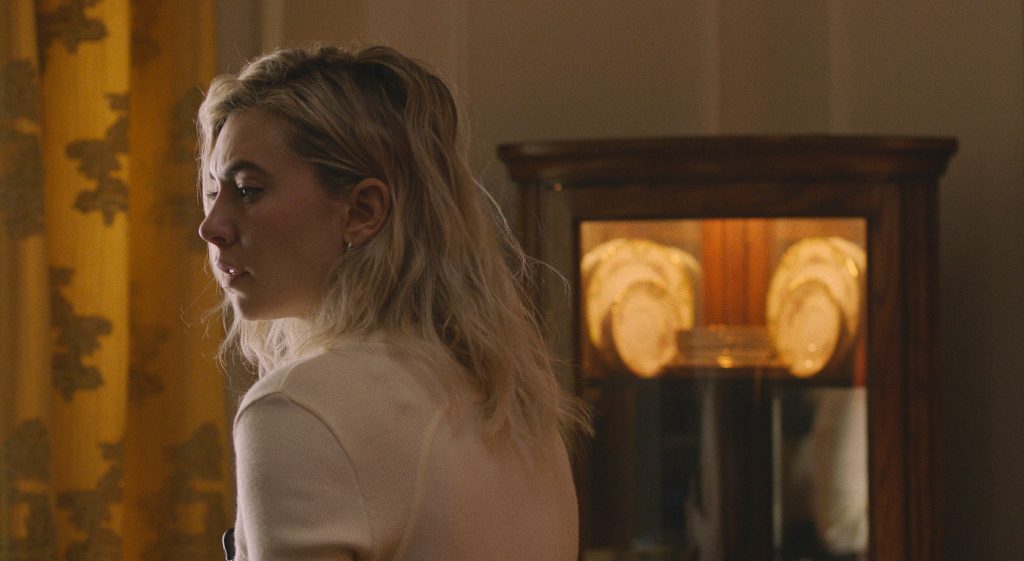 Screenwriter and playwright Kata Wéber wrote Pieces of a Woman as a play before adapting it for the screen in partnership with director Kornél Mundruczó for their first English language film (premiering on January 7 on Netflix). Their last film was the award-winning White God, and the two have had both a long creative and personal history together. This story of Martha (Vanessa Kirby), a mother grieving the loss of her newborn child, is deeply personal to them both. The Credits spoke to Kata Wéber about her inspiration for the film, the universality of the subject, and the power of art to heal.

You’ve said for women who lose their children in utero or at birth, “the person we are most connected with in the world is not present,” which is a uniquely female experience. Society’s perception that motherhood is essential to being successful as a woman feeds into the grief and guilt of losing a child. How is that reflected in Pieces of a Woman?

I wanted to talk about the whole emotional reality of someone who loses a child. I know I wanted to deal with it because this is a kind of taboo. I also the isolation that this kind of experience creates around women. I wanted to dispel the centuries-old consensus regarding the appropriate way to grieve, so with this story, I wanted to talk about someone who had a complicated bereavement process, and explore the family background and story of a wife and husband, and explore an environment in which survival is a huge issue.

This is a family with a lot of trauma in their backstory, too…

I put it in a family with a Holocaust background to consider if we pass, from generation to generation, the pattern of how to deal with tragedy, and if this kind of pattern can be broken. I think my story says you have to find your own way to grieve. There is no recipe. These kinds of moments create a way to better ourselves, and in our story, Martha has to find her own path and her own honest way. Through this, she finds her own voice and a better understanding of herself. It’s a challenging story, but it is a challenging thing to go through such a loss. I wanted to talk about it because I have a very personal connection to these stories, and I wanted to break the silence. By writing it down, I myself also somehow felt I am breaking my silence around it.

The immediate aftermath of loss is this limbo where you’re caught between life and death, because you’re halfway here, and halfway with the person who isn’t here anymore. You really captured that in a very powerful way with Martha and how time for her stands still. There’s this landscape that exists apart from everyone else.

Very much so. That was my point with the writing. You can see it with the drama, because there is a lot of conflict in it, but at the same time that was not the most important thing. For me it was how to express the absence of the unborn, and how to express this magnetic longing, and this connection with the child who is both there, and not there. This kind of landscape where everything is so blurry, and your biggest magnetic love is for someone who is not there. During the writing, I always wanted to share the space with the unborn child as if he or she were there. It is living in this unknown territory of someone’s soul, and there’s this transcendental feeling of living in this in-between existence somehow. It was the most important aspect that was part of all the conflicts that exist for the family, this emptiness that is present in the space.

Can you talk about this artistic partnership with Kornél Mundruczó, how the screenplay developed beyond the stage play?

We have known each other for 21 years now, so our collaboration is pretty fruitful but has had many different stages. I’ve worked with him as an actress, and as a co-writer for theater plays, then our first collaboration in film was White God. This one is very different from all those, because this comes from our personal experience.

I was invited to write a second or third play for a Polish theater we’d been working with for a few years and at the time a pioneer midwife Agnes Gereb had a trial case in Hungary. The whole society was shaken from the story. It was midwives against hospitals, home births against doctors. It was really emotional. I thought I should write about this, because it was clear to me this was about a lot of taboos. Then when I started to write down my notes, and I talked to Kornél about whether I should follow this path, he immediately understood that this was something personal. I didn’t. He told me to go deeper than just the topic itself. He didn’t say this was about me, but it was very obvious that this was about something we couldn’t talk about. I lost a child during pregnancy. I couldn’t deal with the loss, and I had a lot of feelings. I felt very isolated. We as a couple literally never talked about it. I think while I was writing it down and exploring the scenes and the arc of the story, I felt it was a kind of therapy. I became very emotional and put some aspects of it, although it’s very different from what’s in the film so I should not and I do not want to compare, but I did a lot of research and talked to several women who dealt with loses, and I felt a deep connection. While I was working on it, it made me able to talk about it with Kornél, and now I think we have arrived at a different place together. I can talk about it now, and I think I needed this project to rediscover myself through it.

Catastrophic loss is the club nobody wants to join. One always recognizes others in the club. What did you want to shine a light on in terms of the universality of this story of loss?

I agree about that, but also it’s something that ultimately no one can avoid. In our lifetime we will all face these extreme losses in one form or another. I really would love if this film could allow people to talk and just find a way to communicate about these experiences. Breaking the silence is the most important message of the film, and I hope we manage to create a better understanding.

Pieces of a Woman is in select theaters and streams on Netflix beginning on January 7th.