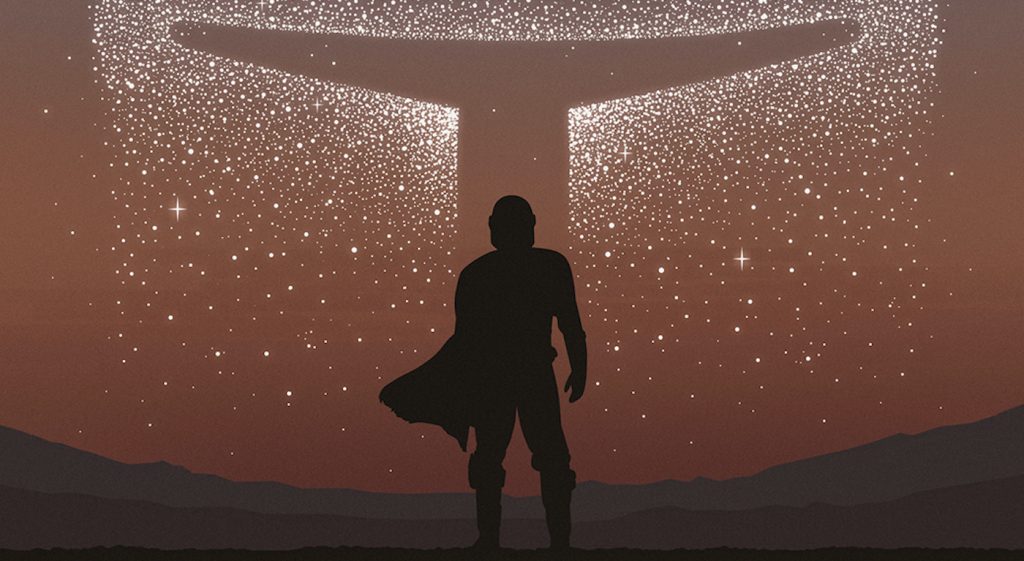 A Poster Designer’s Career, From Tribute Art to Marvel to “The Mandalorian”

Social media might have more downs than ups these days, but even with its troublesome aspects far outweighing the good, you can still find heartwarming examples of social networks serving their original purpose: bringing together like-minded individuals over niche shared interests. For hobbyist movie poster designers working at a professional albeit non-commissioned level, finding the right community can even launch a career in the film industry.

Formerly a graphic designer working at an agency in Hannover, Germany, the professional poster designer Eileen Steinbach got her start in the industry by posting tribute work on Tumblr, then moving over to Twitter and Instagram, where she discovered and became a part of an entire scene of people making high-level alternative film posters. About a year and a half in, the hobby turned professional, when requests started coming in from independent filmmakers, followed by studios like Disney and Marvel.

Today, Steinbach estimates that 85-90% of her design career is making movie posters and other key art for films. She works with an artist collective as well as agencies in Los Angeles, New York, and London, which commonly seek out freelance talent to add to their employee roster in order to give studios a bigger range of creative options. After all, even with the film industry in a state of continuous upheaval thanks to streaming’s growing market share, the concept of the movie poster remains eternal, whether it’s part of a digital header on Netflix or pasted under a marquee. Even Martin Scorsese collects them, defining the urge as a way to own a part of film, whether you made the movie or not. We had the chance to speak with Steinbach about transitioning from tribute art to commissioned posters, the difference in working with independent filmmakers versus major studios, and the value in continuing to create work just for fun, no matter how many commissions she lands.

How did making alternative posters lead you to making the official ones?

I started four or five years ago. I was working a normal agency job, happy, but not entirely creatively fulfilled there, and I started creating my own versions of posters for films that I loved. Maybe for films that didn’t have the prettiest of posters — because obviously that’s a problem these days. I created my own versions and dropped them on, back in the day, it was Tumblr. They got a little bit of attention and people liked them. Then I did something for a little film called Kill the Messenger, and that one actually got picked up by the media. I think there was no key art yet anywhere. They used my poster as the official one in pretty much all the coverage, which was weird. I was a little worried. [You wonder,] I wasn’t hired for this and now it’s on IMDB, what am I doing? Am I going to get sued? That’s the other side of things — you do something out of passion but it’s not officially your work. I wasn’t sued and I wasn’t contacted by anyone, so that was good.

What was the first major studio to reach out to you, and for which film?

I became a member two or three years ago of the Poster Posse. We’re a collective of artists from around the world. Basically what happens is the big studios approach them, because these days, they love working with agencies and they love working with a lot of different people. The Poster Posse curates who would be good, and the studio picks the artist they like. The first big one I worked on was a marketing piece for the Tim Burton version of Dumbo. No, that’s not true, that was the second one. The first one was Captain Marvel. But they were pretty close together. That was terrifying. The [studios] share your work with credit on all their social media platforms, and that’s quite a lot of people who suddenly get to see your work. With the Dumbo piece, I was fortunate enough that they even made prints, and they were given out at the [Disney theme] parks as a nice little giveaway to promote the film, which I thought was awesome because I could see people with my print running through Disneyland and taking pictures with it.

Does working on tribute art versus an official commission affect your creative process?

The approach is technically the same, but with official art, obviously, you have a client. So there are rules. There’ll be legal stuff, so there needs to be a certain size for all the writing, the title treatment, the billing block, it’s in contract, it has to be a certain size, and so on. There are rules when it comes to likeness. You can’t show faces. With my minimalism, it’s pretty easy because it’s not what I do, anyway. But likeness is usually a big problem for people just because you have to get permission from all the actors. The creative part itself is the same, it’s just a little more challenging when it’s an official job. It’s like the playing field is a little more limited than it is with the tribute posters.

How much information are you given beforehand, particularly with major studio films?

Usually, it’s just trailers. I didn’t know anything about Fat Thor in Endgame. That’s why he’s a very thin Thor on my posters, because I didn’t know. It’s too risky for them. I did something for The Mandalorian, and I didn’t know anything about Baby Yoda, just like everybody else. Which is sad! Because all the art that is coming out now is so cute and so awesome, but we just didn’t know. The smaller the production, the more info I get. All the indie films I work on, I usually get to see the whole film. They send me a screener, I watch the film, we create something based on that. But obviously the bigger it gets, the more unlikely it is that I see anything, really.

Physically speaking, how do you create your work?

I do work completely digitally, on a Wacom drawing tablet, so you draw directly on the surface. That’s pretty much 90%. I do work directly in Photoshop and Illustrator, putting together my files in InDesign. There’s different software, but mostly Photoshop. It’s all Adobe products, they are kind of the monopoly for that one.

Do you have a favorite poster from your commissioned body of work?

Probably the Danseur poster that I did. It was a pretty small project, but a very important one in my opinion. I worked with the director directly, and he trusted my work so much I just presented him with three, four ideas and he just picked one. That doesn’t happen often. It’s a very striking image of a boy because it’s about boys in ballet being bullied. Not only do I really like how the visual turned out, but I also loved the message of the film, which I always try to consider. I don’t want to put my name on something I truly don’t believe in.

I treat my social media as a portfolio. With my tribute posters, I just try to show what I want to work on. So if I do some Netflix titles, I’m saying ‘hey Netflix, hi!’ as an individual artist and not as a part of an agency. There are examples of poster artists who have made a name for themselves as individuals. There’s Akiko Stehrenberger, who is the biggest person in poster design, I feel like. She comes from an illustration background. She works with Netflix and the like, and they work with her because she has her style. I feel like a lot of poster artists are aiming for that, to be approached by the studios directly, by the directors directly. I talked to a whole lot of Hollywood people via Instagram or Twitter, people who approach you. I talked to Jonah Hill because I did a mid90s print and he was like, oh, can you send that to me? And he kindly sent one back signed and everything. That happens too. That’s why I’m always advocating for social media, as horrible as it is. It’s destroying people, I get the whole negative side, but work-wise it never has been this easy for people to get their work out and in front of people who created the content.

For another poster artist plying his trade in the film industry, check out this piece on Steve Chorney and his work on Quentin Tarantino’s Once Upon a Time…in Hollywood.