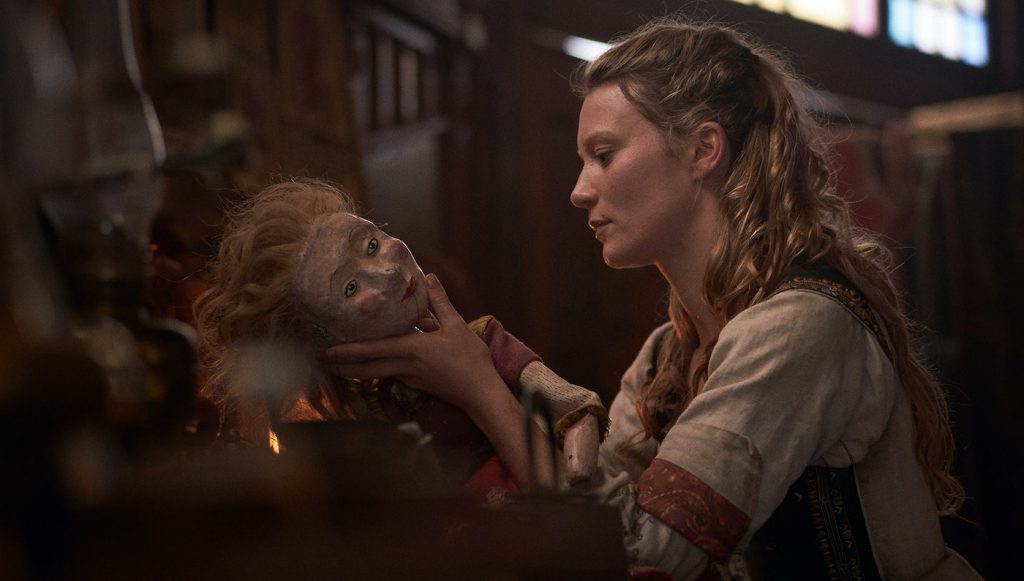 Judy & Punch kicks off with a male marionette thrashing a female doll-on-strings as a crowd of 17th-century tavern goers roars with delight. The camera soon shifts to witches, hangings, infanticide, beatings, magic brews, and lies as filmmaker Mirrah Foulkes bloodily re-imagines how the western world’s most famous pair of hand puppets got their start.

Set in and around an English village shortly after the Bubonic Plague, Judy & Punch (June 5, digital download available here) casts Mia Wasikowska (Alice in Wonderland, Alice Through the Looking Glass) and Damon Herriman (Dewey Crowe in TV’s Justified) as the doomed title couple whose lives fall apart before they get a chance to conquer Ye Olde Show Business. The script comes courtesy of director Foulkes, who worked mainly as an actress before teaming with Vice Entertainment on the short film Dumpy Goes to the Big Smoke and this subsequent collaboration.

Filmed entirely in Australian, Foulke’s darkly fantastical debut draws on a quirky score from composer Francois Tetaz and costumes by Edie Kurzer (Picnic at Hanging Rock) that outfit even the most wicked characters in dandy capes and caps. Judy & Punch wowed crowds at Sundance and last fall picked up nine nominations, including Best Picture, from The Australian Academy of Cinema and Television Arts. On lockdown in her home down under, Foulkes spoke via Zoom about her modern movie about ancient entertainment.

How did you come up with your take on the infamously violent puppets Punch and Judy?

When Vice Studios brought me the project, I landed on the idea quite quickly that I wanted to make a revisionist origins story. It takes place at a particular time and place, 17th century Europe, but didn’t want it to be historically accurate. I wanted the film to feel like a world-building exercise where I could break rules when needed and not be historically accurate.

The film portrays violence against women in ways that seem to resonate in our current cultural climate.

Given Punch and Judy’s violence and misogyny, there’s no way you can look at this story without examining that through a contemporary lens. My idea of putting it into this historical context was partly about having the freedom to play around with contemporary parallels as seen through the prism of this almost fantasy world.

Before you started the project how much did you know about the Punch and Judy puppet tradition?

Not much. I knew it had these stock characters and that it was very English, but I didn’t know Punch and Judy was derived from Italian Commedia dell’ Arte, which I uncovered in my research. I really wanted the movie to play well for audiences who don’t have any background knowledge about Punch and Judy.

This is your first feature-length movie. What was your biggest challenge in doing something of this scale?

Logistically, Judy & Punch was a short shoot with limited resources and a lot of moving parts—animals and kids and set pieces. But the most difficult thing for me was making a film that treads a very delicate tonal line. In a sense, Judy & Punch is sort of like total tonal acrobatics.

You juxtapose tragedy and comedy, for example in the sequence where a “baby”—clearly a doll—sails out the window to her death.

Totally. It’s the most slapstick sequence in the whole movie, followed by the film’s most violent moment. I’m trying to take the audience on a ride that leaves them questioning something they’ve just laughed at, as a way of examining what it is that we find enjoyable in terms of entertainment. It’s tricky but also weirdly fun because comedy and tragedy often are so close anyway.

Your stars go a long way in selling these different moods, especially Damon Herring as Punch, who behaves very badly throughout the film.

Mia seems well suited as the resilient Judy since she’s often portrayed formidable characters in films like Alice in Wonderland and Crimson Peak.

Mia has one of those remarkable faces that’s endlessly compelling, even in stillness. She’s much more of an intuitive actor, and emotional, like me, approaching character from a very instinctual place. So Mia and Damon are sort of polar opposites in the way they work, but I think their chemistry on screen is fantastic.

The film’s closing credits play over old archival footage of school kids freaking out as they watch an old Punch and Judy puppet show.

That footage defines the very fine line between laughter and tears that children demonstrate so readily, which is essentially the same kind of reaction I hope to elicit from our audience for Judy & Punch. Something can be frightening and also totally delightful. It’s why pop culture has such an obsession with violence, isn’t it? There’s something very dramatic about it.

You belong to the Blue Tongues Film Collective, whose members have directed movies including Boy Erased and Animal Kingdom. What’s it like being part of this group?

We’re a bunch of mates that work on each other’s stuff and spend a lot of time on each other’s sets. I started out acting in their shorts, and now that I’m directing, I’ve gotten incredible support. David Michôd is a member of the Blue Tongues and my boyfriend as well, so just being able to watch him go through the process of making a film four times has been great. I never went to film school. For me, getting to hang on their sets and watch these guys work has basically been my film school.

Early in the movie, Judy asks Punch why their puppet show keeps getting more and more violent.