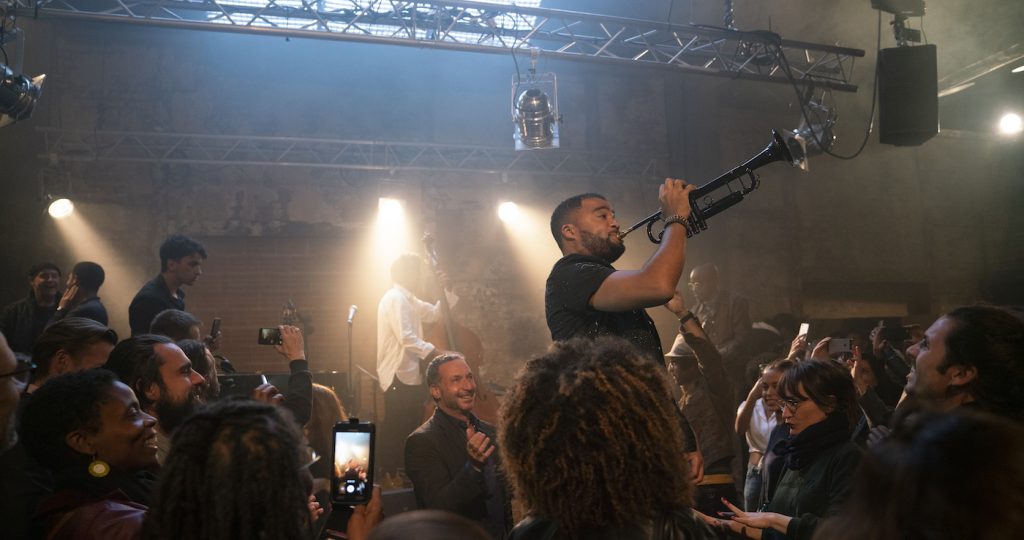 Contrasting the difficult lives of professional jazz musicians with their joyous, airy music, Damien Chazelle’s (Whiplash, La La Land) new Netflix series The Eddy turns on the personal and professional drama surrounding a titular jazz club in Paris’s down-to-earth 19th arrondissement (premiering on Friday, May 8). A legendary jazz pianist, it’s Elliot’s (André Holland) job to run the struggling club’s musical program until he unexpectedly inherits a backstage mess from his business partner, Farid (Tahar Rahim). As Elliot’s troubles with the police and the Paris underworld mount, compounded by the arrival of his nightmare adolescent daughter, Julie (Amandla Stenberg), the show also zeroes in on the plight of the club’s band members, all suffering their own personal woes. Homebound Francophiles expecting shots of the Eiffel Tower and strolls through the Tuileries should look elsewhere—The Eddy’s creative residents battle issues like addiction and loss among Paris’s mid-century apartment blocks, banlieues, and diverse, lightly touristed districts. Here, the city’s beauty is to be found in gorgeous, exuberant jazz which this motley crew nightly sets aside their troubles to perform and which Chazelle and the rest of the series’ directors (Houda Benyamina, Laïla Marrakchi, and Alan Poul) let run for luxurious minutes at a stretch.

So while The Eddy won’t take its audience for a spin through touristic Paris, it offers something even better: a home viewing experience of sitting front row in a hip French jazz club. Despite the show’s shooting locations in the outer 19th and 20th arrondissements and outskirt neighborhoods like Bobigny and Montreuil, after discovering an abandoned cinema in the city’s trendy 12th district, production designer Anne Seibel (Midnight in Paris, Paris Can Wait) made an unintended move a touch closer to the city center. Besides letting her directly connect the club’s interior to scenes shot on the street, in the former theater she was able to design a fully acoustic club where the composer Glen Ballard’s sets could be recorded live.

“What was interesting was when there were 120 people there, they said oh, we’ll come back to this jazz club, because it’s really nice here,” the designer remembers. “For me, it was nice, because they didn’t see it was a set!” Sharing a love of jazz with Chazelle and many of the same cultural references from the genre, Seibel set about creating the director’s vision, “something like an old jazz club you’d have in underground New York, with a mix of French La Gare,” a real Parisian club referenced in the show. The result is a hyper-cool, barebones space that puts composer Ballard’s brilliant original work front and center.

Outside the club, The Eddy introduces foreign viewers to areas of Paris historically less trammeled by film crews. Shooting in the cités, or Parisian suburbs known for their affordable housing blocks, the production worked with neighborhood locals to keep an eye on things in terms of safety. “For Americans, they always want to see the Eiffel Tower, they want to see Montmartre, they want to see the riverbank,” Seibel says. “We created the riverbank, yes, but we went on the other side of the nice Louvre area, the more populated side where there is this old warehouse, lots of graffiti, tags, things like that.”

Back in the city center, even for an American transplant and successful musician like Elliot, Paris rents are prohibitive—though he’s the only main character to get Haussmann-style digs, his square meterage in gentrifying Belleville is hardly grand, especially after 16-year-old Julie shows up in need of a bedroom. “The jazz musicians, they always struggle,” and the designer asked a contact from the jazz world “if he could help me by introducing me to the young jazz musicians of Paris, and if I could have some idea of how they live,” Seibel says. Among the show’s couple dozen characters, the only truly august home is that of Farid’s wealthy parents, whose lives are deeply inimical to their club-owning son and Amira (Leïla Bekhti), his long-suffering, pragmatic wife. These two plus their young children Seibel placed in a spacious if rundown house in the suburbs which, like a lot of The Eddy’s interiors, niftily walks the line between bohemian and derelict.

Thanks to Farid, Elliot’s woes get worse and worse, while the storylines of his sympathetic musicians reveal hard truths about the contemporary lives of Parisian creatives. But the real star here remains the jazz nights at the club, and when tragedy strikes the physical space, it delivers as much of a gut punch as any of the disasters and disappointments confronted by the show’s human characters. “When the music started playing, I felt I didn’t want to go,” Seibel says. Neither will The Eddy’s audience.

Featured image: Live music was recorded in the very club the scenes were set in ‘The Eddy.’ Courtesy Lou Faulon/Netflix.