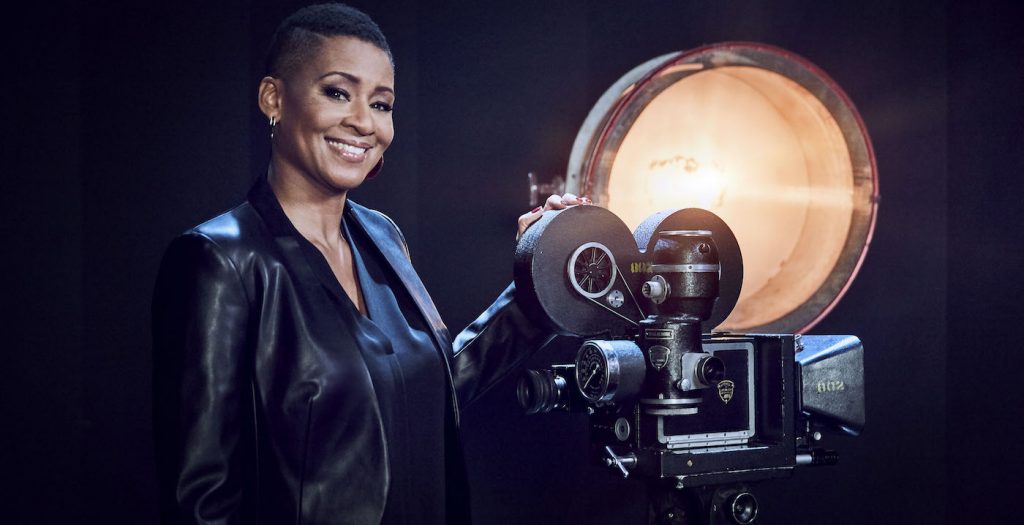 Jacqueline Stewart is a film scholar, researcher, author and archivist. But when she gets before the cameras as the host of Silent Sunday Nights on Turner Classic Movies (TCM), she’s once again a kid watching movies late into the night with her aunt Constance.

“I was obsessed with Fred Astaire and Ginger Rogers movies as a kid. They always seemed to be on TV the week between Christmas and New Year’s Eve, late at night. I was totally captivated not just by the dancing but by the set design and costumes. I was intrigued by the rhythm and the banter between the characters,” says Stewart, who grew up in Chicago.

“My aunt Constance loved movies; she was born in the 1920s and grew up going to see all the classics. She was a night owl so the two of us would be the only ones awake in the house and she’d talk to me about her love for Lauren Bacall, Bette Davis, Joan Crawford. Her enthusiasm rubbed off on me,” says Stewart. “I’ve come to appreciate that more and more. This was an African American woman who was growing up in the ‘30s and ‘40s. Life was not easy. The movies were certainly a place for escape but I appreciate how women could feel a real identification with stories about other women. There was an emotional connection my aunt was making that was valuable to her. I think about that a lot when presenting these films.” Stewart is the first black host in TCM’s 25-year history.

Considering we’re all pretty much currently confined to our houses and apartments due to the spread of COVID-19, film lovers could hardly do better than Stewart’s late-night show, which airs on Sunday nights at midnight, E.T. Stewart’s expertise and down to earth manner make it easier for new and younger audiences to appreciate and understand what’s perhaps one of the more challenging forms of classic cinema: the silent film. During her programs, she provides both seasoned cinephiles and newbies with background information and lively historical context to silents that range from early comedies from Buster Keaton and pioneer Mabel Normand to Robert Flaherty’s Nanook of the North (1922) about the harsh life of an Eskimo and his family, which airs March 29. “What I love about the silent era is that it’s an incredible mix of styles because it is a period of really dynamic experimentation with this medium,” she says.

“The TCM team has been incredibly welcoming and encouraging to me, someone who does not come from a performing background. What I love is that I get to be a professor but in a much bigger classroom.” She adds that TCM has always aimed to make audiences feel at home — the sets are like stylish living rooms  — so viewers feel that they are among friends and not in a lecture hall.

“It’s a way for the host to mirror the love we have for the films with the viewers’ love for them. There is something intimate about the connection and sharing this love of cinema,” says Stewart, a professor in the Department of Cinema and Media Studies at the University of Chicago, specializing in the history of African American cinema from the silent era to present.

She is also a three-term appointee to the National Film Preservation Board (NFPB), which advises the Librarian of Congress on policy. She also Chairs the NFPB Diversity Task Force working to ensure the films chosen for the National Film Registry reflect diversity and inclusion.

TCM has always been committed to showing silent films and Stewart says she “works with the team to think about a mix of films. I make suggestions. It’s almost like creating a syllabus.” Besides classics and historically important movies, she promises “to bring to the table some unexpected things. This spring we’ll be showing The Jazz Singer [from 1927] which we think of as the first sound film. But most of it operates as a silent film with intertitles then moments of music and dialogue in synchronized sound. To air this film on Sunday nights shows the transition from silent to sound filmmaking and how radical that was.”

“I’m so glad you mentioned ‘Nanook,’ for example,” she continues, “because that’s a film I’ve been interested to show on TCM because it’s so important in terms of the history of filmmaking and the origins of documentary and ethnographic film. It was made for movie audiences and shown in theaters. It helps us to see how many different kinds of cinematic storytelling were being developed in cinema’s first decades and we have so few moments in the current media landscape to pause and appreciate what these previous generations of filmmaking were like.” In the months ahead, she’s enthusiastic about introducing TCM viewers to The Scar of Shame (1927) which she describes as “a race movie by the Colored Players of Philadelphia and one of the most aesthetically ambitious and accomplished films of the race film movement.”

Stewart’s enthusiasm comes from the deep passion for movies that she shares with TCM’s loyal audience. “I’ve been watching TCM for years and years and it has always been an important place for me to see films. It’s so exciting for me to add my expertise to that,” she says. “I hear the most encouraging, positive responses from TCM viewers because they love gaining deeper knowledge about the films they love.”