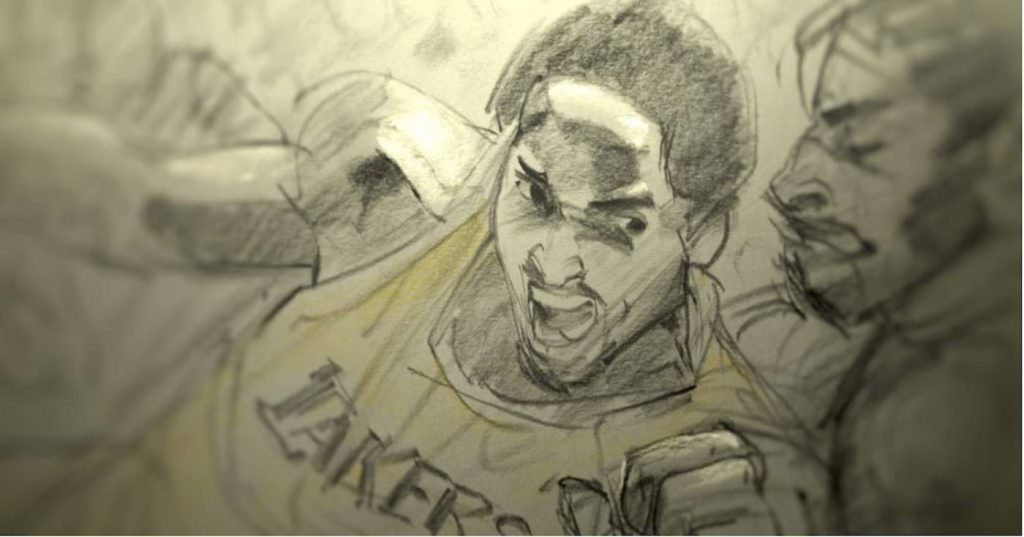 In light of the tragic news of the death of NBA legend Kobe Bryant, his daughter Gianna Bryant, 13 (the second oldest of Bryant’s four daughters with his wife, Vanessa), and seven other people in a helicopter crash in California, we are re-posting this interview with animator Glen Keane, who worked with Kobe on their film Dear Basketball, which ultimately earned them an Oscar for Best Animated Short Film.

In this second of a two-part interview with veteran Disney animator Glen Keane, creator of such beloved characters such as Ariel in The Little Mermaid and the Beast in Beauty and the Beast, discusses what went into his latest solo project – the Annie-winning and Oscar-nominated short Dear Basketball.

Were you into basketball? I read somewhere that you would sometimes sketch your son when he played basketball.  Have you participated in many sports or hung out with athletes? Did meeting and getting to know Kobe surprise you in any way?

I’ve always loved sports. When I was 18 I had a choice to play football for Arizona State or go to art school. Football was something I loved but creating art was something I could not imagine living without. I often sketched Max playing basketball in high school, but unfortunately, my skills on the football field never translated on the basketball court. When I met Kobe I told him, “You’ve got the worst basketball player on earth animating you!”  He told me that he didn’t mind at all because that made me a blank slate and everything I was going to learn about basketball would come through studying him. He was right. We sat side by side and analyzed frame by frame YouTube highlight reels of Kobe’s greatest plays. What really surprised me about Kobe was his gentle and quiet spirit. I had seen the Mamba come alive on the court, but the person I was collaborating with was entirely different. He is very soft-spoken, intelligent, and reflective. I realized that his greatest skill was not in his athletic DNA but was in his thirst to learn. This is what made him great. This is at the heart of Dear Basketball.

What was the biggest challenge with Dear Basketball? What did you achieve that went far beyond simply showing Kobe Bryant’s greatest hits on the court?

I did not realize when I started storyboarding Dear Basketball how cinematic the poem was. It has a clear three-act structure. There is a clear drive in the first act of a 6-year old boy who has a dream to be a Laker. The second sees him working towards that dream and attaining the pinnacle of success. The third moves into the death of that dream as his body can no longer maintain the rigors of pro basketball. But there is a resurrection as we see little 6-year old Kobe has been there side-by-side with adult Kobe all along. Together they will move into the tunnel of light to follow the path into their next dream — which happens to be storytelling through film. The film Dear Basketball is the beginning of that new dream. 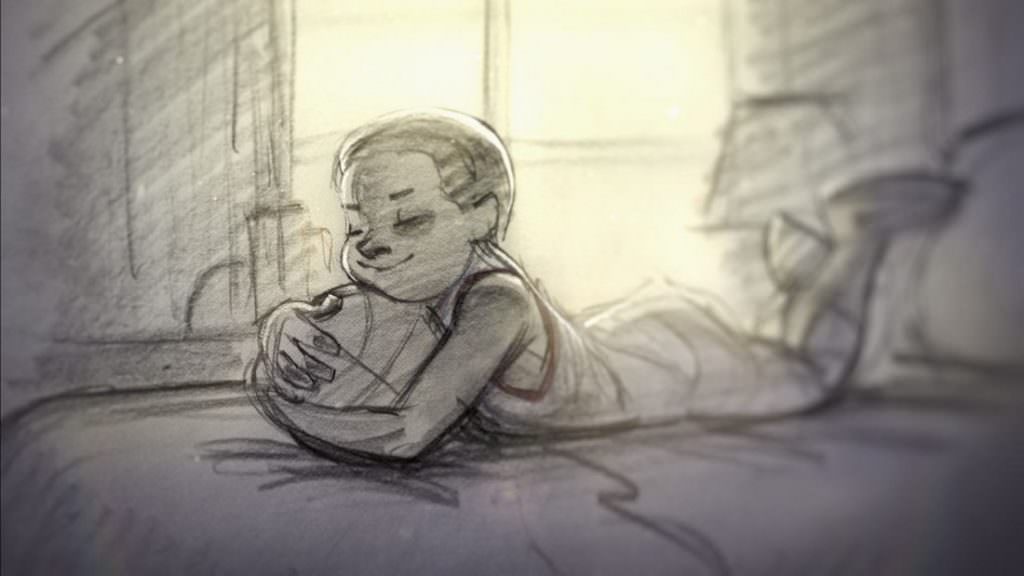 Is Kobe’s love of basketball and what the game provided for him anything like your love of drawing, inherited partly from your dad, and what your career has provided you? When did you fall in love with the cartoon biz?

I immediately related to Kobe having his father as a model for his career. My path was set before I can even remember, just as it was for Kobe. Kobe lived and breathed Basketball, accompanying his dad to the court for practice, rolling his dad’s tube socks as mini basketballs to shoot in his bedroom. My dad had his studio attached to the house. So I had a live-in art teacher.

It took nine months to produce this five-and-a-half-minute short. Yet it can take five years to make an animated feature, so it isn’t that far-fetched. What took the most work to get right? What segments are you most proud of. I did enjoy the pops of Lakers purple and gold.

One of the biggest challenges I confronted was drawing Kobe. He is not an imaginary character like the Beast. It doesn’t really matter how I draw the Beast because the audience will accept whatever version I create. However, the world knows Kobe’s face, and he is remarkably difficult to draw. He has very refined features and it is easy to get it wrong. I always look forward to diving into a new project and discovering a whole new world. As I analyzed Kobe in action, I realized he is a magician on the court, making his opponents believe that his intentions are one direction when all along he is planning to go the opposite way.  I did not anticipate what should have been obvious—that I would have to draw not only nine other players on the court in moving perspective but also the Staples Center itself. We got around this by only drawing suggestions of everyone else other than Kobe. He became the point of interest and everything around him faded off in importance. Max created space and depth and suggestions of the crowds in the stands. He added a gold tint to the film that gave it a nostalgic feeling of memory. We added only touches of purple as needed. Everything was intentionally understated as Kobe’s narration was delivered in a very sincere, uninflected fashion. It was less of a performance and more of a reveal.