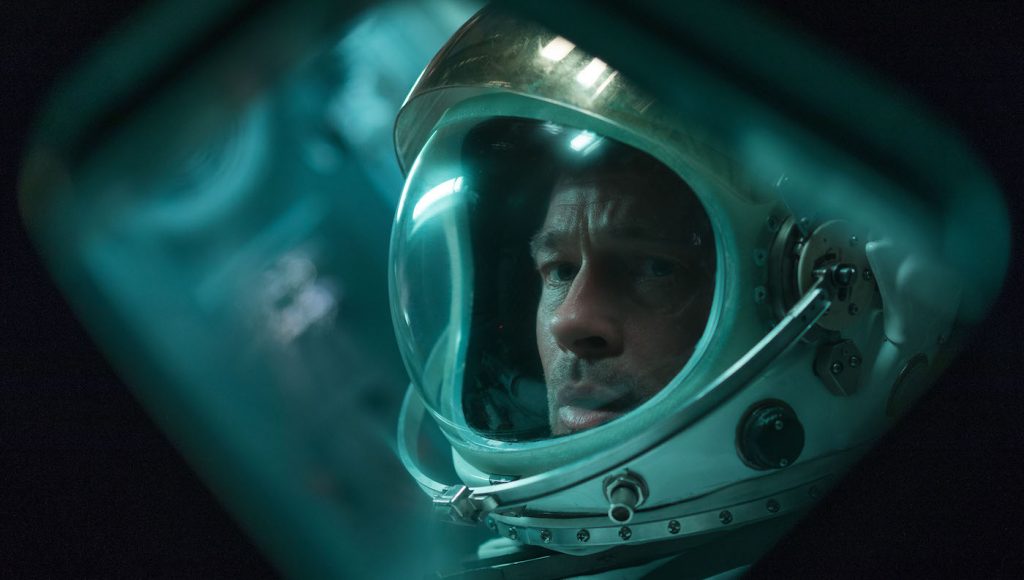 On Tuesday we published the first part of our conversation with Ad Astra editors John Axelrad and Lee Haugen. Director James Gray’s film (which he co-wrote with Ethan Gross) is the rare intimate epic. It involves some of the most breathtaking sequences in any film this year, as well as a very personal father/son story in which our hero, Brad Pitt’s astronaut Roy McBride, travels all the way to Neptune to face dear old dad Cliff (Tommy Lee Jones). Cliff was a legend; an astronaut and cosmic explorer who ventured out on a one-way mission in order to find extraterrestrial life in a mission called Project Lima. Then things went bad. Very bad. By the time Ad Astra begins, energy bursts start decimating Earth and Roy is told that their source is Neptune, and the entity responsible isn’t some catastrophic intergalactic weather but Cliff himself.

In the first of our interview, we talked about three specific scenes: the thrilling opening sequence in which Roy nearly dies in a fall from a colossal space antenna when the first energy burst hits; the moon rover chase in which Roy’s trip towards the dark side of the moon is intercepted by space pirates; and a scene where Roy boards a spacecraft that had sent out an SOS signal because it’s been overrun by—wait for it—murderous baboons.

These were Ad Astra‘s most obviously thrilling scenes, but hardly the only ones that popped. In one such sequence, Roy needs to sneak onto the Cepheus, the spaceship before it takes off for Neptune. The way that he does this (thanks to a little help from a friend, played by the always welcome Ruth Negga) is by swimming through a subterranean lake in order to access a hatch near the ship and sneak himself onboard. Yeah, it’s not easy, yet the sequence is more than just an opportunity to witness a little moon-based derring-do; it’s also deeply symbolic.

“The whole film itself is steeped in the idea that the further we venture out into space, the deeper we dive into the subconscious moment, and so that scene when Roy is climbing onto the rocket is more like a dream sequence than an actual possibility, at least to me,” says John Axelrad. The sequence is irrefutably dreamlike as Roy pulls himself through the lake towards the ship. “I feel like there’s a lot of dimensions to this. Diving into the water, why is he doing that? Technically it’s the coolant underneath the rocket,” Axelrad says. “But you can look it at symbolically, he’s taking a deep dive into the subconscious. When we dream we develop superpowers. So he emerges and scales the rocket, all to reach his father. To me, that was the intent to the scene.”

“One of the things I’ll specify is my favorite transition in the entire film is when the water slowly goes down and we see this amazing shot of Roy coming out of nothingness and coming into the light,” Lee Haugen says. “Roy’s running towards us, towards the rocket, and it’s one of those instances where it’s just amazingly beautiful.”

Once Roy breaks onto the Cepheus he tries to tell the astronauts on board he’s only there to help them safely make the journey. They’re not buying it. What ensues is a glorious zero gravity fight.

“This was a really fun editorial challenge for us,” Axelrad said. “What they did is they shot the fight scene both vertically and horizontally. It took about a week for them to shoot it, and John and I would get pieces of it, all of the horizontal, hand-to-hand combat, and then the vertical shots with the wirework. It came together fairly easy, the performances by the stunt doubles were great, the performances by Brad and the actors were great. We had to composite a couple of things together from the vertical set, but it was all practically done.”

It was yet another example of Gray conceiving of scene you haven’t quite ever seen before in any space movie. The same goes for the way Roy’s trip to Neptune, and Neptune itself, was filmed. The vast expanse of space and the maddening isolation of such a journey was made evident by the way Roy’s ship is dwarfed in the frame. The infinitesimal size of Roy and his ship compared to the surroundings is made clear, but so, too, is heart of this journey made readily apparent.

“If you take the dream analogy, we’re deep into the subconscious on this journey,” Axelrad says. “James’ intent was to make this a very lyrical and poignant part of the film, the trip to Neptune, and make it hauntingly beautiful. The whole journey and then boarding the Lima Project was meant to be almost a little bit of a dance or a ballet. The arrival on the Lima Project, seeing these memory fragments of his father, these are the bits and pieces that help Roy put everything together.”

Neptune, as depicted in Ad Astra, is the most beautiful planet I’ve ever seen on screen. There was a good reason Gray and his co-writer Gross chose it.

“Neptune is the only other planet besides Earth that has a blue hue, so there’s something purposeful about choosing Neptune to resemble Earth,” Axelrad says.

“Another thing to add, what James has created and constructed here is that you may expect something to happen [once Roy reaches his father’s ship], but you’re not sure what it will be,” Haugen says.

Once Roy boards the Lima Project, he’s suddenly within a few feet of the father who abandoned him all those years ago, a man who chose literal deep space over his family. Yet Cliff’s first line is not what you’d expect.

“I feel like this film that gives you something that’s not totally expected,” Haugen says. “Even just the introduction, I love Cliff’s line, ‘Roy is that you? I can’t see very well, I’ve got cataracts.’ I’d never expect someone to say that to their son after not seeing him for 20-years, but it tells you what his mental state it.

“There’s a lot of [Joseph] Conrad here, Homer, a son confronting his father, but it’s not meant to be taken so literally,” Axelrad says. “The intent is almost to hypnotize. That’s what we were going for in the editing. To almost create a dream state as we dive into the subconscious.”

Eventually, Roy tries to get his ailing father off the Lima Project and back into the Cepheus to head for home. This requires him to literally tether his father to him.

“The whole idea is the umbilical cord,” Axelrad says. “That scene did develop over time and became more complex. We really felt we needed more of that interaction and the closeness between them. Originally, it was designed that Clifford was stretched out and saying ‘Let me go,’ and Roy cut him loose. As we continued to edit it, it became clear we needed them to get closer and actually physically struggle. The whole idea of it symbolically is cutting off these wounds, this identity you have, a mindset you have, and letting the father figure go. Once he does that, Roy has become enlightened. After that he sees the sun piercing through the rings of Neptune. We feel he’s about to give up, but it provides him a rebirth, which then gives him the will to choose to go back to the ship.”

“It was the emotional climax of the film,” Haugen says, “this moment between the father and son was so huge, we just wanted to make sure we got it perfectly right.”

Ad Astra is in theaters now.